Why You Should Own 'Moat' Stocks and Hold Them Forever
By Chris Mayer
Wednesday, September 26, 2018

At a small, invitation-only investment gathering in New York, I had the chance to speak with Tom Russo.

He manages the Semper Vic Partners fund, which has returned about 14% annually for more than 30 years. That tops the S&P 500 Index by more than three percentage points per year.

Despite all his success, Russo is as humble and as nice a guy as you could hope to meet. I've met him before, and he's always been generous in sharing what he's learned.

Russo spoke about one secret of his success that I'm still having a hard time wrapping my head around.

I'll share this secret with you today. It has to do with patience... and not only deciding which stocks will serve you well over the long term, but what the "long term" really means...

First, a little background: Russo is commonly known as the guy who took Warren Buffett's principles and applied them to overseas markets. In the early 1980s, this was a novel thing to do.

His particular focus was on companies with powerful brands – or "moats," as Buffett said. These companies had a competitive edge that translated into a huge financial safety net.

And then he held them... basically forever, or until he couldn't hold them any longer.

For example, in 1989, Russo began investing in Weetabix, the maker of a rather tasteless cereal, which – for whatever cultural reason – Brits seem to hold as some sort of semi-sacred comfort food.

Anyway, back then, Weetabix traded for less than six British pounds per share. Russo figured it was worth at least 13 pounds per share. He wound up owning almost one-fifth of the company. Eventually, a private-equity group bought Weetabix for 54 pounds per share in 2003. That made Weetabix a nine-bagger for Russo. And he had to sell.

Otherwise, he doesn't sell – pretty much ever.

And here we get to the mind-blowing part. Russo said his average holding period for his top 10 stocks was probably about 25 years.

Let that sink in. Many people can't hold a stock for 25 months – or even 25 days – much less 25 years. With that kind of grip, your portfolio doesn't change much. Russo's doesn't.

When asked about how he manages his portfolio, Russo told a story. He said he has a friend in Boston who was trying to get into an exclusive country club. Year in and year out, he couldn't get in. It had a waiting list.

Well, Russo said his portfolio was a bit like that. Spots open up when something dies. In fact, he just bought a starter position in Alphabet (Google's parent company). It was his first new purchase since... 2010!

But what about technology? Doesn't changing technology make it harder to hold a stock for so long? I would say yes.

In my book, 100 Baggers, I shared some evidence showing that corporate lifespans have been shrinking:

Leaving the S&P 500 doesn't mean the death of the firm. But unless there is a buyout, the S&P usually kicks you out only when you are in trouble – for example, Circuit City, The New York Times, Kodak, or Bear Stearns. Or it kicks you out when you get too small – which is another way of saying you underperformed.

That's why Russo's focus on moats has paid off... along with his extremely long-term holding periods. He selects the best companies that are most likely to last.

I often write about the virtues of buying and holding, patience, and all the rest of it... But Russo has made it an art form. And he's super successful. To beat the S&P 500 by three percentage points per year – for more than 30 years – is a hall-of-fame kind of run.

You have to sit on your stocks and give them time. Don't look at stock quotes every day. Don't fret when they don't go anywhere. Focus on the business.

If the business is good, time is on your side. Hang on.

Editor's note: Chris recently discovered what he calls a huge "no brainer" investment opportunity. It's a stock that could be on the verge of a historic breakout. In fact, once it gets rolling, he believes early investors could make 10,000% returns or more... For more details, check out his exclusive interview right here.

Porter Stansberry recently shared his personal journey to finding the "perfect" kind of investment. To learn how to recognize world-class businesses you always want to own for the long haul, check out his essay: Why I Lost Interest in Deep Value Investing.

"Remember, when you buy a stock, you're buying an ownership stake in a company," Dr. David Eifrig writes. Find out how one simple metric can help you avoid struggling businesses right here: A Simple Lesson on Selecting Winning Stocks.

Market Notes
THE 'DEATH OF RETAIL' IS OVERBLOWN

Today, we’re looking at a company surviving the “retail apocalypse”…

Regular readers know e-commerce companies like Amazon (AMZN) are changing the way people buy goods. Traditional retailers have struggled to keep up – but some are bucking the trend. Today, we look at another company that’s proving retail isn’t dead…

Ross Stores (ROST) operates more than 1,400 department stores in the U.S. The company specializes in discount clothing and home décor. As we recently showed with Dollar General (DG), discount stores are thriving lately… In the most recent quarter, Ross Stores reported net income of $389 million, up around 23% from the same period last year. The company also announced that it’s raising its long-term store count goal from 2,500 to 3,000.

As you can see below, shares of ROST are trending higher. The stock has risen more than 50% over the past year alone, and it recently hit a fresh all-time high. This discount retailer is making it through the “apocalypse” just fine… 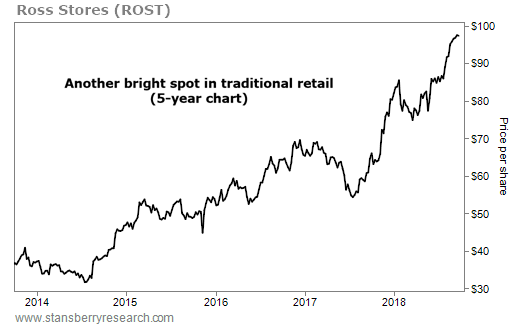