The Craziest Anomaly in Finance
By Steve Sjuggerud
Tuesday, November 26, 2019

In a rational market, it would never be possible. But it's happening today. And it gives us the crazy opportunity to buy the top Chinese companies at a 28% discount.

The core of the story is simple. A number of Chinese companies trade in both Hong Kong and mainland China. That alone isn't unusual... A lot of companies list shares on multiple exchanges in different countries.

It's the next part that's crazy...

While these two listings are for the same exact businesses, they trade at drastically different valuations. Specifically, the shares listed in mainland China (called "A-shares") are 28% more expensive than the exact same stocks trading in Hong Kong (called "H-shares").

This is a crazy situation – and it's setting up a crazy opportunity. Let me share the full details of what's happening right now...

Imagine if tech giant Apple (AAPL) traded in both the U.S. and London... but for some reason, the U.S. listing was 28% more expensive than the London listing.

What do you think would happen?

You know what would happen... Folks would buy up the London shares and sell the U.S. shares. They would "arbitrage" away the difference, pocketing the profits.

This is basically what's happening in China right now. But the discount hasn't gone away. It's still huge for a simple reason...

Most folks around the world can buy or sell shares in Hong Kong. But they don't have easy access to buying and selling Chinese A-shares. The opposite is true as well... Most Chinese people don't stray out of China to buy or sell stocks.

The Hang Seng Stock Connect China AH Premium Index is an index designed to track these valuation differences. It tracks the premium (or discount) of A-shares over H-shares.

This chart shows that, since the start of the year, the valuation difference in identical stocks widened dramatically. Take a look... 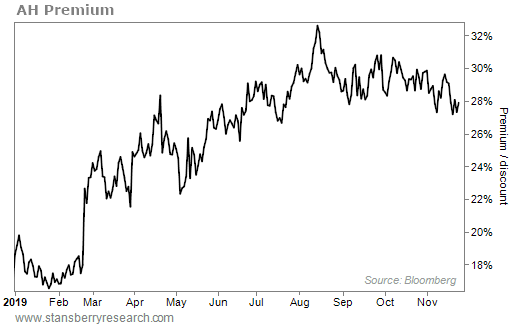 China's A-shares are trading near their largest premiums to Hong Kong's H-shares this year.

Specifically, Chinese blue-chip A-shares that are also available through the Connect platform are currently about 28% more expensive on average than their identical Hong Kong counterparts.

That's a ridiculous situation. And it makes the idea of owning the Hong Kong-listed version of these Chinese companies darn attractive...

Again, it's like buying shares of Apple at a 28% discount, simply because they trade in London.

To me, this is craziest anomaly in finance. Nothing else comes close. But it won't last forever.

China has already started opening up its markets to the rest of the world. And thanks to global index provider MSCI, investors around the globe are getting access to Chinese A-shares for the first time.

This should help end the craziest anomaly in finance. And it means that the time to take advantage of this situation is now.

To do it, you simply need to own a basket of Hong Kong-listed Chinese companies like the iShares China Large-Cap Fund (FXI). The fund holds a basket of H-shares.

Those are the "cheap ones" in this scenario. And that means FXI should offer easy profits as the discount closes in the months ahead.

"Despite what you're hearing in the news, things have been changing for years in China," Brian Tycangco writes. And thanks to a huge decision from Beijing, tens – or possibly hundreds – of billions of dollars are headed for Chinese stocks... Learn more here.

Recent headlines might have you thinking that China's debt is a ticking time bomb. But Chris Igou says this is one case where perception is vastly different from reality – and it could easily lead to triple-digit gains from here... Read more here.

Market Notes
THE RETAIL 'DELIVERY WARS' ARE HEATING UP

Today, we’re looking at a company that survived the “retail apocalypse” with ease…

Regular readers know that online competition has hurt some brick-and-mortar retailers. But others have adapted to an increasingly digital world. Today’s company is thriving as its customers shop online…

Target (TGT) is a $64 billion big-box retailer. It has more than 1,800 stores across the U.S. where customers can buy nearly anything they need. To combat the retail apocalypse, Target began rolling out same-day fulfillment. Now, customers can order products online and pick them up (or have them delivered) on the same day. The company dramatically expanded its same-day services this summer… And the shift is already paying off. Target’s digital sales grew 31% year over year in the most recent quarter.

As you can see in today’s chart, TGT shares have shot up recently. The stock has more than doubled over the past two years, and it recently hit a new all-time high. As long as Target continues to adapt to the digital-retail world, this stock should continue higher… 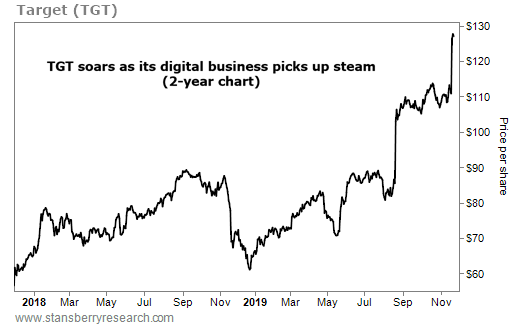