This Changes Everything
By Brian Tycangco
Thursday, November 7, 2019

I first started out as a trader in the Asian stock markets 24 years ago. At that time, I couldn't have picked a more obscure place to learn the ropes.

I remember how the trading floor of the Philippine Stock Exchange had just six price-display panels with spaces for 30 stocks in each. That's a maximum of 180 stocks.

The daily trading volume of the entire market ranged between $30 million and $50 million. Today, tech giant Apple (AAPL) trades an average of $20 billion a day. That's over 400 times more trading activity from just a single stock!

I could count on one hand the number of initial public offerings ("IPOs") that would hit the market each year. And to make matters worse, the tiny market volume that existed was dominated by a mere dozen or so blue-chip stocks.

Each had 50 different analysts covering them. And they knew this handful of companies inside out.

Incredibly, there were times when some of my well-connected clients knew more than I did about what was going on in a particular company. So yes... some traders were taking stock tips from their own clients.

It was absolutely ridiculous. And it was one of the key reasons why I left the trading floor and went on to research.

Still, spending a few years in this tiny corner of the world taught me a lot about what it takes for markets to grow. And it's no surprise that China, one of the most exciting markets in the world, is going through some big changes right now.

Let's get into the details...

Meanwhile, the 30 giants that make up the Dow Jones Industrial Average have changed many times. More than half of the current group weren't even there just 20 years ago.

It's not that all the companies they replaced disappeared. There were simply other companies that became leaders in their respective industries, and grew much faster.

You may not believe it, but China's stock market was once as insignificant and dreary as the one in the Philippines.

After it launched in 1991, the Shanghai Stock Exchange saw average daily trading volume of less than $1 billion... for more than a decade.

That's despite the country going through one of its fastest periods of growth in history. It averaged 10.5% annual growth over that period... And the number of listed stocks exploded 80-fold.

But despite what you're hearing in the news, things have been changing for years in China. Average daily volume in the Shanghai Stock Exchange is now as impressive as anywhere on the planet. And the growth since 1991 has been monumental, as you can see in the chart below... 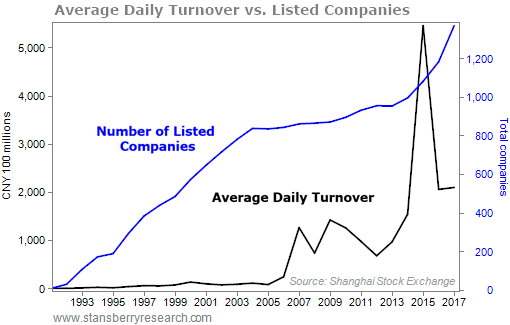 This growth is partially due to foreign investors. In 2002, Beijing opened its domestic stock market to foreign investments through a Qualified Foreign Institutional Investor ("QFII") program.

A couple of months ago, Beijing decided to get rid of these limits altogether. It was about time.

That's because China today is a much bigger, broader market. It has more than 3,500 listed companies on its exchanges. And its 10 largest companies have market capitalizations well over $100 billion.

The biggest listed stocks are no longer limited to old, stodgy state-run behemoths, either. They now include well-run consumer stocks like Kweichow Moutai and Wuliangye Yibin (liquor companies), or Midea and Gree Electric Appliances (appliance companies).

As regular readers know, a new stock exchange called the STAR Market launched in July. It started with 25 companies. Today, it has 46 companies trading with a combined market cap nearing $100 billion.

Beijing also scrapped the foreign ownership limits it had put on the world's financial companies. And these combined efforts are resulting in tens – possibly hundreds – of billions of dollars sweeping into Chinese stocks. Investors all over the world are starting to pay attention and looking to get in.

In short, China opening up to foreign investments hasn't been getting headlines. But it's changing everything about China's stock market. And it's changing for the better.

P.S. A big part of this idea is the massive money shift into China thanks to MSCI, the world's leading index provider. It's a complicated story, but it should cause a trillion dollars or more to flow into Chinese stocks in the coming years. My colleague Steve Sjuggerud recently put together a presentation to outline exactly what's happening... You can watch it for free right here.

Get the details from Steve and Brian on the launch of China's new STAR Market – and what this "New Nasdaq" means for investors – right here:

Market Notes
A 'PICKS AND SHOVELS' STANDOUT IN INFORMATION TECHNOLOGY

Today, we’re looking at a thriving “picks and shovels” play on the technology sector…

Longtime readers know what we mean… During a gold rush, some miners will get rich and some will go broke, but they all need to buy the tools to do their jobs. These days, a good picks-and-shovels business provides valuable tools to whole sectors and industries. And few tools are more valuable than information technology…

CDW (CDW) is a $19 billion supplier of computer hardware, software, cloud-computing solutions, and similar goods and services. Its customers can choose among 250,000-plus products from more than 1,000 brands. And it sells to a diverse range of businesses, government agencies, schools, and hospitals. CDW doesn’t care who makes the most money – because everyone needs IT solutions. The company saw record sales of $4.9 billion in the most recent quarter, up 12% year over year.

CDW shares have more than quadrupled over the past five years, and they recently hit new all-time highs. That’s the power of selling the right tools at the right time… 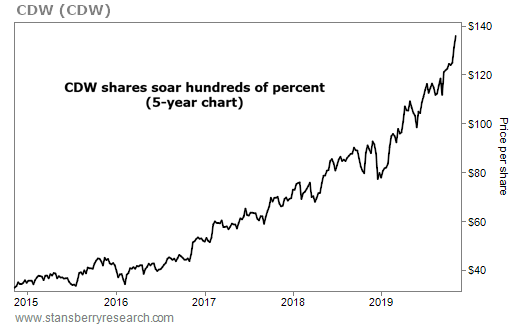