Steve's note: For the next two days, we're giving the floor to Matt McCall at our corporate affiliate, InvestorPlace. In the last decade alone, Matt has pinpointed more than 200 triple-digit winners ranging from 100% to 965%. His strategy is exactly right for the late stages of this bull market. And he's looking at several big growth opportunities right now – including the one you'll see below...

In the pages of my Early Stage Investor service, readers often hear the term "10X."

As a rule of thumb, our early stage, "venture capital" style investments are only in industries with the real potential to grow tenfold (or "10X") in size.

Investing in industries with huge growth potential and gale-force tailwinds at their backs is how you set yourself up to make giant returns. Think of the Internet in the 1990s... personal computers in the 1980s... and smartphones over the past decade.

However, in a research report I recently sent to readers, I detailed an industry set for not just 10X growth... not 20X growth... and not even 50X growth... but at least 100X growth.

This is undoubtedly one of the best early stage investment opportunities you'll ever see in your life. Best of all, we get to partner with one of the world's most powerful wealth-creating groups – one with a stunning track record.

If you've been reading Steve Sjuggerud's work for a while, you won't be surprised to hear where this opportunity is located. More on this in a moment. But first, let me show you some incredible numbers...

Wall Street hedge funds and banks can create all kinds of complex investments and strategies that only a math genius can make sense of.

However, sometimes making great investments is laughably simple. That's the situation with the industry I'll share with you today.

The big opportunity here boils down to just one number...

Specifically, 116-fold growth is the amount of growth the Chinese government has planned for its biotechnology sector over the next two years.

In 2017, the Chinese government announced that its domestic biotechnology sector should make up 4% of the country's gross domestic product ("GDP") by 2020.

The Chinese economy is projected to reach roughly $15.7 trillion (as measured by GDP) by then. As of 2017, the revenue generated by China's domestic biotech industry was only $5.4 billion, according to Goldman Sachs.

You see, China is well-known for its large and growing capitalist – yes, capitalist – economy. In the 1970s and '80s, China was extremely poor and undeveloped. But thanks to capitalism, China is now the world's second-largest economy.

China puts its own unique twist on capitalism. Although the country is technically capitalistic, it's also authoritarian. The Chinese government exerts a LOT more control over the economy and its domestic companies than the U.S. government does. To allow its domestic companies to grow, the Chinese government often blocks U.S. companies from doing business or gaining influence inside the country. (Google and Facebook are not allowed in China, for example.)

China also likes to create "national champions"... huge companies that have the implicit backing of the Chinese government. Competing with China's "champions" inside China is extremely difficult and often impossible.

China wants to compete on the highest levels – and dominate – all the critical industries of the future. This includes having a huge domestic biotechnology industry that develops and sells the medical treatments and therapies of the future.

When the Chinese government says it's targeting one of its domestic industries for massive growth, it pays to listen. The country's track record of creating huge returns for investors is impressive...

For example, starting in the late 1990s, the Chinese government went on an infrastructure building spree. It built dams, bridges, cities, power plants, highways, and ports on a scale never seen before in history. All that building consumed an incredible amount of natural resources like oil, coal, copper, cement, and iron ore.

The big Chinese oil firm PetroChina was just one of the winners during the infrastructure boom. PetroChina literally helped fuel China's massive growth... And the stock grew 17X from its initial public offering ("IPO") in 2000 through its high in 2007.

Or consider the results of China's push to create a strong domestic technology sector. This push began about 10 years ago.

One of the companies that enjoyed government support during that time was a little-known firm called Tencent. Tencent gathered assets and extended its influence into many aspects of China's economy. Today, Tencent is one of the largest companies in the world. The stock rose an eye-popping 67,000% from its IPO in 2004 through January 2018.

From an investing point of view, overzealous government spending in China is a good thing. Even if the goals are too lofty, there is no denying the power of the Chinese government to boost an entire industry and related stocks.

Now you see why I paid close attention when I learned how strongly the Chinese government is pushing its biotech industry.

It is determined to put the industry on the same level as U.S. biotech... and do it in just a few years. This will require the Chinese biotech industry to grow more than 100-fold.

I believe the Chinese government's public-relations team got carried away by saying it wants this level of growth by 2020. I think five to seven years is more realistic.

But 100-fold growth in even 10 years will make the Chinese biotechnology sector one of the greatest growth stories in modern history. I'm willing to be patient for life-changing returns.

Tomorrow, I'll tell you about the nine specific catalysts that make China's biotech industry an incredible wealth-building investment opportunity... Plus, I'll describe my strategy for buying the best companies in the sector to ensure you get the most profit with the least amount of risk.

Editor's note: Matt's 10X strategy goes far beyond China. He has been able to pinpoint triple-digit winners from every corner of the market – including several that soared more than 1,000%. That's why we decided to team up with our corporate affiliate so he could join us for one night only... and walk through his five steps to uncovering these opportunities. Learn how to watch the event on Wednesday, July 31 by clicking here.

"It's undoubtedly the most impressive GDP growth ever recorded in such a short period," Brian Tycangco says. He's talking about China. And more important, the country's powerful economic growth means Chinese stocks are set up for a powerful rally... Read more here.

"China's 'New Nasdaq' stock exchange started trading on Monday," Steve writes. "The average stock on this exchange soared by 140% – on day one." Learn more about this breaking story right here.

Market Notes
THE 'PICKS AND SHOVELS' OF THE E-COMMERCE WORLD

Longtime readers know “picks and shovels” businesses serve competing companies within a given industry. When you sell mining tools during the Gold Rush, you can profit no matter who strikes it rich. And when you sell e-commerce tools in today’s digital world, you can make money no matter which online business takes off. Today’s company is doing exactly that…

Shopify (SHOP) created a platform for merchants to set up and manage their own online stores. It charges a monthly subscription fee – plus a cut from most sales. In the first quarter, Shopify’s 800,000-plus clients sold nearly $12 billion worth of products through its platform. That’s a whopping 50% increase over the same period last year. And Shopify’s own revenue also jumped 50%… hitting more than $320 million.

As you can see, shares are up more than 90% over the past year, and they recently hit a new all-time high. This company isn’t yet profitable, but as the world keeps buying things online, more and more cash will flow to this “picks and shovels” business… 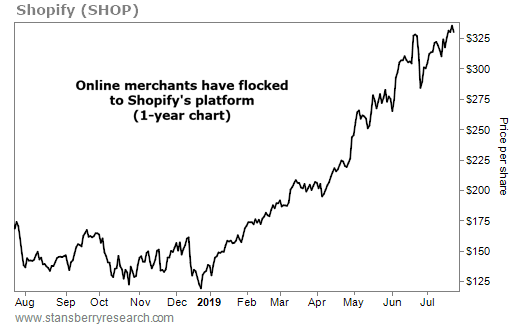