The Biggest Catch-Up Story of the Decade
By Brian Tycangco
Monday, July 8, 2019

Steve's note: Today, I'd like to introduce a new member of our team, Asia-based analyst Brian Tycangco. Brian has been in finance since 1995. He has met with leading CEOs in every industry in Asia... And he knows all the ins and outs of making money in the region. More important, he's a humble, great guy, full of fantastic ideas... So expect to see a lot more from him in DailyWealth!

It was the only Christmas Eve people wish they could forget...

Even worse, by market close on Christmas Eve, the S&P 500 was in bear market territory, down almost 20% from its recent high.

But then, stocks stopped falling. The stock market rallied immediately after Christmas. It hasn't looked back since.

Markets can be wildly irrational in the short term. They swing up and down, driven by recent events. But over the long term, the economy is far more important to stock prices.

That's true in the U.S., at least. But in one major market, it hasn't always been the case... And it could lead to the biggest catch-up story of the decade.

Crazy market swings like we saw last December probably shouldn't happen, but they do.

Investors tend to get distracted by the news at hand... They get too excited about the good news, and too negative about the bad news. So in the short run, fear and greed rule over logic and reason.

The good news is, markets tend to be more rational over the long run.

They ultimately reflect the fundamentals of the economy. And if the economy is growing, then stocks should generally trend higher. 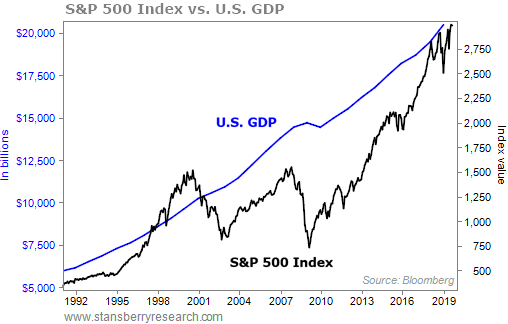 That's why today, a little more than six months after the December sell-off, stocks are once again near record highs.

The economy and the stock market are closely linked – at least over the long term. And it's not just the U.S. This is true for most places in the world.

But there's one place where the stock market has hugely underperformed the economy... And it's setting the stage for a major catch-up rally.

That place is China.

The disparity between China's economy and stock market just boggles the mind.

This is an economy that's managed to grow 35-fold since 1990. It's undoubtedly the most impressive GDP growth ever recorded in such a short period.

China has lifted more people out of poverty than there are people living in the U.S.

China now has the world's largest car market, the biggest housing market, the largest mobile phone and Internet market... And it's the No. 1 market for many other products I don't have time to mention today.

But the country's stock market has managed to grow just 24-fold since it started operating in December 1990.

That works out to a 1,100% gain advantage in China's economy versus its stock market. Take a look... 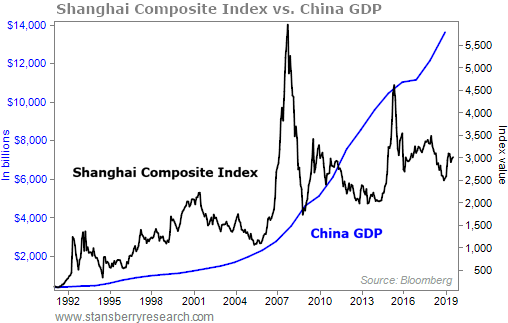 With the Chinese economy still humming along at 6% a year, that performance gap is only going to get bigger – unless we see a major move higher in stocks.

And that's exactly what I expect will happen.

It's possible thanks in part to one massive investing story. My colleague Steve Sjuggerud has been pounding the table on it for years...

Longtime DailyWealth readers are familiar with global index provider MSCI. This year, it plans to quadruple the weighting of Chinese A-shares in its indexes. (A-shares are stocks that trade locally in mainland China.)

This should be a powerful catalyst. Estimates say it could send $80 billion to $125 billion of new investment dollars flowing into Chinese A-shares this year.

That's the equivalent of investing up to an additional $800 billion into U.S. stocks in a single year. (For context, the highest amount of inflows the U.S. has ever received was $275 billion in 2007.)

But because the MSCI increase is happening over three stages – instead of one massive quadruple increase – the inflows are likely to result in a gradually rising tide, not a tsunami.

That's wonderful. It means investors have time to position themselves to take advantage of this opportunity.

Markets are often irrational in the short term... But over the long term, rationality usually wins. China's stock market needs to soar to catch up with its economy. And thanks to MSCI's massive inclusion of A-shares, that's exactly what's likely to happen.

It could be the biggest catch-up story in stocks this decade. Don't miss it.

P.S. The economic shift happening in China is a once-in-a-lifetime opportunity for investors. I can't emphasize this enough... In fact, that's why I appeared in Steve's feature-length documentary, New Money. If you haven't seen the film yet, I urge you to watch it now. You'll get a boots-on-the-ground look at the transformation in China... And you'll hear from some of the world's top investors. Rent the movie for just $5 right here.

"Most investors are dead wrong about China today," Steve says. Don't let trade-war tensions fool you. As he explains, China's incredible growth is far from over... Get the full story here.

"Mobile payments didn't really exist in China only five years ago," Chris Igou writes. "Now, they're ubiquitous." Learn more about the "cashless" revolution in China – and how investors can profit in the U.S. – in his two-part series here and here.