Steve's note: Today, we're sharing an essay from George Gilder. George is one of the world's top technology futurists. He predicted the rise of smartphones 13 years before the first iPhone. Now, he's sharing his next big idea... along with the three steps he uses to find "moonshot" tech stocks poised to take off.

Also, our offices are closed tomorrow in observance of Independence Day, so our next issue of DailyWealth will publish on Friday. Enjoy the holiday!

The infrastructure of the Internet as we know it was built for a simple purpose: sharing information.

But as you know, we now use the Internet for much more than sharing ideas.

We send money. We log in into bank accounts. We enter our Social Security numbers. We make video conference calls with colleagues.

Yet the infrastructure of the Internet hasn't been upgraded since its inception. And we all know the result: a cybersecurity nightmare.

Of course, online vendors don't like when this happens. But it's only an inconvenience for them... The true burden falls on the consumer.

You're the one in charge of replacing credit cards, switching accounts, and dealing with the fallout. So there's no incentive for the Googles, the Facebooks, or the Amazons of the world to change anything.

But the change won't come from them. It'll come – and sooner than you think – from a new technology that's creating an explosion of new possibilities.

Today, I'll tell you what it is. But first, for us to appreciate everything Internet 2.0 will provide, I need to reveal why the current system is so fundamentally flawed...

For information to travel across the Internet, it must be copied. Yes, the Internet is a gigantic copying machine. And it's very efficient for sharing data and documents.

Now, when these transaction entities communicate across the Internet, they have to be translated into readable forms... as in forms of communication that hackers can capture.

Of course, this structure was so vulnerable that the big companies doing transactions — Google, Amazon, Facebook, and eBay — created "walled gardens" for their own commercial domains. Their mostly locked-in users could do business within those spaces... all secured with an individual login and password.

Over time, the Internet divided into these pyramids regulated by a few giant companies. Within these segments, the big companies collected more and more private data. And they protected the data with firewalls and encryption.

But as time passed, they discovered that centralization is not safe either.

Instead, it actually solved the biggest problem that hackers face. It tells them exactly what's important, and where it is.

It's like storing your entire nest egg in a giant safe with a blinking sign... in your front yard.

This is the key weakness of all centralized security and the classification systems that come with it.

Centralized security is not the answer. So what is?

The solution is distributed security.

Back when I started in the '90s, computers had a megabyte of memory – and we thought they were super computers. Now, every smartphone has gigabytes of memory, and it's connected to terabytes of memory in the cloud.

Thanks to these advancements, we can do something that was impossible before... We can distribute a compressed version of all monetary transactions that happen online – and put them into a particular blockchain.

Now, most people associate blockchain with bitcoin. But it's much more than that.

It's a ledger that distributes all the personal information across the network. It's not in giant data clumps. The blockchain provides a time-stamped, immutable record of all the transactions that have occurred in a particular transactional arena.

And here's why that's a breakthrough for Internet security...

The record is distributed to every node in the network. So the information isn't in one place — where it's surrounded by hackable surfaces.

Instead, a hacker would have to attack all the records of the transactions across the whole Internet before they can change anything or steal anything.

That's the power of the blockchain. It gives us an immutable record of time-stamped transactions, important documents, or classified data... And it secures that record by distributing it across the entire Internet rather than putting it all in one "safe."

What will this new Internet infrastructure mean for you?

For starters, you won't have to learn a separate username and password for all the vendors on the Internet. No sets of security questions. No entering the last four digits of your Social Security number.

Instead, the burden of security now falls to the companies.

They'll need to master all the private keys of all their customers – not the other way around. Because data, including your identity, will be verified and distributed everywhere, not just in a particular walled garden.

You'll be in charge of who can access your data. In fact, you'll be able to charge people for using your immediate data. No more watching ads on YouTube without receiving something in return.

And the whole system becomes more secure and more responsive to your own needs and your own security.

All this is why the blockchain will be fundamental in the years to come. And investors will have several ways to profit as this Internet shift emerges.

Editor's note: George says blockchain technology is much bigger than cryptocurrencies... And he believes early investors could make a fortune over time – potentially from only a handful of investments. That's why he recently held a special investing summit to explain "Internet reboot"... Plus, he revealed how three simple steps that have helped him discover moonshot opportunities in tech stocks. You can find more details right here.

You probably know blockchain as the technology behind cryptocurrencies like bitcoin. Cryptos are volatile investments... But Eric Wade says a boom is setting up in these new assets. Read more here: Three Reasons the Crypto Boom Is Just Beginning.

"You've likely been the victim of at least one cyberattack, identity theft, or phishing attempt," Christian Olsen writes. These attacks have been spreading in recent years... But a few precautions can help you protect your data. Learn more here: Four Simple Steps to Protect Yourself From a New Type of Crime.

We love to see companies with hard-to-match expertise. And if they can apply their expertise to more than one industry, so much the better! Companies that can successfully diversify their businesses are protected if one segment faces headwinds. And when everything goes right, they reap the benefits…

Just consider Ball (BLL), a $24 billion master metalworker. This 139-year-old company started out making tin cans. Today, aluminum beer and soda cans are still its big moneymakers. But it also has a flourishing aerospace division, which makes everything from sensors to entire satellites… And it has a $2.1 billion backlog of orders under contract. All told, Ball raked in $2.8 billion in sales for the most recent quarter. And while the company reported flat earnings year-over-year, Wall Street projects double-digit growth ahead.

The market is clearly on board. BLL shares have roughly doubled over the past year… And they just hit new all-time highs. As Ball delivers on its aerospace contracts and keeps cranking out beer cans, this stock should keep climbing… 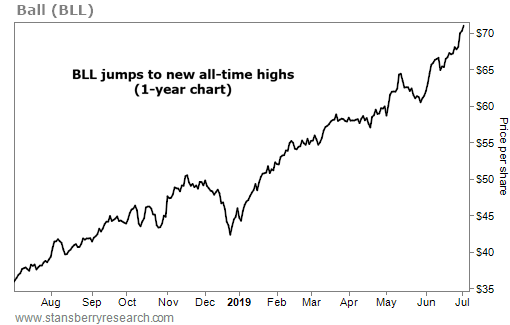