Three Reasons the Crypto Boom Is Just Beginning
By Eric Wade
Wednesday, May 1, 2019

Steve's note: Cryptocurrencies are famously volatile. If you're dipping your toe into these investments, you absolutely need a guide you can trust... And in my book, Eric Wade of Stansberry Pacific Research is one of the best. As an investor, he has made big profits in cryptos, with multiple 10-baggers to his name. Read on to learn what he's saying today...

You won't hear about it in the mainstream media... but the cryptocurrency revolution is just getting started.

What you don't hear about is how investors, developers, and entrepreneurs are all laying the groundwork for a tectonic shift in finance.

So today, I'm sharing three reasons why I believe the crypto revolution is just getting started...

Cryptocurrency ownership is growing, despite the 2018 price plunge.

Last year, the CEO of one of the world's most important crypto companies, Blockchain, tweeted that the company was adding approximately 50,000 users per day. And that was during the longest bear market in bitcoin's history.

All told, about 8% of adults across 15 countries own or have owned cryptocurrency (per a recent survey by banking giant ING), and more than 20% of respondents said they "expect to own cryptocurrency in the future."

By 2017, there were roughly 11 million. And today, there are more than 35 million wallets. These are the numbers through the end of last year... 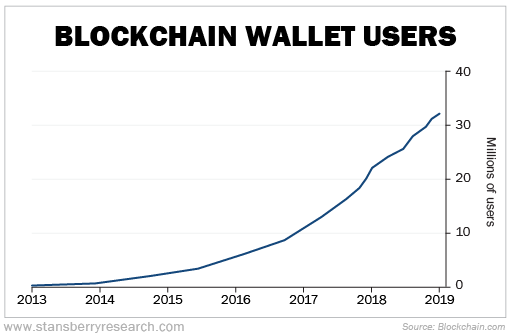 Cryptocurrency investors are following a well-established pattern. We are in the early adoption phases of this innovative technology, with tremendous growth ahead.

Hedge-fund managers and venture capitalists are pouring cash directly into cryptocurrency startups. This money is meant to help businesses build out the new services, technology, and hardware required to push cryptocurrencies into the mainstream.

And the rate of investment in cryptocurrencies is picking up steam, according to the cryptocurrency news site Coindesk. Venture capitalists invested about $2.5 billion into the industry in 2017. As of third-quarter 2018 – the most recent data available – they had invested more than $4.5 billion. 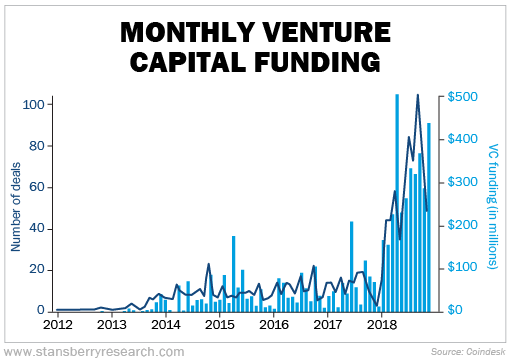 Large corporations are also making their own investments in cryptocurrencies. For example, tech leader Microsoft (MSFT) has been offering cryptocurrency-based products to its large corporate clients since March 2016.

Even the owner of the New York Stock Exchange – Intercontinental Exchange – is launching its own bitcoin exchange. Called Bakkt, the startup has joined forces with coffee giant Starbucks (SBUX) and Microsoft, among many others, to build out an exchange and eventually a cryptocurrency payment network.

If the exchange receives regulatory approval, this could be a huge catalyst for investment. Which brings us to...

China banned cryptocurrency trading in 2017. Many people predicted other countries would follow suit.

That hasn't happened, though. While regulations are still pending in the European Union ("EU"), most developed nations have taken a "do no harm" approach to regulating cryptocurrency (beyond stamping out obvious instances of fraud and illicit activities).

There are two big reasons for this. First, it's difficult – if not impossible – to stamp out cryptocurrency trading. China has seen this firsthand. Regulators there forbid financial institutions from holding or trading cryptocurrencies. To get around the ban and access offshore cryptocurrency exchanges, individual traders have simply started using Virtual Private Networks (VPNs) – networks that give them the ability to make it look as if their web traffic is coming from a different country.

Second, there are very real dangers to overregulating the industry. If the U.S. implements stricter cryptocurrency rules than the EU, for example, it could stamp out associated potential technological innovation. Entrepreneurs might relocate, and the country could cut itself off from new tax revenue streams.

China has seen this, too. When it cracked down on cryptocurrency mining (the process of running computers to verify transactions and solve mathematical problems in exchange for a payout in cryptocurrency), miners simply moved their expensive computers offshore.

Compare that to the northern European country of Estonia, which has seen an economic boom thanks to its pro-crypto stance. Estonia has implemented favorable regulations and crypto tax rules in recent years, which created a business-friendly environment for crypto startups and mining companies.

In short, the amount of capital and talent that's entering the cryptocurrency industry is staggering. Governments don't want to turn away those investments.

We're witnessing the birth of several transformative technologies. The crypto boom will be one of the greatest bull markets of our lifetimes. And I believe the best is yet to come.

Editor's note: Eric says a one-time event is coming that will completely transform the crypto markets. This turning point could cause a wave of money to flow into the space... And a handful of specific cryptos could soar 500% or more as it all plays out. But this opportunity won't last long... Read the full story here.

"The global financial system relies on decades-old technology," Eric says. "Financial institutions that rely on antiquated ways of doing things are going to have to adapt... or become obsolete." Learn more about the potential for cryptos to revolutionize banking right here.

"When it comes to crypto assets, make no mistake – the responsibility is well and truly yours," Eric writes. "And the safety nets that do exist are the ones that you are responsible for setting up yourself." Investors need to take the right precautions... Check out Eric's simple tips right here: Three Critical Steps to Take When Investing in Cryptos.

Today, we’re highlighting a player in a major disruptive trend…

Cloud technology helps deliver computing services over the Internet. It’s a huge trend for investors – research firm Gartner estimates the cloud-computing market will be worth $411 billion by next year. That’s nearly double what is what worth in 2016… And it means today’s company should continue to benefit…

RingCentral (RNG) is a $9.5 billion software and cloud-computing provider. Its main focus is cloud-based communication systems for offices. Employees can use RingCentral’s software for calls, texts, and online meetings, all on the same platform – even when they’re out of the office. And they can collaborate easily on projects shared over the cloud. Demand for these services is growing today… Last year, RingCentral reported revenue of more than $673 million, up 34% from 2017.

As you can see in today’s chart, RNG shares are soaring. The stock is up more than 500% over the past three years, and it recently hit a fresh all-time high. As the cloud-computing market continues to grow, RingCentral should continue to succeed… 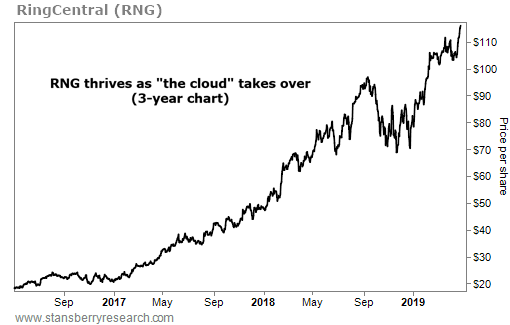