Steve's note: I am cautious when it comes to cryptocurrencies. But to serve you best, I'm always looking for moneymaking opportunities to share here in DailyWealth. Right now, my colleague from Stansberry Pacific Research, Eric Wade, predicts bitcoin could surge to new all-time highs – and soon. If you're interested in crypto investing, be sure to read what he has to say...

Banks are the whip and buggy of the technology era.

We can video chat in real time with anyone on earth. Self-driving cars can escort passengers across town. Satellites thousands of miles above the earth can pinpoint our location within inches.

Yet it still takes three days to send money from, say, Chicago to Mexico City.

That's because the global financial system relies on decades-old technology.

Blockchain and cryptocurrencies are changing that. They threaten not just the old way of doing things... but entire business models. And the banking industry is first in line.

Financial institutions that rely on antiquated ways of doing things are going to have to adapt... or become obsolete.

Today, I'll show you why. And I'll explain what this means for the future of cryptocurrencies...

The most obvious financial system for disruption is international money transfers. The World Bank estimates $689 billion will flow across borders in 2018, as migrants and immigrants send money home (what's known as "remittances").

Fees on those money transfers range anywhere from 5% to 9% (or even higher for small-sum transfers). Those fees generate more than $30 billion in revenues per year for financial institutions.

Cryptos are designed to transfer money with low costs, nearly instantaneous transactions across borders, and increased security, reliability and flexibility.

But banks have resisted innovations like this. It's hard to blame them. They're sitting on a $30 billion cash cow. That's probably part of the reason why many banks have expressed skepticism (even hatred) toward cryptos.

For example, Jamie Dimon, the CEO of JPMorgan Chase, has called bitcoin "stupid" and a "fraud", among other things.

But not everyone is blind to crypto's potential. Even the International Monetary Fund (IMF), the very definition of a slow-moving financial bureaucracy, is looking into how cryptocurrencies can interact with central banks. Recently, it said central banks may issue their own cryptocurrencies one day.

"Above all, we must keep an open mind about crypto assets and financial technology more broadly, not only because of the risks they pose, but also because of their potential to improve our lives," IMF Managing Director Christine Lagarde said.

Whether or not banks want it, crypto technology is already changing the banking world...

For example, in early October, an international money transfer platform that's as much as 70% cheaper than existing solutions launched consumer testing. On this platform, it doesn't take days to move money across international borders... it takes seconds. And it's powered by crypto.

The platform also frees up large chunks of capital for banks. No longer will they have to fully prefund accounts in local currencies, leaving it there in anticipation of future transfers.

Now, local currencies can be converted into crypto, instantly sent around the world, and converted back to whatever local currency the recipient desires. That gives banks access to cash they'd once left sitting in foreign bank accounts.

Consider what happens if a company wants to move money between Mexico and the European Union. It currently takes two to three days to send $1,000 across the Atlantic, and it costs between $40 to $75. With crypto and blockchain technologies, that same transaction can be completed in two minutes at a cost of $0.02.

It's a huge step forward, with staggering implications.

If you look at overall global money flows, more than $155 trillion crosses international borders every year. And these cross-border international money transfers generate some $300 billion in revenue for banks, according to management consulting firm McKinsey & Company.

It's a matter of time before crypto and blockchain technologies prove they can save banks and consumers huge sums of money and time. As more banks come on board, we'll see even more benefits.

Faster transfers will lead to accelerated money velocity – the pace at which money changes hands. That, in turn, will speed up international business, boost productivity, and ultimately accelerate innovation.

In this new environment, the earliest adopters will see the biggest profits – while driving down costs for consumers. Slower-moving banks will be forced to adapt or lose their customers. (After all, a customer doesn't care about the technology behind a bank. He just wants services to be reliable, fast, cheap, and easy to use. If a bank can't keep up, the customer will go elsewhere.)

Revolutions don't always start with a bang. Some start small, gathering strength and speed until they're so big that anyone committed to the old way of doing things is swept aside.

Crypto is small now, but I'm certain it will revolutionize the way we bank. And it'll happen far faster than anyone suspects.

When it does, cryptocurrencies like bitcoin will finally go mainstream. And that means now is the perfect time to invest in these unique assets.

Investors who get in ahead of this big shift could earn spectacular gains. Don't miss out.

Editor's note: Eric predicts a huge change for cryptos will occur as soon as January 24, causing a wave of institutional money to flow into these assets. Bitcoin could soar to a new all-time high above $25,000... And major cryptos could "re-price" as much as 10 times higher within days. Get the full story right here.

"Blockchain does have one perfect application," Alan Gula writes. Get the details on how recent developments in bitcoin and blockchain could mean investors are near one of the best opportunities to buy right here.

"If you're thinking about getting on board an exciting, speculative opportunity like bitcoin, then you need to read this," Dr. David Eifrig writes. "It could make the difference between a life of incredible wealth, or crushing debt." Learn more here: Exactly What to Do With Your Money Today.

Market Notes
FOR TODAY'S NEWSPAPERS, IT'S 'DIGITAL OR BUST'

As longtime DailyWealth readers know, the “digital revolution” continues to disrupt many traditional businesses. For decades, newspaper circulation has steadily declined. And while the New York Times (NYT) has managed to grow digital subscriptions into the millions, other media businesses haven’t been so successful…

Just take a look at Gannett (GCI), the largest newspaper publisher in the U.S. by daily circulation and owner of USA Today. Since spinning off from broadcasting company Tegna (TGNA) in 2015, Gannett has tried to become a digital business. But management has acknowledged that declines in its print revenues will be difficult to offset. And while Gannett reported a 50% rise in digital-only subscriptions during the last fiscal year – topping 340,000 – the company recently cut its revenue forecast for 2018.

As you can see, GCI stock has fallen more than 20% over the past year. Shares recently hit a new 52-week low. Gannett could still adapt, but the journey to digital might be painful for shareholders… 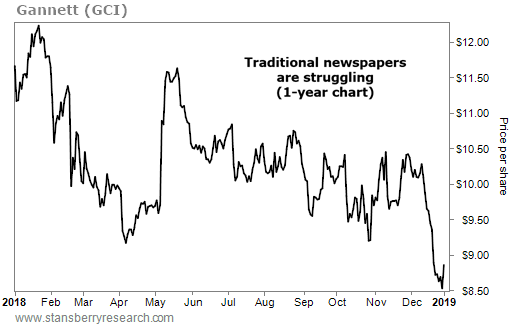