How to Profit From America's Shift to Mobile Payments
By Chris Igou
Tuesday, June 4, 2019

It's like a lot of other credit cards, offering a lousy 1% cash back on all transactions when you swipe your card. But that's not the interesting part...

In other words, the card will reward folks who use Apple's mobile-payments system.

Amazon has even come out with plans to open as many as 3,000 "Amazon Go" stores by 2021. These stores don't have any cashiers. You just grab your things and walk out the door, and you're charged what you owe through an app on your smartphone.

Mobile payments are no longer just a futuristic idea for American citizens, as I explained yesterday. They're actually here.

So today, I'll share the biggest reason this trend will keep growing in the years ahead – and a simple way you can profit...

In 2018, 55 million people in the U.S. used mobile payments. By the end of this year, that number will rise to nearly 62 million. But importantly, that's still less than 20% of the population.

I believe we'll see continued growth, once the average American becomes educated on this simple fact: Mobile payments are safer and more secure than paying with credit cards or cash.

This is where Americans' perceptions are furthest from reality. People assume mobile payments aren't secure. But that simply isn't the case...

You see, one thing makes mobile-payment options among the safest ways to handle a transaction. It's called "tokenization." It sounds technical. But all you need to know is that it means your personal payment information never gets used.

Through the tokenization process, a unique number is generated that won't be used again. This digital representation – or "token" – takes the place of your actual card information.

Swiping a credit or debit card still makes your name, card number, and expiration date vulnerable throughout the payment process. Hackers can grab your data from store databases. We've seen this play out time and time again over the past several years.

Using a mobile-payment app is far superior to swiping a card in terms of security. And that's why, as folks wake up to this fact, I expect growth to continue rapidly in the years to come.

So how do we profit from this major trend?

Well, we're still in the early stages of this revolution. And the winners aren't completely clear at this point. But that's OK...

If you don't want to gamble on which company will dominate the market over the next three to five years, you can "play the field" with the ETFMG Prime Mobile Payments Fund (IPAY).

IPAY is an exchange-traded fund that you can buy like any stock... And it holds a broad basket of companies that focus on mobile payments.

For example, digital-payment giants PayPal (PYPL) and Global Payments (GPN) are both in IPAY's top 10 holdings. So are credit-card giants Visa (V), Mastercard (MA), and American Express (AXP). And mobile-payments player Square (SQ) is a key part of this fund, too.

These are companies in the thick of this revolution... And their long-term success depends on getting it right.

You don't need to pick the winners to make money as mobile payments become more popular in America. You can play the field. If you're looking to take advantage of this explosive opportunity in the years ahead, IPAY is the simplest way to do it.

P.S. My colleague Steve Sjuggerud first experienced the potential of mobile payments when he visited China a few years ago. He came back with a recommendation that ended up doubling in a year. Now, he's back from his latest China trip, and he's fired up once again... Get the details on how a crucial change happening this year could create a boom in a handful of China's most innovative tech companies right here.

Catch up on Chris' DailyWealth essay yesterday about how the foundation of the mobile payments trend has already been laid – in China – right here: The Next Tech Trend in America Is Already Starting.

"I just got back from my most recent China trip," Steve says. "And once again, the changes and advances blew me away." Don't let misperceptions of China scare you away from investing... The country is not what you'd expect. Learn more here: What Americans Fail to Grasp About China.

Market Notes
THE CLOUD-SERVICES TREND IS STILL PICKING UP STEAM

Cloud technology delivers computing and data services over the Internet using remote servers. This trend may be one of the biggest around… Research firm Gartner projects that the worldwide public cloud-services market will grow 17.5% this year, totaling more than $214 billion by the end of 2019. Today’s company is perfectly positioned to succeed in this shift…

Veeva Systems (VEEV) is a $22 billion cloud-services giant. Its cloud-based software helps life-sciences businesses manage critical tasks like customer management and data storage… And it boasts some of the world’s largest pharmaceutical companies as customers, including Merck (MRK), Eli Lilly (LLY), and Novartis (NVS). In the first quarter, Veeva reported sales of roughly $245 million, up 25% over the same period last year. Clearly, major drug companies are flocking to the cloud…

As you can see in today’s chart, VEEV shares recently hit new highs. The stock has nearly doubled over the past year alone. As long as the cloud-computing trend stays strong, this company should continue to thrive… 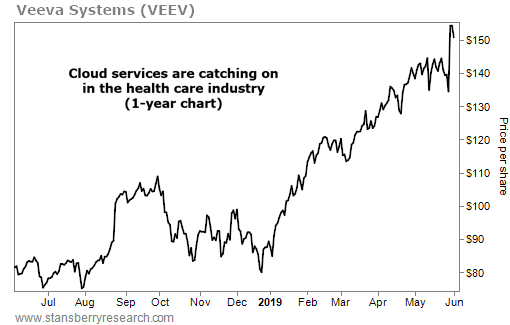