This Could Change the Future of Crypto for Decades to Come
By Eric Wade
Friday, May 3, 2019

Steve's note: I'm not an expert on cryptocurrencies like bitcoin – and I don't want to "fake" that I am. But if you want to understand these new assets, Eric Wade of Stansberry Pacific Research has you covered. Today, he says a recent development could be a promising step forward for the U.S. crypto industry...

Wyoming may be the least populous state in the U.S... but it could soon become the world's new "Crypto Valley".

Crypto entrepreneurs have come running to the state, thanks to regulation Wyoming passed in March 2018. Those changes made it easier to start crypto-related limited liability corporations ("LLCs"). Now, as many as three new crypto-related LLCs are launching in Wyoming every day.

But that was just the beginning. Wyoming recently passed a new bill that classifies crypto as money.

This is important because it establishes a rule that crypto investors who come to Wyoming can count on. And it could impact the future of crypto for decades to come...

Wyoming, with less than 0.2% of the U.S. population, certainly isn't creating rules that the rest of the country is obliged to follow. But other states – and eventually the U.S. federal government – could follow its lead if its policies lead to financial success.

You see, the federal government, its agencies, and U.S. states can't agree on how to handle cryptos. Right now, four different authorities in the U.S. see cryptos different ways...

The U.S. Securities and Exchange Commission ("SEC"), which oversees securities markets, considers virtually all of the more than 2,000 cryptos on the market to be securities. It makes exceptions for the widespread bitcoin and Ethereum, though – which means more than half the market is not covered by the SEC.

Another U.S. regulator, the Commodities Futures Trading Commission ("CFTC"), controls commodity futures and derivatives transactions. It has labeled cryptos as commodities – and claims the power to regulate the industry.

Yet another regulator, the Financial Crimes Enforcement Network ("FinCen"), sets Know Your Customer ("KYC") and Anti-Money Laundering rules in the U.S. It considers cryptos and tokens a form of money. So it requires crypto companies to register with the government, collect KYC documentation on their customers, and report any suspicious financial transactions they encounter.

Lastly, the Internal Revenue Service ("IRS"), which collects taxes, has determined that cryptos are properties, not currencies. That means every time a U.S. citizen sells cryptos for a profit, he or she must pay capital gains tax on the transaction.

Put it all together, and you have four different U.S. government bodies that consider cryptos four different things – creating a tangle of regulations.

You can see why Wyoming's decision has the potential to break new ground.

Other U.S. states are regulating cryptocurrencies in their own ways. Wyoming's pro-crypto policies have attracted a wave of crypto investments... while New York's cumbersome regulation, for example, is doing the opposite.

New York began setting rules for the crypto industry before most other states had even heard of bitcoin. Its controversial "Bitlicense" – which is a business license for virtual currency activities – went into effect in August 2015.

The licensure process has cost some companies more than $100,000 in fees and legal work, and it can take three years or longer for a company to gain approval. The result? Fewer than 20 companies have gotten a Bitlicense, and several high-profile crypto companies simply choose not to do business in New York.

The U.S. regulatory landscape is a microcosm of what we're seeing around the world. Some countries have created crypto-friendly legislation, while others have chosen to over-regulate the industry – slowing the rise of crypto industries in those countries.

For example, in 2013, China first created rules around bitcoin and blockchain (the technology behind bitcoin). Today, it has a pro-blockchain/anti-crypto stance.

But as the Chinese say, you can't have both the fish and the bear's paw.

China's back-and-forth stance has created a lot of confusion and contradictions when it comes to cryptocurrencies, specifically bitcoin. While citizens can own them, they can't exchange cryptos for real money. That means they can operate crypto miners – the powerful computers that secure the bitcoin network in exchange for a reward – but they can't swap those rewards for fiat money.

Meanwhile, Japan was one of the first countries to legally recognize bitcoin as a means of payment. That has helped it become one of the world's largest crypto markets.

In short, crypto regulation can attract new investment or drive it away. By defining cryptos as money, Wyoming is looking to regulate in a way that fosters growth.

The state's rush of new economic activity has gotten the attention of lawmakers across the U.S. This should force U.S. regulators to take a hard look at the results of over-regulation – and encourage them to follow Wyoming's lead.

It's only a matter of time. And as the regulatory landscape stabilizes, U.S. crypto investors will see fantastic profits in the years ahead.

Editor's note: This is just one reason Eric believes the next crypto bull market is around the corner. Recently, he released a report on a big event that's approaching for cryptos – one that could cause a massive amount of money to flow into the space. And as it all plays out, he expects a small group of little-known cryptos could soar by hundreds, or even thousands of percent... Get the full story here.

"You won't hear about it in the mainstream media... but the cryptocurrency revolution is just getting started," Eric writes. Earlier this week, he discussed how investors, developers, and entrepreneurs are laying the groundwork for a massive shift in finance. Read more here: Three Reasons the Crypto Boom Is Just Beginning.

"Despite the over-the-top hype surrounding blockchain, I believe the prospects for bitcoin are brighter than ever," Alan Gula says. Learn more about the underlying technology behind bitcoin – and how the cryptocurrency could be poised to move higher – right here.

Today’s chart shows the value of owning an industry leader…

As longtime readers know, we like to own the best companies in their fields. These tend to be strong businesses with reliable customer bases, strong balance sheets, and steady sales. Today’s company is one of the world’s top consulting firms…

Accenture (ACN) advises management teams on broad strategy and general operations. Most notably, it also helps businesses adapt to new technologies. Its clients include more than three-quarters of the Fortune Global 500, and 97 of its top 100 customers have been with Accenture for at least 10 years. That’s a recipe for success… And it’s not wasted on this consulting giant. The company hit $10.5 billion in sales for the most recent quarter – a 5% increase over the year before.

As the chart shows, ACN shares have more than doubled over the past five years, and they recently hit fresh all-time highs. As long as important customers value Accenture’s expertise, the cash should keep flowing in… 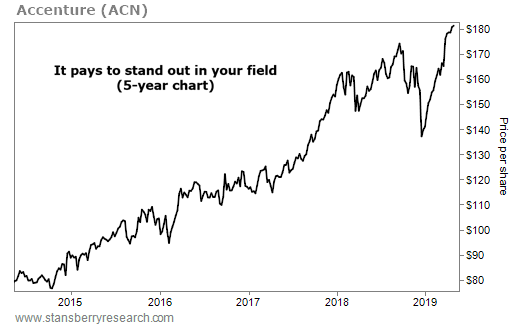