Does the Melt Up End THIS Coming October?
By Steve Sjuggerud
Tuesday, July 2, 2019

Last October, I made a crazy prediction...

I said that my just-launched "Melt Up Millionaire" portfolio in my True Wealth Systems advisory would DOUBLE before I called the end of the Melt Up.

Am I satisfied with that kind of return in such a short period of time?

After stocks delivered their greatest June performance since 1955, was that the Melt Up right there?

Is it time to pull the plug?

As I said, this October will be the one-year anniversary of this Melt Up Millionaire portfolio. And that's when I will make a major announcement about my plans for the Melt Up.

I will make this announcement at what I think is the best event of the year – our 2019 Stansberry Conference at the Aria Resort in Las Vegas.

We put together what we believe is the dream event – the event that we would want to attend ourselves if we were in your shoes. And then we invite a limited number of our most loyal readers. (It's capped at 500 folks.)

This event sells out months in advance every year.

All the "big names" from Stansberry Research will be there, of course – including Porter Stansberry and Dr. David Eifrig. But this year, the list of "outside" speakers is just as extraordinary... It includes comedian Dennis Miller, a few famous hedge-fund managers (including Whitney Tilson), political commentator Buck Sexton, and many, many more.

(No, we don't have some sort of deal with Netflix or anything like that... At our annual conference, we just want to share the most interesting people we can with you.)

I'm proud to be speaking among such an incredible crowd each year. So I try to save a big prediction that I can unveil for the first time at this conference. And of course, I will give the one-year update on my Melt Up Millionaire portfolio. (Is it time to sell everything yet?)

Again, the Stansberry Conference always sells out well in advance. Speakers are always subject to change, but we have an extraordinary conference planned for this year.

I look forward to seeing you there...

P.S. I hope you'll act soon if you haven't yet gotten your ticket for this year's Stansberry Conference. By doing so, you'll secure a special gift – $500 in Stansberry Credit that you can put toward one new subscription to any product. Don't miss out! Secure your spot here.

Read some of Steve's latest updates on his Melt Up thesis right here:

Corrections Happen... Even in the Melt Up
One More Reason the Melt Up Isn't Over Yet
What the Trade War Means for the Melt Up

Today, we’re checking in on the ups and downs of a rapidly growing restaurant chain…

Longtime readers know all about Steve’s “bad to less bad” investment strategy. You can make huge gains with cheap, hated assets as the market evens out – or as things simply get “less bad” than before. That’s exactly what’s happening with this company right now…

Shake Shack (SHAK) is one of the fastest-growing restaurant chains… In 2018, its U.S. sales totaled roughly $468 million – a 27% increase over the previous year. But concerns over slowing foot traffic – along with the sell-off in the broader market – caused SHAK shares to plummet toward the end of last year. Now, it appears that investors overreacted… In the most recent quarter, Shake Shack reported more than $132 million in sales and comparable sales growth of 3.6%. Both of these metrics crushed analysts’ estimates.

And as you can see, that’s a big reason why SHAK shares have rebounded this year. The stock is up more than 50% so far in 2019, recently breaking out to a fresh multiyear high. It’s more proof of the gains that are possible when things simply get “less bad”… 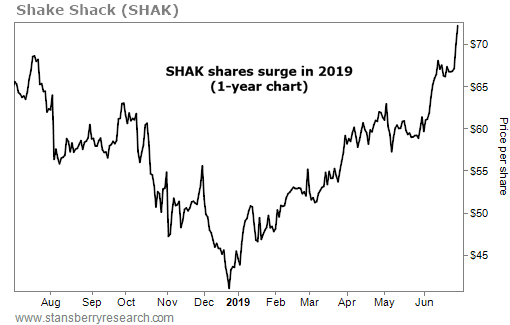