What the Trade War Means for the Melt Up
By Steve Sjuggerud
Wednesday, June 5, 2019

I've been bullish on stocks for the last decade. It was March 20, 2009, right here in DailyWealth, when I told readers a major bull market was underway.

Since then, I've stayed bullish consistently. And every time we see a crack in the armor – every time the market falls, even just a little bit – I hear questions like the ones above.

Folks want to know what I expect to happen next. They know me as "Mr. Melt Up"... And they want answers when times get tough.

Tough times are here now. The escalating trade war has had a major impact on the U.S. market. Stocks fell in a big way last month.

Folks are getting worried. But I'm not. Today, I'll explain why...

Stocks hit new all-time highs at the end of April. Then they fell throughout most of May.

We're now down around 7% from those all-time highs. And the speedy decline has folks scared. But let me repeat that last part again...

This hasn't been some major crash. And to me, it's no reason to panic. It's completely normal market action.

That's not how most folks feel, of course. No one expected the trade deal to fall apart. And sentiment in the markets reversed completely as a result.

Negative sentiment isn't a bad thing, though. In fact, it's exactly what I love to see... because prices tend to move higher when folks are scared, like they are today.

We can see how scared they are by looking the CBOE Volatility Index – known as the "VIX." It jumped 50%-plus in less than two weeks during May. And it hit a multimonth high in the process.

Clearly, investors are nervous about what's going to happen with the U.S.-China trade war. And that's true of professional investors too, according to the most recent Bank of America Merrill Lynch Global Fund Manager Survey...

This survey asks a couple hundred professional money managers what they're doing with their money, what they're worried about, and what they're excited about. It's a fantastic indicator of what the pros think. And the May edition gave more great insights into current investor fear.

The professional investors are scared. And that has caused them to hedge their portfolios at one of the highest levels we've seen since the Great Recession. Roughly a third of respondents say they've taken out protection against a sharp fall in the stock market over the next three months.

In other words, the renewed trade war has spooked mom-and-pop investors and professionals alike. No one knows what to think... or what to expect next.

That negative sentiment is powerful. But again, stocks are only 7% below all-time highs. This means we have a major opportunity... When the fear blows over, prices should reverse in a big way.

As for what happens next, my view is simple...

Trump wants to stay in power. He wants to be re-elected. And that means he'll be willing to go to the table and renegotiate.

This is why last week, I said Trump would do anything to end the trade war. I still believe that's the case. He needs to get a deal done. And a deal will be good for the health of the U.S. market, too.

So, what about the Melt Up?

Easy – the Melt Up is doing just fine.

I see the recent fall in prices as a minor pause. This is a temporary setback... nothing more. The final push of this Melt Up will be here soon. Don't miss it.

P.S. Right now, I see one catalyst in China's market that's so big, it could dwarf the trade war completely. It could start as early as this month... And I believe it will kick off a stock-buying frenzy like we haven't seen in decades. Best of all, thanks to the trade war uncertainty, we have a stellar opportunity to get in now – before this idea goes mainstream.

That's why I put together a presentation to explain the full details. I urge you to take the time to watch it and get the whole story, right here.

"Investors have been glued to the trade-war news in recent weeks," Steve says. "It has caused major uncertainty, and prices have fallen." But looking at the long term, there are plenty of tailwinds for China ahead. Learn more here.

"When the overall market hits a new high and important sectors like transportation or financials don't, it's a bad sign," Steve writes. "But some divergences can be a positive sign. And we recently saw one of those when stocks hit new all-time highs just a few weeks ago." Get the details on how this points to more upside ahead right here.

Market Notes
THIS 'BORING' BUSINESS IS SHRUGGING OFF MARKET WORRIES

Today, we’re checking in on one of the best “boring” businesses out there…

These may not be the type of investment you hear about at the water cooler or your neighbor’s cocktail parties… But what they lack in excitement, they make up for in reliability. Boring businesses typically produce steady, long-term profits. We’ve revisited today’s stock many times now – and it’s still soaring…

Waste Management (WM) is the leading garbage collector in North America. The $47 billion company provides waste-disposal services for more than 20 million customers. Hauling away the trash and recycling isn’t glamorous, but it’s a weekly necessity. And serving a large customer base is great for sales… In the first quarter, Waste Management reported revenues of $3.7 billion, up from roughly $3.5 billion in the same quarter last year.

As you can see in today’s chart, WM is still rising. The stock is up 17% since we last checked in on it in January, and shares recently hit a fresh all-time high. The “cocktail-party stocks” will come and go, but this boring business is here to stay… 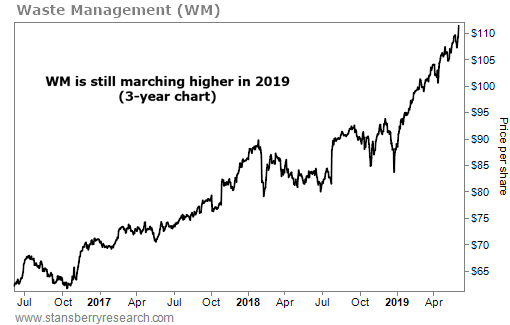