Why Trump Will Do Anything to End the Trade War
By Steve Sjuggerud
Thursday, May 30, 2019

Who has the best negotiating position in the trade war?

If you ask most Americans, they'd say Trump. But they're dead wrong...

This is typical, of course. What folks in the U.S. believe about China is usually way off-base. And as I explained last Friday, this difference between perception and reality is why I'm so excited about Chinese stocks today.

The trade war is a great example. Folks believe the U.S. has the upper hand... They believe we hold all the cards. But boy, is that a mistake.

A closer look reveals something quite different. And it tells me that Trump will do just about anything to end the trade war.

The trade war – which the world thought was coming to an end – is now back on.

Earlier this month, the U.S. and China were set to sign a major trade deal. But China backed out at the last minute. It said the terms of the deal were no longer acceptable.

The Chinese have already announced plans to retaliate with tariffs on U.S. goods in June – $60 billion worth. So it seems we're back to square one.

Of course, since the entire world thought the deal was as good as final, both the U.S. and Chinese stock markets have taken a beating.

The question everyone's asking now is, "What happens next?"

To answer that, we need to examine who's in the position of power right now. And the answer isn't what most folks believe.

Before I explain this, I urge you not to get mad at me for what I'm about to say. I'm not being un-American. It's simply the most logical answer in front of us today.

The answer is simple: He wants to maintain his perch at the top – to get re-elected.

This answer is simple, too: What he needs are the states that could go either way... basically, the farming states in the Midwest.

Yet again, this answer is simple: Punish the voters in the states that Trump needs to win the 2020 election.

Simply put, by continuing to buy fewer and fewer U.S. crops, China hits Trump where it hurts the most... votes.

This idea has major implications. Most of all, it means that as we near the election, Trump moves from a position of power to a position of weakness in trade negotiations.

Chinese President Xi Jinping has no term limit. He's in power for life, theoretically. And that means he can stomach short-term pain to win the long-term war.

That's not true for Trump. So as time goes on, Trump will likely do anything necessary to end the trade war and win the votes he needs most.

Let me be clear: We can't know how long it will take. But a resolution to these tensions seems almost certain to me. It's a necessity not just for the U.S. – but for the man calling the shots.

That's why I view the trade war as a short-term problem. And it's why I continue to be incredibly bullish on Chinese stocks in the coming years.

P.S. Not only do I expect the trade war to end soon... but I've also found the perfect way to profit when it does. And I'm sharing the idea at a free event I'm hosting TONIGHT at 8 p.m. Eastern time.

I've put together this emergency briefing to share what I learned on my latest trip to China, including the three major trends that should cause Chinese stocks to soar in the years ahead... and my favorite way to profit from a trade-war resolution.

This is the best way I know of to give you the story on China that the mainstream media isn't telling today. The event is just a few hours away... Sign up to join us online, for free, right here.

"Chinese stocks have fallen since the trade war was renewed earlier this month," Steve says. "But the markets are getting this one wrong." For another big reason that the trade war is mainly a U.S. problem, read more here.

The pressure is on for President Trump... As our colleague Justin Brill shared over the weekend, a few key trade war developments suggest that China isn't rolling over anytime soon. Get the details here.

Market Notes
THIS 'EXTRA SPACE' STOCK IS RALLYING IN 2019

Regular DailyWealth readers know we look for companies taking part in big, secular trends. And these days, the trend of “owning stuff” is in full swing… so much so that the U.S. self-storage industry has grown 3.8% annually for the past five years, reaching $37 billion in revenue last year. Today’s company is a leader in the “extra space” business…

Public Storage (PSA) is the largest self-storage company in the U.S. The $40 billion company operates nearly 2,500 storage facilities in the U.S., and it serves more than a million customers. It’s also structured as a real estate investment trust (“REIT”)… which means it pays out most of its income to shareholders. Since 2011, Public Storage has more than doubled its dividend payout, yielding nearly 3.5% today.

As you can see in today’s chart, PSA is climbing in 2019. After a sell-off last year, shares are up nearly 20% from their January low, and they recently touched a new 52-week high. As long as people refuse to toss their extra stuff, this business should continue to thrive… 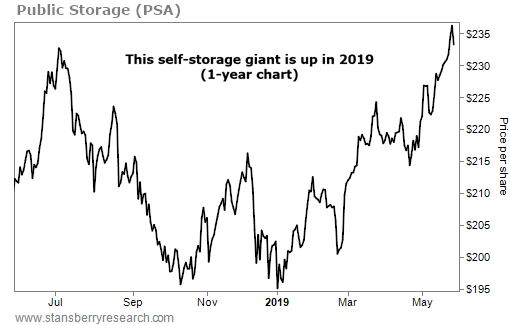