One More Reason the Melt Up Isn't Over Yet
By Steve Sjuggerud
Monday, June 17, 2019

If you thought the Melt Up was over after last month, you need to read today's message...

That's right – last month's decline was a once-in-a-generation type event. And it has a lot of folks wondering if the Melt Up is already over.

Normally, that would be the right assumption. Big declines tend to precede more big declines. But history says that's not the case with major May losses.

In fact, buying after major May declines has a perfect track record over the next year. It's led to double-digit gains, on average. And it's one more reason why the Melt Up isn't over yet.

After a major correction in December, stocks bottomed just before the start of 2019. Then, they rocketed higher in the first four months of the year.

The Melt Up was back.

The S&P 500 was up 18% for the year through the end of April. It was a one-way ride higher, hitting new all-time highs along the way.

It seemed like another easy year in the markets... Then the bottom dropped out. 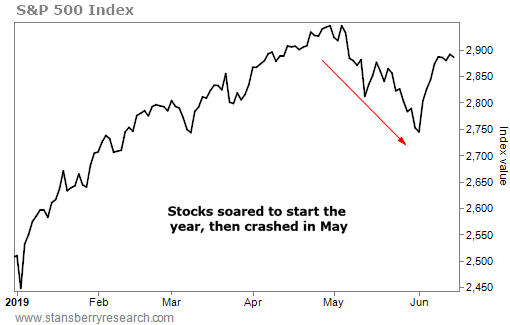 Investors were getting cozy with the stock market. And they paid the price last month. The question now is what this major monthly decline actually means...

Is this the end of the Melt Up? Is it time to pack it in and move on?

You might expect that to be the case. But history tells a different story...

To see this, I looked at every May decline of 5% or more since 1950. These kinds of falls happened eight other times. And if you'd bought in those cases, you'd have made money a year later every single time. 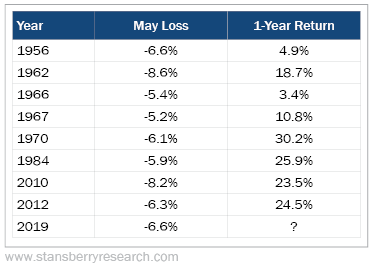 Not only did buying after major May losses make money every time, it often made big money.

The market soared 20%-plus half the time. And on average, stocks jumped 18% over the next year. That's dramatically better than the typical 8% a year the market has returned since 1950.

There are no guarantees here, of course. This could be the time this strategy doesn't work. But we have a lot of history that says stocks are a smart bet over the next year.

This already beginning to play out. Stocks have stormed back so far in June. And we're approaching new highs once again.

I see this as the Melt Up kicking back in. You don't want to miss this next wave higher. And that's why my advice remains the same... stay long.

P.S. I first introduced my Melt Up thesis in 2015 at our annual Stansberry Conference in Las Vegas. I've made a habit of sharing my newest and biggest ideas at this event... And I plan to do the same at this year's conference, which is just a few months away. The good news is, there's still time for you to sign up and join me in Las Vegas in October. For more details, click here.

"When the fear blows over, prices should reverse in a big way," Steve said last week. And so far, that's what we've seen after the recent bout of trade-war volatility. Learn more about why he expects the next leg of the Melt Up to continue right here.

Quick falls in the market can shake your confidence as an investor. But as Dr. David Eifrig explains, one simple step can help you get ahead of what the crowd is doing – and sleep well at night. Read more here.