What are you doing?

What are you waiting around for?

I've been absolutely pounding the table for you to buy Chinese stocks this year. I sure hope you've listened.

If you've stayed on the sidelines, you might think it's too late now... "Up 32% already? I missed it, Steve. I should have listened sooner."

It might be hard to believe... But no, you didn't miss it.

A 32% gain in a quarter would mean you missed it – in most other markets. Usually, that would be an absolutely stellar year's worth of returns in the stock market.

Heck, U.S. stocks only jumped 20%-plus in a calendar year three times during the current bull market.

You have to remember something, though... China isn't like other markets. It doesn't work by the same "rules."

So no, you haven't missed it. Not even close.

If you look at the chart below, you'll see why. It shows that – five separate times – Chinese stocks have delivered triple-digit percentage gains within 24 months. Take a look... 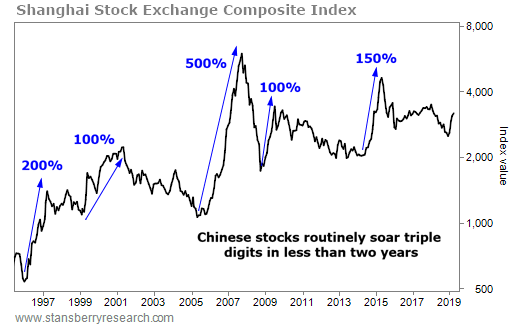 China's stock market is famous for huge booms and busts. And we're in the middle of one of those booms today.

China has been the best-performing market in the world so far this year. That makes it easy to assume the good times are already behind us. But they're not...

Look closely at the chart again. Look back around 2005.

The Shanghai Composite started that period at around 1,000 points – the same price it traded at roughly a decade prior. Then, Chinese stocks took off. Within two years – in late 2007 – the index peaked at around 6,000.

In other words, it soared sixfold. A total return of roughly 500% in less than two years... from a broad market index.

In other words, it lost half its value. Any way you look at it, China's stock market had a massive bust. You have to be aware of these kinds of busts when you invest in China.

But while this might sound scary, that momentum is what makes such huge gains possible...

You see, before that big 2015 bust, the Shanghai Composite stood at around 2,000. The entire market more than doubled in roughly one year.

The point is, when Chinese stocks get going... THEY GO. And they're going RIGHT NOW.

The Shanghai Composite is up 32% so far this year. But you haven't missed it. History says we could see triple-digit gains over a period of two years – or even less.

Stop procrastinating. It's happening now. Don't get left behind... Get on board!

P.S. If you want to learn my favorite one-click way to invest in China today, the latest issue of my True Wealth newsletter shares all the details... Learn how to sign up right here.

"The long-term opportunity in Chinese stocks is too good to pass up," Steve writes. Get the full story on a sentiment shift that could help kick off the next China boom here: A Cryptic Headline Says $2 Trillion Could Flow Into Chinese Stocks.

Today, we’re checking in on one of our favorite gauges of the economy…

Regular readers know we follow several “real-world indicators” to measure the health of the economy. When consumers are spending freely, it’s a sign that consumer confidence is high. So today, we’re looking at a company that makes money every time someone swipes a debit or credit card…

When Americans shop, financial-services giant Visa (V) benefits. Like Mastercard (MA), it issues debit and credit cards, and collects a small fee each time consumers use them. But no one can match Visa’s scale. Last year, Visa’s cards accounted for nearly $2 trillion in purchase volume… That’s more than double the nearest competitor, according to the Nilson Report. Plus, at a 10% increase over last year, it’s a sign consumers are still spending money in droves…

Visa shares are breaking out today. As you can see, the stock is up more than 30% over the past year alone, and it recently hit a new all-time high. This credit-card leader shows us the U.S. economy is still chugging along… 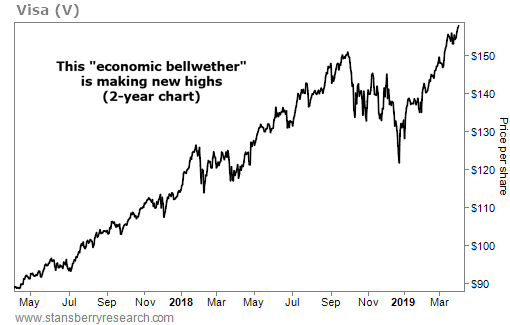