I have some huge news to share with you today...

For years, I have told my readers two things:

Now, both of these stories are taking a giant step forward. And it means the value of these companies can finally soar to its true potential.

Tencent, in short, is China's most important company. It "owns" your screen time in China...

Whether you are messaging with friends on its WeChat app, watching the NBA, playing online video games, or paying for stuff, Tencent is number one – and there is no number two. As Tencent moves toward monetizing WeChat, I believe it will become the world's largest company.

Tencent is already worth more than $400 billion today, making it the world's eighth-largest company by market value, ahead of Johnson & Johnson (JNJ) and Walmart (WMT) in ninth and 10th place.

But who owns the biggest chunk of Tencent? If you're new to my work, the answer might surprise you...

Naspers owns about $130 billion worth of Tencent stock (in addition to stakes in dozens of other tech businesses).

The thing is, Naspers has outgrown the South African stock market...

Because Naspers has gone up so much in value – largely thanks to its stake in Tencent – Naspers now makes up roughly a quarter of the value of the main South Africa stock index.

This has caused a crazy side effect: As Naspers keeps going up in price, fund managers in South Africa have to keep selling the stock so it doesn't get too much weight in their portfolios.

This has created a serious distortion...

As I write, the market value of Naspers is less than $100 billion. Keep in mind, Naspers owns a stake in Tencent worth roughly $130 billion... AND it owns dozens of other "ecosystem" tech businesses, with full-service platforms that customers never want or need to leave. Clearly, Naspers' stock is trading at a big discount.

Just yesterday, Naspers announced how it plans to solve its problem – and help make its discount go away...

In short, this move finally unlocks the value in Naspers' tech businesses, including its stake in Tencent...

Much of the discount due to the South Africa listing can finally disappear. That means NewCo's valuation won't have a ceiling anymore. And Tencent is that much closer to becoming the world's largest company.

If you followed my advice to buy into Naspers, you are in a good place... So thank you for sticking with me and buying this little-known name.

I believe NewCo shares could ultimately trade at a premium to the company's stake in Tencent. And Naspers' tech businesses are a perfect way to profit in my Melt Up scenario, if tech stocks soar the way I expect during the final innings of this bull market.

P.S. I've covered Naspers in my True Wealth advisory for years... It's where I share the contrarian investment ideas that most folks overlook completely. I'm watching this story closely – and as it unfolds, I'll follow up with more specific advice for my paid subscribers. To learn how you can sign up for True Wealth today, click here.

"Most folks in the U.S. don't want to hear this... But it's simply unwise to ignore China in the years to come," Steve writes. Right now, a shift is taking place in one corner of the Chinese market... one with big investment implications. Get the full story here.

"Solving this problem will shift up to a trillion dollars into Chinese stocks in the coming years," Steve says. Read more about another reason he's bullish on China right here: The '4-2-1 Problem' and What It Means for Investors.

Our colleague Dr. David Eifrig believes the health care industry is benefiting from a massive tailwind. According to the Population Reference Bureau, the number of Americans older than 65 will more than double by 2060. That means more people will need medical care. And today’s company is a major supplier of drugs and medicine…

Merck (MRK) is a $210 billion pharmaceutical giant. The company makes lifesaving drugs like Januvia, Keytruda, and Zetia… all of which help fight common conditions in seniors (diabetes, cancer, and high cholesterol, respectively). Merck also makes vaccines for diseases like measles, mumps, and shingles. Providing medical treatment is big business these days… In 2018, Merck reported sales of more than $42 billion, the highest since 2013.

As you can see in today’s chart, MRK shares are trending higher. The stock is up more than 50% over the past year, and it recently hit a new multiyear high. As the bull market in health care rages on, MRK should have more gains in its future… 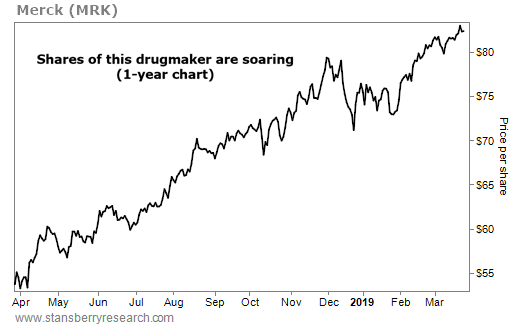