It is THE biggest problem facing the world's second-largest economy.

Fixing it will require trillions (yes, trillions) of dollars.

Here's the deal: China is about to grow old before it grows rich...

Thanks to China's "one-child policy," which lasted from 1979 to 2015, each young Chinese worker today faces supporting four grandparents and two parents as they get older.

That is the 4-2-1 Problem. And today, I'll share why solving it will shift up to a trillion dollars into Chinese stocks in the coming years.

Here are the details...

As China has changed from a poor country to the world's second-largest economy, it hasn't set aside enough money for its retirees – yet.

And even though the Chinese save money at a much higher rate than Americans, surveys show most Chinese adults still worry they won't have enough to retire.

They're right to be worried. The threat for China is dire...

According to the World Bank, pension fund assets in the U.S. are roughly 135% of GDP. In China, the number is just 1.5% of GDP. (The World Bank defines a "pension" as "any plan, fund, or scheme that provides retirement income.")

China doesn't have enough money set aside today to support future retirees. And the young people can't pick up the slack on their own...

In China, young people are supposed to look after their parents and grandparents. It's expected. (Actually, it's more than expected – for example, Shanghai recently passed a law requiring adult children to visit their parents in nursing homes.)

But the country doesn't have enough young people working to pay for the old people, thanks in part to its former "one-child policy," which lasted decades.

That's why each young Chinese worker will face supporting four grandparents and two parents in the coming years. It's the source of the 4-2-1 Problem.

The total numbers are staggering... By the year 2050, 330 million Chinese people will be over age 65. That's almost a quarter of the population.

So trillions of dollars need to be saved, starting now, to head off this problem.

Not only does China need to increase the money going into pension assets, it also needs to increase the return on those assets. It's the only way China can resolve its pension crisis quickly enough. And it needs to happen – now.

So where can you go for a higher return on your investments over the long run? The stock market...

That's exactly what China is planning to do. It has authorized one of its two main pension funds to invest up to 40% of its assets in stocks. But this fund has only invested about half that amount so far. It's a similar story with the other pension fund.

And that means huge growth potential as China races to increase its pension assets...

Research firm KPMG predicts China's two main pension funds will have more than $3 trillion in assets by 2025. If they invest just one-third of that money in the stock market, that's $1 trillion headed into stocks by 2025.

This is going to happen. It has to, for China to solve the 4-2-1 Problem. As much as $1 trillion from Chinese pension funds should head into stocks by 2025.

Of course, that kind of massive money shift will be a huge tailwind for the Chinese market. It'll create a steady stream of buyers, consistently helping to push prices higher.

This is one more major reason I'm bullish on China over the next few years. We have another trillion dollars soon headed into Chinese stocks... The smart bet is to get your money there first.

"This shift won't just change the fabric of our lives," Steve says. "It has big investment implications, too." Get the details on another massive global trend that China is leading in a surprising sector right here.

"There's a tectonic shift coming for the Chinese stock market," Steve writes. "And the ramifications are far-reaching." What's happening right now could be the biggest China story he's covered yet... and it could start the next boom in Chinese stocks. Learn more here: The 'Chinese Nasdaq' Is Set to Launch This Year.

Computer chips are just about everywhere these days. They’re in your car… in hospitals… in factories… and throughout America’s infrastructure networks. And in all of those places, you’ll find components designed and manufactured by this $40 billion semiconductor company…

Analog Devices (ADI) boasts a diverse portfolio of specialized products. It makes the pressure sensor that tells your iPhone when you’ve tapped its screen. It makes the chips in your doctor’s X-ray machines. It makes radar solutions for air-traffic control. It even makes gyroscopes for oil-drilling equipment. Little pieces like these add up… The company reported a $355 million profit in the most recent quarter, up 21% from the year before.

As computer chips exploded across all aspects of our lives, ADI shares more than doubled over the past five years… And they just hit a new all-time high. This stock should see more gains as the semiconductor trend continues… 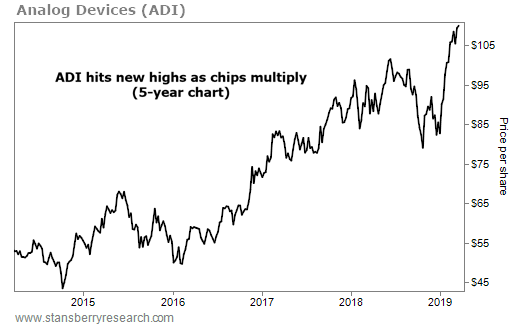