The Future of Gaming Stocks Isn't in America
By Steve Sjuggerud
Thursday, February 28, 2019

My son is a senior in high school. He is an athlete...

At age 14, he became an East Coast champion surfer. And today, he is the center midfielder on his high school soccer team – which just won the county championship for the year.

The thing is, when it's NCAA "March Madness" time, he couldn't care less about a college basketball tournament. And when the college football national championship was on last month, he barely watched...

Instead, he went downstairs to play video games online with his friends.

Let me state that again: On the night of the college football national championship, my son chose to play video games instead of watching the big game. One of the guys he was playing online with was the captain of his high school football team.

It was a not-so-subtle message that times are changing...

I grew up watching sports on TV with my dad. Generations of boys did the same thing. But that's not the case anymore. In fact, if my son is any indication (and I believe he is), the times have ALREADY changed.

This shift won't just change the fabric of our lives. It has big investment implications, too. And you might be surprised to hear this... but the winner of the transformation is not the U.S.

The Super Bowl happened just a few weeks ago. The game had the lowest viewership since 2008.

That's at least partially because the younger generation doesn't care like they used to. And if you ask kids my son's age, the "real" Super Bowl was months prior – when the League of Legends World Championship aired online...

The 2018 event broke every record in the book for viewership of a gaming event. At peak attendance, the League of Legends World Championship had 200 million concurrent viewers worldwide. That broke the 2017 record. And it was double the number of people who watched the Super Bowl this month.

These numbers get so large because gaming has a global reach. It's big in the U.S., but it's also big in other countries... And it's huge in China.

A Chinese team won the 2018 League of Legends World Championship. It was China's first victory in a gaming championship, but it likely won't be the last.

That's because in many ways, China is the global center of gaming.

Consider another of gaming's largest events – The International 2018...

The game in this event is Dota 2. Like League of Legends, it's another battle game. The 2018 championship took place in Vancouver, Canada, in August. Viewership was astounding, with an average of 4 million concurrent viewers during the event. But here's what's interesting...

A whopping 87% of those viewers were Chinese. And similarly, the Chinese accounted for 87% of total time spent watching the event.

This was such a Chinese-centric event – from a viewership perspective – that the data is broken into China and everyone else.

And in case you were wondering, the 2019 tournament will be held outside North America for the first time ever... in Shanghai.

So while my son and his friends are into gaming in a way my generation wasn't, the U.S. is still behind. China is the global hub of competitive gaming. And it has also become the hub of game publishing...

Chinese companies now own many of the hottest games in the world. Fortnite – a game that my son is addicted to – comes from a Chinese company. So does League of Legends. Both games get roughly 80 million players per month.

You can't survey the global gaming landscape without centering your sights on China. That wasn't true a decade ago. But it's the reality we live in today.

Longtime readers know I've been bullish on the Chinese markets for years. Until recently, the gaming revolution hasn't been a big part of that story... But it is now.

Most folks in the U.S. don't want to hear this... But it's simply unwise to ignore China in the years to come.

Gaming is one more massive global trend that China is leading. It's one more reason Chinese stocks could soar from here... And you need to get on board.

P.S. China is hugely important to the gaming world... But gaming is only a small idea compared to China's top investment opportunities.

I recently put together a presentation highlighting the biggest China story I see today. It's an event we haven't seen in decades... And it should mean huge upside for the right investments – including my two favorite Chinese gaming stocks. You can check it out right here.

Big changes are coming to China... And Chinese stocks – especially in technology – could see fantastic gains as a result. Catch up on Steve's two-part breakdown here and here.

"In my travels to China, I can't believe the changes I've seen in the last five to 10 years," Steve says. In November, he sat down with an insider to get some details on American perceptions of China versus the reality in China. Learn more here: The Fascinating Story of Kaiser Kuo.

Market Notes
THIS COMPANY RIDES HIGH ON A STRONG ECONOMY

Longtime readers know we use a variety of industries as economic bellwethers. When we see strong performance from airlines, ski resorts, or home-improvement companies, it’s clear that Americans have money to spend. We get a similar clue from payroll-processing companies about jobs and employment…

Paychex (PAYX) is a $27 billion firm that manages payroll and benefits services. It specializes in serving small and medium-sized businesses. When more Americans are finding work, companies invest in staff-management services to keep their numbers straight. And PAYX’s performance suggests that these companies are thriving today… In the most recent quarter, Paychex collected nearly $860 million in sales – a 7% improvement year over year. The company said it saw “solid progress” across all its major product lines.

Since we last checked on PAYX in late 2017, shares have risen nearly 20%… And they recently hit a new all-time high. It’s yet another clue that businesses are doing well and Americans are earning money… 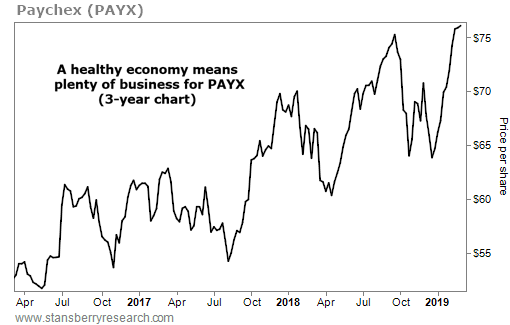