The Greatest Bubble in 30 Years Is About to Begin
By Steve Sjuggerud
Tuesday, February 26, 2019

The Chinese markets are massive. But they're also behind the times... full of wrongs to be righted.

As I explained in yesterday's DailyWealth essay, a big one is getting solved this year. It's hard to even believe what's happening in China right now. Imagine this...

If Facebook were a Chinese company that had tried to go public in China, it would have been rejected. Amazon, too.

In fact, just about every U.S. tech company that got its start in the 1990s would have never been given a chance.

Today, 80% of all U.S. initial public offerings ("IPOs") would be banned under China's current system. It's an incredible wrong in China's stock market... But it's about to get righted.

China has announced plans to open a new stock exchange this year, specifically for its fast-growing tech companies.

This change should kick off a firestorm of activity. But even more important, I believe it could lead to the largest bubble since the dot-com craze of the late '90s.

Let's take a closer look at what's possible in China, based on what we've seen in the past...

Yesterday, I told you how the early Internet company Netscape changed the course of initial public offerings ("IPOs") in the U.S. The company went public without profits... something that hadn't been done before... and was a massive success.

That changed the game for companies going public in America. And I believe it's about to happen again... in China.

You see, Netscape's success on the Nasdaq was one example of what can happen with companies without profits are allowed to go public.

But it also helped pave the way for an absolute frenzy. It created the perfect environment for young tech businesses in the '90s...

These companies wanted to grow. But they needed cash to get going. They didn't have a chance of making profits otherwise. Normally, they'd be kept out of the public markets – but the Nasdaq let them in. And with Netscape, everyone got a taste of the kind of money you could make on a blockbuster IPO.

The excitement kicked off one of the most dramatic bubbles in history. The Nasdaq Composite Index soared hundreds of percent in just a few short years.

Of course, plenty of carnage followed the bubble. But the frenzy was able to happen because of the change that Netscape and the Nasdaq exchange made possible.

China is perfectly positioned for this kind of explosive boom...

According to my sources, its new exchange could receive as many as 1,000 applications from companies ready to go public with looser restrictions.

That's 1,000 up-and-coming Chinese tech companies that need money... money they'll likely get beginning in 2019... money that will fuel the next wave of Chinese technological innovation.

This is not a speculation at all. The train is in motion. It's not a matter of if – just when. And right now, it looks like the "Chinese Nasdaq" is just a few months away.

Remember, as I told you yesterday...

Insiders are placing the launch as early as June, with reviews of IPO applicants starting as early as March. We don't have many details just yet. But we should see rules for the new exchange in the next few weeks.

That means in less than a year, Chinese citizens will be able to pour money into exciting Chinese tech startups.

This could ignite China's own version of the dot-com bubble... as eager investors get a chance to buy into small Chinese tech firms for the first time.

I believe it could be the greatest bubble we've seen in 30 years.

Again, Netscape's IPO was one of the catalysts for the U.S. tech bubble. Now, Chinese companies will have the ability to go public in China with fewer requirements. And if just a few of these companies succeed, it could take the market by storm.

We could soon hear stories of paper millionaires in China... and folks quitting their day jobs to trade Chinese tech stocks. We could see the dot-com bubble all over again... on the other side of the world!

I can't stress how big this really is. It's an absolutely huge story that almost no one is covering. And it will likely mean huge upside in Chinese stocks.

P.S. For more details on why I expect this one change could kick off the biggest bubble we've seen in three decades, check out my latest presentation. I'll even explain how you can learn the names of the 11 stocks I believe will soar the most... including one fast-growing tech stock you should own right now. Take a look right here.

Investors can make a lot of money from "wrongs that need to be righted." Yesterday, Steve discussed why the "Chinese Nasdaq" will fix a major problem in China... starting this year. Read more here.

"I have never seen such a massive gap between perception and reality as I see in China today," Steve writes. Most Americans have no idea how rapidly China is growing... And for us as investors, that spells opportunity. Learn more here.

E-commerce has changed the way consumers shop, thanks to unprecedented convenience. Online sellers are doing well… But so are the companies supporting the e-commerce trend with tools and services. Today’s company is a perfect example of a leading “picks and shovels” business…

Shopify (SHOP) is a $20 billion e-commerce platform. It helps businesses process online orders, manage inventory, and more. More than 500,000 merchants use it – even big names like beer brand Budweiser and chocolatier Nestlé. And serving many online sellers is paying off… The company surpassed $1 billion in sales last year, jumping 59% from 2017. In fact, no other software as a service (“SaaS”) company has reached the billion-dollar milestone at a quicker rate than Shopify.

As you can see in today’s chart, shares of SHOP have been on a tear recently. The stock has more than tripled over the past two years, and it just hit a fresh all-time high. Supporting a booming sector is a recipe for big gains, with less risk… 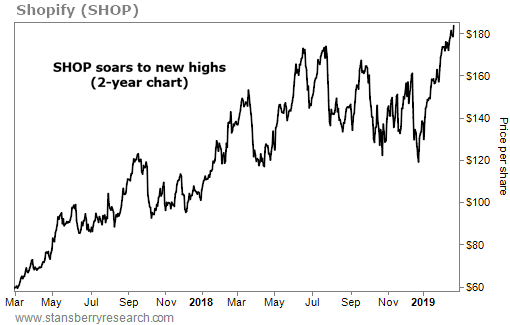