The Housing Boom Isn't Over Yet
By Steve Sjuggerud
Thursday, February 14, 2019

You make the most money in opportunities where perception differs from reality.

We have that situation in the U.S. housing market today.

Last year delivered a near-perfect storm of events to scare folks about the future of the property market...

Home prices soared again in 2018. It was the seventh straight year of gains based on the Case-Shiller 20-City Composite Home Price Index. Interest rates rose as well, which caused mortgage rates to jump... And that really spooked investors.

Rising rates, combined with higher home prices, put the affordability of homes further out of reach...

That's the narrative, at least. That's the perception folks have right now. But the reality is much different. Housing is healthier than almost anyone believes.

Longtime readers know I've been one of the biggest bulls in recent years for U.S. housing.

I've even put the largest part of my net worth into local Florida housing in recent years. And while housing isn't the generational opportunity is was a few years back, the bull market isn't dead yet.

That pessimism is the leading perception in the market today. Everyone's waiting for the bottom to fall out. And yes, some data points look scary for housing...

New home sales have been falling for a little more than a year. Interest rates have been rising, too. And that, combined with higher home prices, makes it seem like nobody wants to buy houses right now.

Those factors have pushed investors into a negative perception of housing. But if we step back and look at more data, we start to see a different picture.

The housing market has plenty of runway left.

One of the biggest reasons why is affordability. Right now, folks think this measure is saying the housing boom is over... but they're dead wrong.

Affordability looks at a few figures (home prices, interest rates, and incomes) to determine if average folks can afford a home or not.

When home prices and interest rates rise – like they have in recent years – affordability falls. And if affordability gets too low, folks simply can't afford to buy. That's an obvious sign of a housing slowdown.

Folks believe affordability will kill housing because rising prices and rising interest rates have caused affordability to fall in recent years. But today's situation isn't nearly as dire as you might expect.

The chart below shows housing affordability over the last few decades. Today, housing isn't as affordable as it was in recent years, but it's far from out of reach. Take a look... 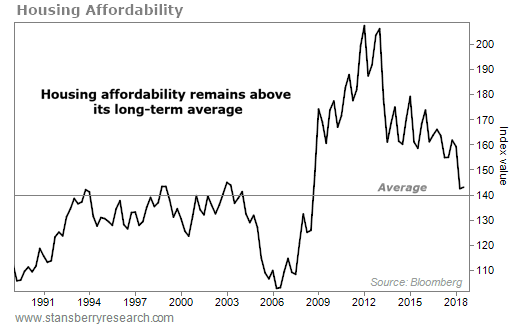 This chart distills the factors that go into affordability into one simple number. A reading of 100 means a typical person can afford a typical house in the U.S. A reading of 150 means he could afford 150% of the typical home price. So higher is better.

Historically, housing affordability has averaged a reading of around 140. And despite a dramatic decline in affordability in recent years, current levels remain above long-term averages.

The typical person can afford 143% of the typical home price today. That's not as good as it was a few years ago. But it's foolish to think higher prices and higher interest rates have made housing unaffordable in America.

This means two things: Home prices can still rise from here... And that's possible even if interest rates continue to rise. Neither possibility is the death knell for the housing boom.

This goes against the overall perception of housing today. But you make the biggest gains in opportunities where perception differs from reality.

That's the case with the housing market right now... And it's why I continue to be fantastically bullish on housing today.

P.S. Last night, I appeared with my dear friend Dr. Richard Smith to discuss why I believe the bull market in stocks still has spectacular upside from here... what you should do with your money right now... and how to prepare for the inevitable crash. If you missed the event, you can watch a replay right here.

How has the trade war with China affected the U.S. housing market? And what can it tell us about housing prices going forward? Get the details from Steve right here: 'You Bet' Tariffs Affected Our Housing Market.

Recently, Dr. David Eifrig looked at a different measure of affordability. It's a key part of planning where you spend your retirement. So make sure you're thinking about this important set of costs... Learn more here: Will You Ruin Your Retirement Paradise?

Today’s chart shows the power of owning an industry leader…

Starbucks (SBUX) is the World Dominator of coffeehouses. It has nearly 30,000 locations worldwide, of which more than 500 opened in the most recent quarter. New stores helped the company hit $6.6 billion in revenue for the period, a 9% increase… But even existing locations saw their sales rise 4%. So even as Starbucks finds new markets for its mochas, lattes, and Frappuccinos, existing customers around the world are coming back for more…

As you can see, SBUX shares recently soared to a new all-time high. Extreme Value subscribers who followed Dan’s advice to “buy the dip” over the summer are up 36% so far. Congratulations to Dan for recognizing this World Dominator’s potential… 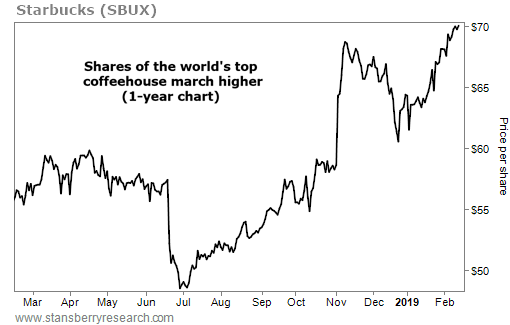