China's "New Nasdaq" stock exchange started trading on Monday... And the average stock on this exchange soared by 140% – on day one.

I may have been the first person to really pound the table about the huge upside potential here...

"The Chinese Nasdaq Is Set to Launch in 2019" was the headline and lead story in my True Wealth Opportunities: China letter in late 2018. I have talked about my ideas on this to investors while giving speeches around the globe, from Beijing to a private conference at the New York Stock Exchange.

Importantly, though, I believe this is just the beginning.

Here is an excerpt from exactly what I wrote in late 2018 in True Wealth Opportunities: China...

In less than a year, Chinese citizens will be able to pour money into exciting Chinese tech startups.

This could ignite a tremendous bubble... a dot-com bubble of sorts, but in China.

Again, Netscape's IPO was one of the catalysts for the U.S. tech bubble. Now, Chinese companies will have the ability to go public with much fewer requirements. If just a few of these companies succeed, it could take the market by storm.

We could soon hear stories of paper millionaires in China... and folks quitting their day jobs to trade Chinese tech stocks. We could see the dot-com bubble all over again... on the other side of the world!

I can't stress how big this really is. I believe it could be the catalyst to get [all] Chinese stocks moving in the right direction.

I stand by all those words today.

Let me share a couple details about what just happened...

China's Star Market – the official name for the Nasdaq-like stock exchange – started trading on Monday. It launched with just 25 stocks.

Unlike the main stock exchanges in China, which have strict 10% up or down trading maximums during a typical trading day, there were no such caps in place on the Star Market during the first five days of trading. After that, the daily band is set at 20%.

Reuters reports that 16 of the exchange's first 25 stocks more than doubled their initial public offering prices.

The best-performing stock – Anji Microelectronics Technology – was up more than 500% at one point during the day. And it ultimately closed the day up more than 400%.

China's goal with the new Star Market is that it should act something like the Nasdaq in the U.S.

Specifically, the Star Market allows Chinese tech and biotech companies that aren't yet profitable to be able to trade in China – as opposed to being forced to list either in New York or Hong Kong. Many more listings are coming.

I don't think anyone else on earth wrote about China's upcoming "New Nasdaq" in 2018 as optimistically as I did. Day one proved my predictions right, so far at least.

How do we take advantage of this? Is there even any way to participate? Or heck, after such big gains, did we miss it already?

The next issue of my True Wealth Opportunities: China letter comes out later this week. And I will share exactly what we should do.

This is one instance where I can't share what to do here in DailyWealth. It wouldn't be fair to my customers who have paid for my best China advice.

To share a bit, though... this story that nobody was writing about in 2018 is playing out as I said it would. And we are much closer to the beginning of the China tech-stock story than the end. I am certain of that...

P.S. To join me in my True Wealth Opportunities: China letter – and find out exactly how to maximize your profits in Chinese tech stocks in my issue later this week – click here.

"What's happening right now could be the biggest China story I've covered yet," Steve says. Learn more about China's new tech-focused stock exchange – and how it could lead to spectacular gains for investors – in his two-part series here and here.

"China has a history of soaring hundreds of percent quickly," Steve writes. And we expect this to happen again... Find out why more than a trillion dollars could flow into Chinese stocks over the next decade right here.

Market Notes
A GREAT WAY TO BENEFIT AS GOLD SOARS, WITH LESS RISK

Today, we’re looking at a company that thrives when gold is rising…

Regular readers know we’re fans of royalty companies in the mining space. These companies avoid the high costs of exploring or operating mines. Instead, they help fund the early stages of projects and collect royalty checks on the production. Today’s company is one of the best in this business…

Royal Gold (RGLD) holds royalties on almost 200 mines in some of the world’s highest-quality gold regions. When gold prices rise, like they are right now, Royal Gold earns bigger royalty payments… And it doesn’t have to shell out any more cash. That’s why this business model is a great way to take advantage of rising gold prices, with fewer risks.

Since gold began surging higher in early May, Royal Gold’s stock has surged roughly 45%, while gold is up a little more than 12%. Plus, RGLD recently hit a fresh all-time high. It’s another reminder why we’re big fans of the royalty business model… 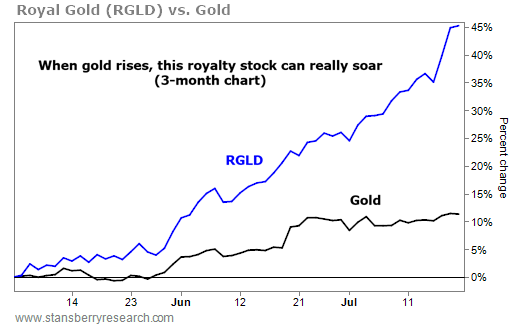