"You want to own stocks, right now."

I wrote that in bold letters back in March 2009 – right here in DailyWealth.

Let me take you back, briefly...

We'll go back to that specific moment in time. And then we'll look at where we stand in the markets today...

Investment bank Lehman Brothers had gone bankrupt, taking insurance giant AIG with it. The financial world was worrying which domino was going to tumble next. Heck, even the best pros wondered if our banking system would even survive.

We were in the midst of the Great Recession. The major stock market indexes had been slashed to half the value of their October 2007 peaks.

Asset prices are cheapest when there's "blood in the streets" – as the old saying goes. Whenever panic and uncertainty reach a fever pitch, asset prices fall, and keep falling.

It's now been 10 years since the stock market bottomed, and we haven't seen an official "bear market" in all that time. Ten years is a long time for a stock market boom. No question.

Perhaps even more interesting – and less talked about – is the fact that it's been 10 years since we've even had a recession.

It's hard to believe what I'm about to say is true, but it is: My teenage kids don't even know what a recession looks like.

The law of averages has to come into play here soon, right?

The longest expansion in American history can't go on any longer, can it?

Looking at the average lifespan of a stock boom or an economic expansion is not a particularly useful yardstick for how much longer these booms can run. There is no expiration date... They do not "just stop."

Instead, you have to simply assess where you are at that moment in time.

Right now, we are certainly not at the beginning of the boom – where asset prices are cheap and people are fearful, clutching their cash.

However, we are certainly not at the end of the boom, either...

At the end of a boom, people believe we'll never see a rainy day again. They throw all their money at investments because they believe they can't lose. Even worse, they start to borrow money to throw at those investments, too.

We are not seeing this behavior in a big way in today's stock market... yet. But we will. It's coming.

My suggestion to you is to be bold. Asset prices could very well soar as we go into the final stages of this great bull market.

A recession and a bear market are a certainty – someday. But that day is not arriving soon – 10 years in or not.

Take advantage of this moment in time for what it is... a chance to make huge profits as the Melt Up continues.

P.S. My friend, I'm serious... You most likely won't see another great bull market like this one for another 20, possibly 30 years. That's why I've gone on record to explain this huge opportunity in depth – including how you can learn some of my favorite ways to profit. Click here for the details.

"Stocks have soared 20% in a little more than two months," Brett writes. "And while that major rally has helped ease investor concerns, folks are still scared." Learn what that fear means for stocks in the months ahead right here.

"Negative news stories have dominated over the last few months," Steve says. "But one of my favorite indicators says the recent rally is healthy." Get the full details here: This 'Early Warning' Indicator Says the Rally Has Legs.

Market Notes
THE 'PICKS AND SHOVELS' OF CELLPHONE PROVIDERS

Today, we look at a company you probably use without knowing it…

Many of the world’s most famous companies rely on lesser-known businesses to make their products and services possible. These “picks and shovels” businesses can be great investments. It’s like selling mining tools during a gold rush: As long as plenty of folks are digging, you’ll succeed no matter who hits pay dirt. Similarly, unless people stop using cellphones, today’s company is likely to keep making sales…

As the chart shows, the market recognizes AMT’s value. Shares are up more than 25% over the past year and recently hit a new all-time high. Whichever cellphone provider you choose, American Tower’s progress should continue… 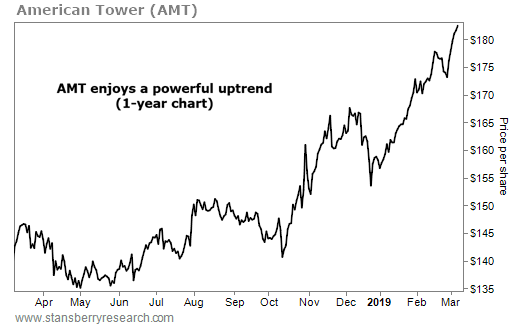