Every seasoned investor knows it...

You can't rely on the talking heads to make your investment decisions. You can't trust the headlines.

Negative news stories have dominated over the last few months. But despite the bad coverage, U.S. stocks had their best January in 30 years. February was stellar as well. And now, stocks are up double digits in 2019.

Yet even that big move has a lot of folks worried. They think it's too much, too fast.

But one of my favorite indicators says the recent rally is healthy. And that means more gains are likely from here.

I've spent the last couple years closely tracking a handful of important indicators. They've become my go-to source for the health of the market.

That's because they have a history of flashing early warning signals before the market peaks. And if they begin signaling this time around, we'll know the end is near.

These indicators were signaling minor concern at the end of last year. But that's ending right now. One of these indicators has even broken out to a new all-time high in recent weeks...

This measure is cumulative. So if 100 more stocks rise than fall today, you add 100 to the rolling total.

I use this particular indicator to tell when a great bull market is still full of energy, or when it's starting to wear out... when the crowd is getting tired of the stock market.

When the band is approaching its peak, all the seats in the arena are full. The band starts raising ticket prices. But when the band is past its peak, you start to see a lot more empty seats.

A similar sort of thing happens as you approach stock market peaks...

That is an early warning sign... That's when you know the band is getting past its prime. Prices may stay high for a while, but you can tell the market is closer to "on the way down" than "on the way up."

That's what happened before the peak in 2000, at the end of the dot-com boom. You can see it plain as day in the chart below... 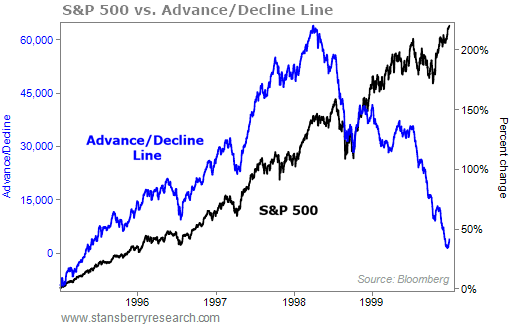 The advance/decline line began to fall in 1998. But the overall market, propelled by just a few big stocks, pushed higher.

That was a major warning sign. But it's NOT happening right now. 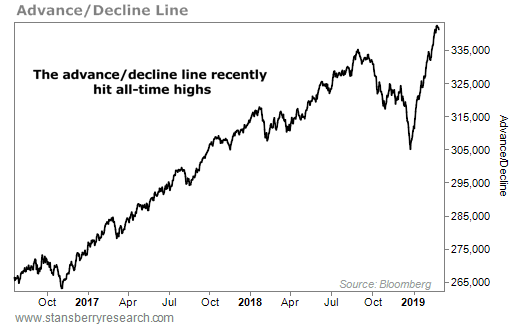 Stocks have been soaring. They're up double digits in 2019. And this chart shows the rally is broad, too. It's not just a few companies pulling the S&P 500 higher... Lots and lots of companies are rallying.

This is a hugely positive sign for the strength of the bull market. And it could mean much higher stock prices from here.

So I urge you, don't get caught up in the daily headlines about doom and gloom. It's a recipe for disaster. Instead, focus on the facts...

The facts are that the market is healthier now than it has been in months. The "rock 'n' roll tour" isn't over yet.

This new all-time high in the advance/decline line shows the recent rally is broad... And that means we want to stay long stocks.

"With the Melt Up underway, we could see explosive gains from here," Steve says. Read more about a simple way to profit during the Melt Up – even if the road upward gets rocky – right here: Don't Think... Just Own This in the 'Melt Up'.

Investors are still spooked today. And that means stocks can go much higher from here. That's why Steve recently made a big move with his own money... Get the details here: 'Mr. X' Sees Extreme Fear... and Extreme Opportunity.