How to Make a Killing During the Coming Gold Rally
By E.B. Tucker
Wednesday, February 27, 2019

Steve's note: As you know, I expect gold to go much higher from here. Today, E.B. Tucker of Casey Research explains one of the highest-upside ways to profit during a gold boom... Plus, read on for details about his big event tonight – where he'll reveal how you could make 10 times your money this year...

I believe gold prices are headed higher in 2019.

Today, I want to show you an easy way to take advantage of this trend, with even more dramatic upside...

Gold stocks aren't much different than any other type of stock. They just happen to be shares of companies that produce gold.

These companies mine the ore that contains the metal and sell it to refineries. The process is similar to producing oil or any other natural resource in the ground. It sounds straightforward.

Yet gold stocks perform better than gold for one simple reason: They offer leverage to the price of gold.

And the returns can be spectacular.

The word "leverage" usually means borrowing. That's not the case at all in the gold market.

If you aren't familiar with the concept of leverage in gold stocks, here's a quick example of how powerful it can be...

That's the power of leverage in the gold market. A small increase in the price of gold can cause a gold stock to soar many times that amount.

During a gold boom, this effect can lead to even more spectacular gains. It's happened before...

These are not hypothetical returns. They are real moves in some of the best-performing gold stocks during those periods.

Gold more than tripled during this period. But gold stocks did even better.

This group of gold producers more than quadrupled on average. And while many of these specific stocks no longer trade on the markets, the results from this period still speak for themselves. Take a look... 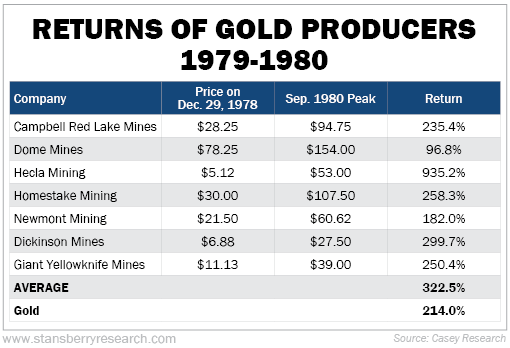 From 1981-1983, the gold producers returned more than 70% on average. And this happened in less than two years. This wasn't the only time gold stocks soared...

Another rally kicked off in the 1990s. The average gold producer went up more than 200%...

All while gold only rose 8%.

As you can see, an increase in the price of gold (even a small one) can lead to huge returns.

Today, gold is on the rise again... And sure enough, gold stocks are up even more.

From September 2018 through the end of January, gold has risen 12%.

Meanwhile, the VanEck Vectors Gold Miners Fund (GDX) – a fund that invests in a basket of gold mining stocks – is up 30%.

As gold prices rise, the best gold stocks stand to continue to soar much higher.

If you haven't yet, consider adding gold stocks to your portfolio. Just remember, gold stocks are extremely volatile. As always, never bet more money than you can afford to lose.

Like in any industry, the stocks of stronger companies will go up more than those of the weaker ones. But owning shares of GDX is a great one-click way to get started, since it owns all the major names and is easy to trade.

It only takes a small stake in the right companies to make a fortune as gold prices rise... Position yourself to take advantage of it.

Editor's note: Tonight at 8 p.m. Eastern time, E.B. will reveal a unique way to profit as the gold boom plays out... by getting your hands on "premium shares" of fast-moving gold companies. Thanks to this little-known type of security, he says you could make 1,000%-plus gains in 2019... To learn more, tune in for the free event this evening by clicking here.

"Gold has been moving higher despite a strong rally in the U.S. dollar," Justin Brill writes. "This is unusual... So seeing gold rally in spite of this headwind suggests this rally could have legs." Get the full details on why the move higher could continue here: This Could Explain Why Gold Is Suddenly Soaring Again.

"Gold gets the glory," Brett Eversole says. "But does gold deserve this top spot? More specifically, does it deserve it right now?" While gold is primed for big gains, another metal could be poised to perform even better... Learn more here: Another Reason to Love Precious Metals in 2019.

Market Notes
THE ADVANTAGES OF 'THE WORLD'S BEST BUSINESS'

Today, we’re reviewing one of our favorite investing strategies…

Stansberry Research founder Porter Stansberry has long called insurance the only investment he hopes his kids ever make… These businesses collect premiums up front from customers. Ideally, they pay out less money later in claims. Plus, the insurer can invest the money it holds in between (called “float”) and keep the gains. Today’s company is a perfect example…

W.R. Berkley (WRB) is a $10 billion insurance giant. It provides property & casualty insurance to customers in more than 60 countries. Consistently growing book value and return on float is key to succeeding as an insurer… In 2018, WRB grew its book value per share by nearly 5%. And it earned almost $700 million in investment income on its float. That’s just what we want to see…

As you can see in today’s chart, WRB shares are grinding higher. The stock is up 60% over the past three years and recently hit a new all-time high. It’s more proof that insurance is “the world’s best business”… 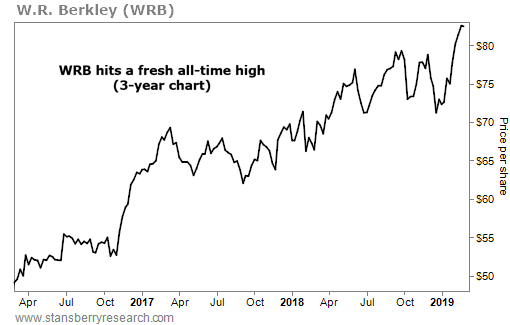