It took the better part of the year, but it's finally happened.

Last month, stocks broke out to new all-time highs. The bull market is officially back on track.

What's next though? Is the market still healthy? Will these new highs lead to more gains... or an impending collapse?

Back in May, my colleague Steve Sjuggerud shared two indicators to watch in the months ahead. Specifically, we wanted to watch them as stocks broke out (like they just did).

That's because these are our early warning indicators. We want to watch them when the overall market is going up... They'll tell us when a market peak is on the way.

Let's see what they're saying today...

Good news. Not only are stocks breaking out... but the boom is healthy.

We've got "green lights" from most of our early warning indicators.

As Steve explained in May, we've been tracking a total of five early warning indicators for the market. These indicators have a history of flashing "sell" when the overall market is near a peak.

Now, these aren't "stop what you're doing and sell" indicators. Instead, they tend to warn us of a coming collapse far in advance. If the market is going up, but these indicators turn down, it's a bad sign.

Fortunately, our early warning indicators say we're in good shape today. They say the market is healthy, and more gains are possible.

To show you what I mean, let's take another look at the two early warning indicators we've been checking on here in DailyWealth. We'll start with small-cap stocks...

Small-cap stocks give us a deeper look into what's happening in the market. If the overall market is soaring but small caps aren't, that's cause for concern. It means only the biggest companies are succeeding... which means the boom could be ripe for collapse. 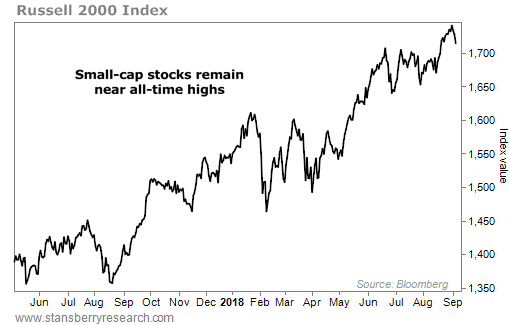 This is great to see. It means it's not just the largest stocks pushing the overall market higher... Even small companies are booming.

We can see this another way as well, using our other indicator...

This one looks at the entire market and shows how many stocks are moving higher versus how many are moving lower. It's called the advance/decline line.

Today, we're seeing a lot of stocks climbing. The advance/decline line has been hitting new highs, just like small-cap stocks. Take a look... 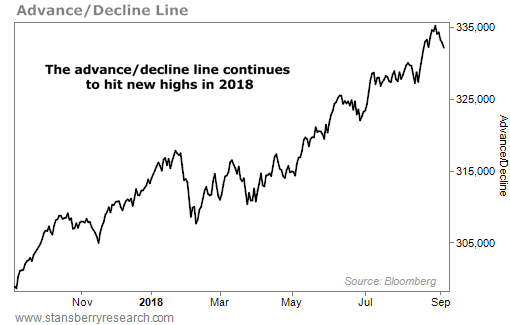 Again, a rising advance/decline line means the boom is broad... Lots of companies are moving up.

We'd be worried if that wasn't the case. If the S&P 500 Index broke out to new highs on the backs of Apple (AAPL) and Amazon (AMZN), but most other stocks were falling, it'd be a dangerous sign. But again, that's not happening right now.

When you consider that fact, it's hard not to be excited...

Stocks are healthy. They've just hit new all-time highs for the first time in months. And the boom is happening broadly, across all parts of the market.

That tells me the good times aren't over yet. We should see higher highs from here. And that makes now a fantastic time to own stocks. Stay long.

"With the Melt Up underway, we could see explosive gains from here," Steve writes. He reveals which group of stocks you want to own in the last phase of this bull market – including one simple way to invest today – right here: Don't Think... Just Own This in the 'Melt Up.'

"You need to watch one simple number if you want to know when this bull market will end," Steve explains. This indicator has flashed before every major peak going back 40 years. Learn what it's saying now, and what it means for our strategy in the "Melt Up," right here.