When will the next bear market begin?

That's the question everyone's asking. And today, I'll answer it.

But I will give you the latest update on my "bear market predictor."

Right now, this indicator is dangerously close to issuing a major warning for the market. Today, I'll tell you what that means for my "" thesis, and how we plan to invest from here.

You need to watch one simple number if you want to know when this bull market will end.

You don't need to focus on economic data... or the news headlines... or what's coming out of the White House. This number is what really matters.

If you want to know when this bull market will end, all you need to watch are interest rates. Specifically, the "spread" between long-term and short-term interest rates.

I say this because this spread has correctly identified every major stock market peak of the past 40 years. When the spread falls below zero, look out. Tough times are ahead.

We gave you an update on this indicator last month. You can see we're still close to "danger" today. Take a look at the chart below... 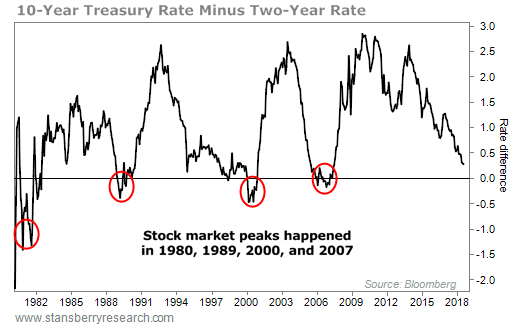 A fall below 0% has been a major warning sign for a coming bear market. And if you look at the far right of the chart, you'll see that spread has crashed in recent months.

We're now darn close to going negative. That's a bad sign for the long term. It means the countdown to the bull market peak could be upon us soon.

I don't want you to worry too much, though. You see, the spread tends to go negative with plenty of warning before the stock market peaks.

So when will the bear market begin?

Once the line hits zero, this indicator gives us between six and 18 months before the bust starts. In fact, the last three times the line has hit zero, it took 18 months for the stock market to peak.

That fits in perfectly with my Melt Up thesis...

I believe the is officially here. This is the boom I've been waiting for. And this phase should last 12 to 18 months.

The biggest gains in a bull market tend to happen during the phase. We want to be invested while it lasts.

Along the way, the spread will go negative, warning us of the coming bust. I'll become more cautious when that happens... watching closely and selling at the first sign of trouble.

We're not there yet. So while this "bear market predictor" is nearing a major signal, my advice remains the same.

The Melt Up is here... Stay long stocks.

"Right now, my computers are getting more bullish on U.S. stocks," Steve writes. Yet investors are still scared to get on board. Learn more about why the numbers say now is a great time to buy, right here: Stop Worrying... You Want to Own Stocks Now.

"With the underway, we could see explosive gains from here," Steve says. Recently, he revealed one way to invest for big potential upside – plus, a simple way to know when to stay in and when to get out. Read more here: Don't Think... Just Own This in the '.'

Market Notes
THIS COMPANY IS PROFITING FROM AMERICA'S FITNESS CRAZE

Today, we revisit a business that’s capitalizing on America’s quest for wellness…

The U.S. is making health a priority. Fewer people are smoking… Trans fats are officially banned… And today, more than 57 million Americans belong to a fitness club or gym – helping the fitness industry grow into a $28 billion market. Unsurprisingly, one of the largest franchises in fitness is still finding room to expand…

We’re talking about Planet Fitness (PLNT). With affordable memberships and more than 1,500 locations across the country, Planet Fitness makes it easier for the average American to get in a good workout. This year, the company opened 44 new gyms in the second quarter alone… growing memberships by 16% to more than 12 million members. In the same quarter, sales jumped to more than $140 million, up 31% year over year.

As you can see, Planet Fitness’ stock has soared. Over the past year, the stock has skyrocketed about 115%, recently hitting a new 52-week high. As more Americans seek out a healthier lifestyle, this low-cost fitness club should keep raking in memberships… 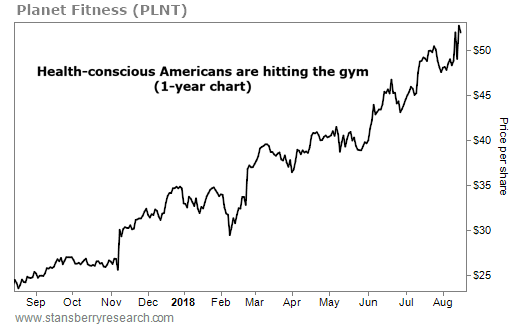