President Xi Jinping said it would be done by 2020. Now, I see it happening firsthand...

A few days ago, I took a ride with Steve on China's bullet train, traveling for our Asia Investment Opportunities Conference. We rode from Beijing to Shanghai.

That's 754 miles. And we covered it in a little less than five hours.

In the U.S., nothing compares. China's in the future. And we're playing catch-up.

Zipping through the countryside, though, you might not realize it. Little villages sped by, subsisting on agriculture. It's the view of China that most Americans expect... Out there, you get a glimpse of the country's working poor.

But next to each village, we saw something odd...

The typical view was interrupted by new construction. Not just once, but nearly every time.

We'd pass a little village. And right next to it would be clusters of cranes – each one working on a massive building.

China is literally lifting its citizens out of the dirt and up into the sky. And the growth has been incredibly rapid...

China's economic reforms started in the 1990s. Since then, it has lifted some 800 million people out of poverty.

Now, the push is to get the last 30 million above the threshold. In a speech late last year, President Xi said that ending poverty by 2020 is one of his top goals.

You can see the progress in the economic data. Just look at China's growth in per-capita gross domestic product (GDP)... 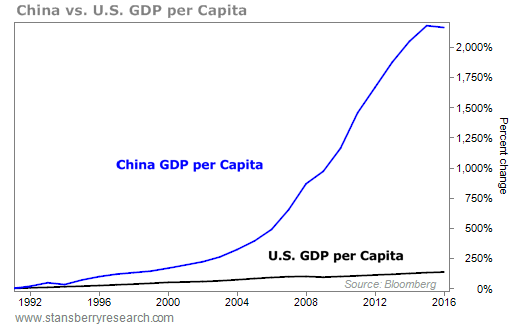 China is getting wealthier. And it's happening in a short period of time.

You can see the rise in prosperity through the construction in the countryside... and the upscale commerce of the city centers.

Yet most Americans don't see the opportunity. They still see the old China... the China of 30-plus years ago.

As a result, almost no one is talking about the major change that's taking place in China's stock market...

Regular readers have already heard the first part of the story from Steve. In short, China is finally joining the world's major emerging markets index. That means institutional investors will be forced to pour hundreds of billions of dollars into the local Chinese stock market – likely over the next five years or so.

It's going to happen. As of May 31, one inclusion has already taken place... And it's the first of many.

We believe this transition alone will create the greatest bull market in China investors have ever seen. But it doesn't stop there.

Steve – my mentor and friend – has found another trillion dollars that's ready to flow into China's stock market. And he recently wrote about it in his True Wealth China Opportunities newsletter.

This will be another massive influx of institutional money. And it will reshape China's stock market.

Today, we have the opportunity to get our money there first. We can beat the institutional investors to the punch – and make incredible returns as the money pours in.

Below, you'll find an offer to join us in taking advantage of this amazing opportunity. I hope you will.

Editor's note: Steve just detailed how $1 trillion is about to flow into China's stock market in his latest issue of True Wealth China Opportunities. He explains exactly which stocks are best positioned to profit from this flow of cash. And right now, you can get in on Steve's exclusive China research with a special offer... Click here to learn more. (This link does not lead to a long promotional video.)

"It's ridiculous that it took this long for China's locally traded stocks to be included in the world indexes," Steve writes. "For investors like you and me, it's a once-in-a-lifetime event." Catch up on the latest developments with this story right here: On the Ground in Beijing: The Big News.

"The common American view that China's prosperity is a big front put on by the Communist government just doesn't hold up," Ben Morris says. Check out some of his first impressions from Steve's China trip right here: I Came Without Expectations... Now I Have Some.

Today, we re-examine how “boring” businesses can bring stellar gains to your portfolio…

Trendy tech companies and startup culture may get a lot of attention these days, but innovative businesses don’t always make the safest bets. In fact, companies that sell the “basics” – or supply vital services – may be as lucrative as they are simple…

Cintas (CTAS) is a great example. The $20 billon company is a leading supplier of uniforms, ranging from work shirts and cargo pants to cold-weather outerwear and flame-resistant clothing. Over the years, the value of Cintas’ services has continued to grow… Just last week, it recently joined the Fortune 500, which distinguishes companies with the highest annual revenues. As of its latest earnings report, Cintas’ quarterly revenue increased 27% year over year.

Cintas’ simplicity and success has brought dependable gains to investors… Over the past year, the stock has risen more than 50%, recently hitting a new all-time high. It may not be flashy or groundbreaking, but it works… 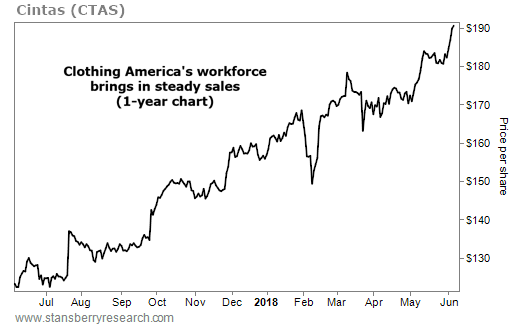