I Came Without Expectations... Now I Have Some
By Ben Morris
Wednesday, June 6, 2018

I've been in China for six days now... traveling with Steve as part of the Asia Investment Opportunities Conference Series.

I studied Mandarin Chinese for a couple months before coming. And while it's been helpful to know how to say a handful of things, I don't understand anyone's responses.

We're 12 hours ahead of U.S. Eastern time, which took about five days to get used to.

And I'm glad I'm an adventurous eater... even though you can find a Starbucks or KFC almost anywhere in Shanghai, where we are now.

All of us are enjoying the trip... And we're excited Hong Kong, which we set off for next.

In my DailyWealth Trader (DWT) service, I write about big trends, sentiment extremes, and managing risk. These are topics I've studied for years and think about deeply.

Writing about China – while jet-lagged and touring at a breakneck pace – isn't my normal fare.

But I do want to share my first impressions. You see, I am impressed.

I haven't written about this sort of thing publicly before. So I want to start by giving you some context...

I've traveled a good bit over the past 15 years...

I lived in Spain for four months toward the end of college. And after college, I moved to Costa Rica and sold real estate to foreigners for six years.

During my stint in Costa Rica, I backpacked through Central and South America for six months as both a fluent Spanish speaker and a Stansberry Research subscriber.

I've traveled to Haiti, Israel, Japan, and other countries... talking with locals at every opportunity.

My experiences have given me a unique perspective. For one thing, I've built long-term relationships with all types of people around the world. And I know what hopeless poverty looks like.

Let me tell you, that is not China...

I don't have much insight into the daily lives of the average Chinese man or woman. But at least in Beijing and Shanghai, people are hustling. Downtown, they're dressed professionally. In retail areas, they're selling, shopping, and eating well.

Beijing and Shanghai are each home to more than 20 million people. They're each larger than the top six U.S. cities combined.

To keep traffic down, the government has made it extremely difficult and expensive to simply get a license plate. Yet the streets are jammed with new Audis, BMWs, Mercedes-Benzes, and Volkswagens. Motor scooters are everywhere.

A couple nights ago, we took an evening river cruise in downtown Shanghai. The tour boat was packed with Chinese people holding high-quality cameras and phones. And the views of high-tech skyscrapers wowed all of us.

I took this shot standing on the deck... 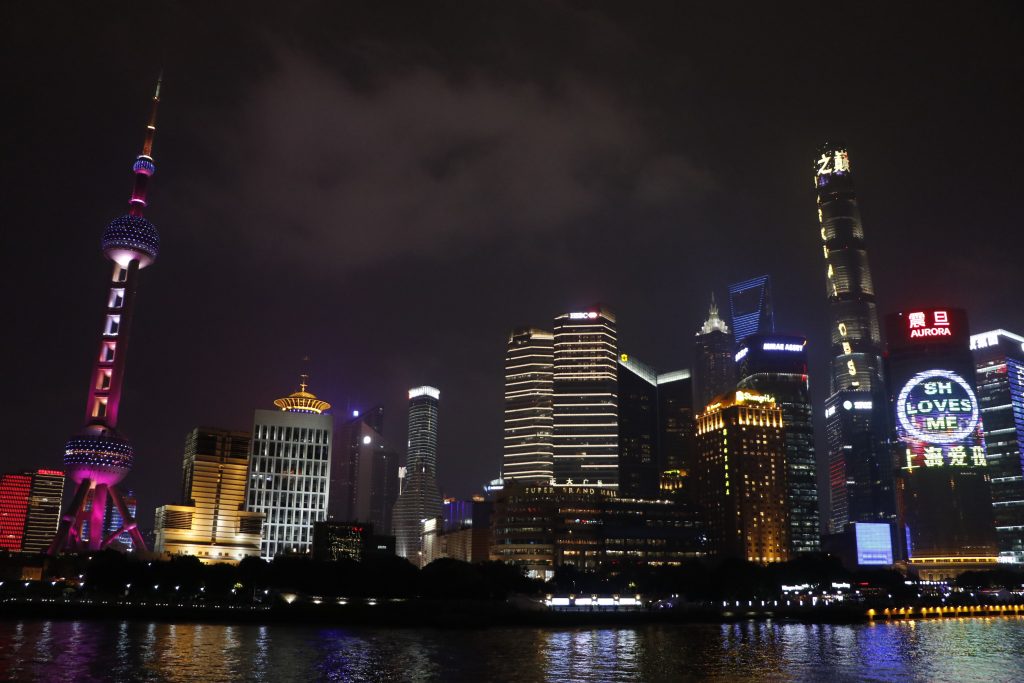 I still have a lot more to see and learn here in China. But the common American view that China's prosperity is a big front put on by the Communist government just doesn't hold up.

The developing countries I've been to before have felt poor and stagnant. China feels different. People seem happy, with a pretty good quality of life.

I encourage you to be skeptical. As with any investment, don't put more of your wealth into Chinese stocks than you're comfortable with.

But do read Steve's work here in DailyWealth. Over the past few years, he's been giving away some of his favorite ways to make money in China. And now that I've seen some of it for myself, I'm confident in saying the potential reward in Chinese stocks is worth the risk.

Start by dipping your toe in the water, if that's what feels right... Just don't miss out completely and kick yourself for it later.

This is a great investment opportunity. And it could have a long runway ahead.

Editor's note: One of the biggest opportunities in China is just starting to kick in. You see, stocks trading on the Chinese mainland are finally joining the world's major indexes... sending hundreds of billions of dollars flowing into Chinese stocks over the next five years. Steve reveals more ways to profit from this once-in-a-lifetime change in his True Wealth China Opportunities newsletter... To learn how to access a special offer, click here. (This link does not lead to a long promotional video.)

"The American perception of China versus the reality on the ground is as big a gap as I have ever seen in my investing life," Steve says. And as he explains, you can make a lot of money as these kinds of gaps start to narrow... Learn more here.

"Hundreds of billions of dollars will flow into Chinese stocks over the next couple years," Steve writes. The reason for this is simple... And we're starting to glean more details about what this historic change could look like down the road. Read more here.

Market Notes
THIS TECH TREND IS GAINING A FOOTHOLD IN THE U.S.

Regular readers know Steve believes no one will carry a wallet within the next five years. Instead, people will use their smartphones for daily purchases. This trend is already underway in China, where mobile payments totaled nearly $13 trillion for the first 10 months of 2017. And one San Francisco company is leading the way domestically…

Square (SQ) is one of the biggest names in mobile payments. You’ve probably seen its most popular product – a plug that turns any smartphone into a credit-card reader. The reader allows smaller merchants to accept credit cards when they otherwise couldn’t. By producing a quick and easy-to-use technology, Square has set itself up well for this rising trend…

As you can see in the chart below, Square is up more than 350% since it went public in November 2015. As mobile payments become the norm, watch for shares of Square to continue higher… 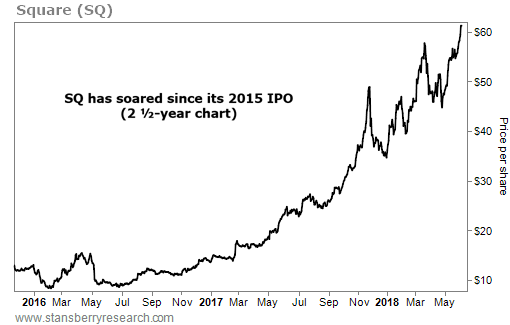