Don't Board Up Your Home Yet
By Vic Lederman
Thursday, November 14, 2019

I moved to Florida to work alongside Steve Sjuggerud about two and a half years ago.

His island home (and the nearby office on the beach) seemed like paradise. Then, I experienced my first hurricane season...

The storm hit the area where I live. My home, on relatively high ground, was fine. Many others near me weren't.

I'd never seen the power of weather quite like that. I grew up in Colorado. And the mountains of snow we got when I was a kid were nothing like the pounding force of a hurricane.

But the thing that stood out most to me wasn't the force of the storm. It wasn't the aftermath, either. Those were mostly in line with my expectations...

What stood out most to me was how people expressed their fear of risk... how they prepped for the storm.

Right now, a lot of investors are worried about the markets. They're prepping for another kind of storm. But as I'll show you today, these folks are going about it all wrong.

If you've never lived in a hurricane-prone area, let me tell ya – it changes the way you think about risk. Every person has his or her own way of dealing with the threat. I hadn't expected such a huge range of behavior.

But one group of people stood out the most. And it wasn't the last-minute shoppers that picked the store shelves dry.

No, there was one preparation strategy that you couldn't help but notice. That's because it came at an obviously high cost...

I'm talking about the "early boarder-uppers."

They were the group of people, mostly affluent, that chose to board up their homes ridiculously early. Some of them did it as soon as it looked like there was even a chance the storm would head our way.

Then, they got out of Dodge.

Now, I understand that everyone's life situation is different. For some of these folks, it probably was the best decision for them and their families. But many were falling into a classic human failing. It's one that investors fall prey to all the time.

They spent a lot of money trying to limit all possible risk... as early as possible.

The reality is, they should have had a little patience and saw how things progressed before making a rash decision. All it would have taken was a better risk-management strategy.

By waiting a few days, and getting more and better info, they could have made a better-informed decision about whether to leave. Maybe they could have avoided the hassle and cost of evacuating altogether.

The point is that trying to eliminate all risk can be a risk in itself... And it certainly has a cost.

We saw that exact same idea play out in the market this year...

UBS is the world's largest wealth manager. And in May, it released a stunning survey. The results showed that its high-net-worth clients had fled to cash. The primary reason was a fear of recession.

At the time of the survey, those wealthy clients were holding 32% of their portfolios in cash.

Simply put, they boarded up too early.

Now, don't get me wrong. The storm clouds of recession are on the horizon. They're even closer now than they were in May.

That doesn't mean it's time to board up yet!

There could easily be months, or even a year or more, of gains ahead of us. And boarding up now would mean that you miss the final stages of the Melt Up.

That's the "last hurrah" in stocks before the end of a bull market. And we're seeing what looks like the beginnings of it right now.

You have to remember... some risk-management strategies cost more than they're worth. And I'm sure that many of those wealthy UBS clients found that out as the year progressed.

They were caught boarding up too early. And the price they paid was too high.

Don't fall into that trap yourself.

"If you want to know how investors feel about markets, don't ask them," Chris Igou writes. You're better off knowing what investors are doing with their money. And despite U.S. stocks hitting all-time highs, you might be surprised by current investor sentiment... Read more here.

"The media makes every story seem like the end of the world," Vic says. With all the never-ending unrest around the globe, it can feel too risky to be invested in stocks. But there are simple tools you can use to manage risk and know exactly when to get into and out of a market. Click here to learn more.

Longtime readers know that we like to check in on different sectors to gauge how our economy is doing. When folks are buying more than just the basics – upgrading to things like swimming pools or luxury cars – that’s a good sign. Today’s company shows that folks around the world have extra cash to spend…

Sony (SNE) is an $80 billion multinational giant in entertainment and electronics, headquartered in Japan. From video games and consoles to televisions, Sony sells a wide range of products. And when the global economy is healthy, folks use their spare cash to splurge on gadgets. That’s happening today… Sony recently reported its strongest second-quarter profit ever, due to strong sales of its image sensors for smartphones. Management also raised its guidance for the year.

As you can see, SNE shares have done well for investors. They’re up more than 200% over the past five years. And with plenty of consumers buying phones and TVs worldwide, things can’t be all that bad… 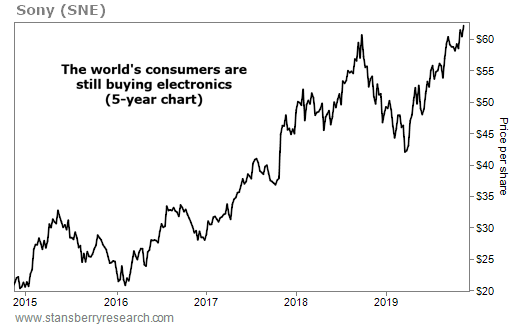