Putting the Naysayers on Notice
By Vic Lederman
Monday, November 4, 2019

There's always a reason not to invest. Seriously.

Brexit, the trade war, unrest in the Middle East... These days, the reasons feel pretty compelling.

My guess is, you've fallen victim to at least one of these. We all do.

The media makes every story seem like the end of the world. And that noise compels you to overestimate the risks.

After all, you've heard the warnings... that this is one of the longest bull markets... and it's losing steam... and there are recession indicators flashing.

It sure feels scary. So, you get out. You move to higher ground, with a non-specific plan of getting back in when it's less scary out there.

Maybe you think, "I'll just wait till after the next correction."

Last Monday, U.S. stocks made new 52-week highs. And it happened despite all the bad news out there. The trade war, Middle East tensions, and high valuations didn't stop it.

That market wanted to hit new highs, so it did. It's more than that, though.

This wasn't just a new 52-week high... it was an all-time high. Take a look at the recent breakout below... 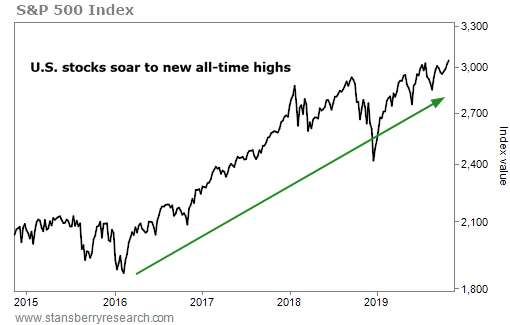 Despite every fear in the world, stocks have marched on. And you should have been marching with them.

If you weren't, I'm guessing it's because the naysayers scared you. But fear only wins when you don't have the tools you need to make the right decision.

Fear is what kills your portfolio returns. It keeps us out of markets when we should be in. And it prevents us from getting all of the investment gains we might achieve otherwise.

Fear is on the sidelines whispering, "Take your gains or losses and step aside... before the worst happens." It's the ultimate naysayer.

So, we need tools that'll allow us to bypass our fears, and the rest of the naysayers, too. And I have two that you can put to work in your portfolio today.

First, you need to learn how to protect your downside. Once you've learned how to manage risk, you'll gain the confidence to stay in positions you believe in.

One of the simplest tools you can use to manage risk is the trailing stop. It tells you exactly when to get out of a trade. For example, a 25% trailing stop will follow your position up as it rises... and get you out if it falls 25% from its highs. (If you need to brush up on exactly how trailing stops work, start here.)

With the trailing stop on your team, you'll always have an exit strategy. There won't be any question of "should I get out now, or later?" You'll know exactly when your trade has come to an end. And that means you won't sell early out of fear if it isn't actually time to move on.

Now maybe you're wondering, "How do I know if I should be in a broad market at all?" That's where our second tool comes in.

It's the simple moving average ("SMA").

The simple moving average is a way to measure the trend over a given time frame. This will help you make sense of the historical performance of a market... It'll tell you if the uptrend is in place (when you want to buy), or if a downtrend is occurring (when you want to sell). 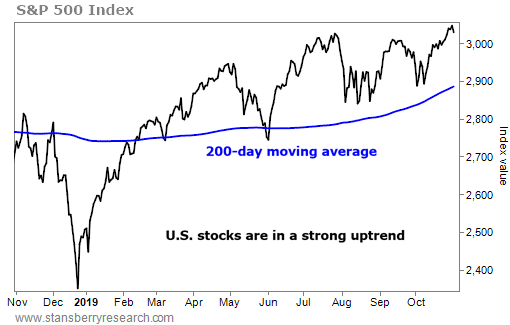 If you're new to SMAs, I urge you to learn more about them right here.

With these two tools, we can put the naysayers on notice, and take back our investing confidence.

Combined, they'll help you have the confidence to know when it's safe to get into a market. And they'll show you exactly when to get out.

Remember, there's always a reason not to invest. The news is filled with them today. But a fear-based approach to investing is a disaster in the making.

You don't want to be sitting on the sidelines while the market makes new highs, right?

That's exactly the situation we're in today. The markets are making new highs. And the naysayers are louder than ever.

Now you have the tools to put the naysayers on notice... and make investing decisions based on historical data, with a rock-solid exit strategy.

P.S. For 20 years now, Stansberry Research has been putting the tools to financial success in your hands. So in honor of our anniversary, we wanted to do something special... We've rolled out two huge developments that we think you'll like, including a new way to use our research... and a deal that could rival our original Alliance membership offer. But time is running out to get on board.

To learn more – and to get an inside look at what makes Stansberry different – watch our video here.

"The big worry with consumers is debt – how much they have, and the effect it'll have on them in the future," Chris Igou writes. "The popular story is that consumers are drowning in debt." The financial media has been promoting this narrative... but Chris isn't convinced. Get the details right here.

"Simply put, folks are scared," C. Scott Garliss says. "And they're showing it with their investment dollars." Many investors are expecting the worst... but you don't have to be one of them. Learn more here: Wall Street and 'Mom and Pop' Are Both Getting It Wrong.