If you want to know how today's economy is doing, look no further than the consumer.

Consumer spending makes up 68% of gross domestic product ("GDP") in the U.S. That's a bit hard to believe. Two-thirds of our economy is based on consumers.

That means if the American consumer is doing well, the economy is strong. But if the average consumer weakens, it's bad news for the economy.

Of course, the big worry with consumers is debt – how much they have, and the effect it'll have on them in the future.

The popular story is that consumers are drowning in debt. But as we'll see today, that's not really the case.

One way to see that things aren't so bad is to look at how much of their income consumers are putting into debt payments, as we showed you recently.

But another way to see it is through consumers' ability to pay off loans. If a rising number of consumers fail to pay off their debt, it's a sign that times are getting tough.

That's not the case today. Delinquency rates on consumer loans remain near 30-year lows... And that's good news for the U.S. economy.

Interest rates have remained extremely low for a decade now. And that means consumers can borrow cheap money to buy goods.

The last part is nothing new. Societies have used debt to grow wealth for centuries. And a lot of the time, your typical consumer is financing part of his purchases.

That alone isn't a problem. But when debt starts to weigh too heavily on consumers, it becomes one.

The result tends to be a spike in loan defaults. That's been the case historically for more than 30 years.

In fact, before each of the past three recessions, delinquency rates hit 3.5% or more. We are nowhere near that point today, though. The rate is just 2.4% as I write. That's well below a concerning level, as the chart below shows... 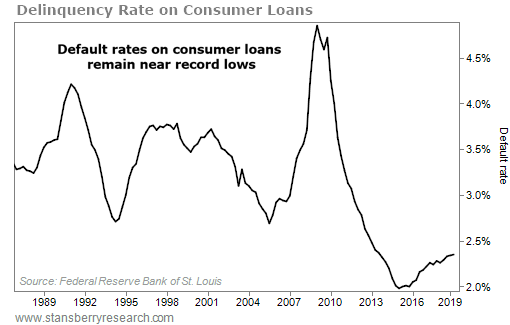 Is it at a problematic level, though? No way!

We're still well below the long-term average. And we're even below the levels that were more typical in the 1990s and 2000s.

So, while consumer debt has risen since 2009, that alone shouldn't scare you. As long as consumers can easily make payments on their loans, that's a good thing for the economy.

You might argue that this all depends on interest rates staying ultra-low. And that's somewhat correct. But folks have been predicting a return to significantly higher rates for the past decade. It hasn't happened yet.

Those calls might be right one day. But we've got to make decisions based on what's actually happening... right now.

Today, we're seeing no signs of strain on the U.S. consumer. Folks aren't defaulting at high rates. And until that changes, the U.S. economy should continue to do just fine.

"Every bit of wealth you save earns you more freedom," Dr. David Eifrig says. In this essay, he walks through a few simple steps to help young folks save money and pay off debt early... Read more here: The Guide to Wealth Every Young Investor Needs.

"You've probably heard a lot of worries about slowing earnings growth," Joel Litman writes. But you have to look at the real numbers – because he believes the ones that Wall Street analysts track are completely misleading. Learn more here: The Numbers Are Lying... And That's Great for Stocks.