The 'Pros' Are Getting It Dead Wrong
By Steve Sjuggerud
Tuesday, September 17, 2019

Professional investors LOVE bonds right now – more than they have in over a decade.

You know me... I don't want to follow the crowd. Instead, I want to buy what's HATED – not LOVED.

The "professionals" on Wall Street are ignoring the most important anomaly in the market today. And they're advising folks to do the exact wrong thing as a result.

Let me give you the specifics...

Later in the report, it said fund managers have their highest allocation to bonds since 2011.

Meanwhile, long-term bonds are the worst deal they have been in American history based on what they pay. Ten-year U.S. Treasury bonds were paying less than 1.5% interest just a couple weeks ago.

So it's shocking that fund managers see the biggest opportunity in bonds – bonds that pay some of the lowest yields in history.

This tells me the "pros" have forgotten one of the most critical rules in finance...

I've been in the finance world for more than 25 years. And as you know, one of the major takeaways I've learned is that money flows to where it's treated best. It's that simple.

So let me ask you this... With stocks trading at reasonable valuations and bonds paying almost nothing, is your money treated best in the bond market?

The pros have gotten this one wrong today. They say to buy bonds. I say they're nuts!

It's even harder to believe, considering the anomaly that just happened between the stock and bond markets. This one's truly crazy...

Just a couple of weeks ago, U.S. stocks were yielding more than long-term U.S. Treasury bonds.

I'm not kidding. You were getting paid LESS to lock up your money with the government for 30 years than to put it in stocks.

That's nuts. It's the kind of thing that should never happen.

You see, in normal times, investors are willing to take less yield in stocks for the chance to make capital gains. Stock market dividends have always been just a little something to sweeten the deal... especially over the last couple decades as share buybacks became so popular, pushing capital gains higher.

On the other hand, investors expect a higher yield when they put money to work in Treasury bonds because they won't see any price appreciation.

That's the normal order of things – but it's not what just happened. Instead, there was a multiday stretch where the stock market paid higher yields than 30-year Treasury bonds.

If you're thinking this sounds like a rare event, you'd be right. It's only happened two other times going all the way back to the 1980s... in 2008 and 2016. And both of those instances were fantastic times to own stocks. (I'll explain the full details in tomorrow's issue of DailyWealth.)

The implication here is obvious... We could be on the verge of a major move higher in stocks. That might seem crazy right now, during the late innings of a great bull market. But it's my Melt Up thesis in action.

The majority of the world is scared. Folks believe stocks "should" fall after this historic run-up. And that's caused the pros to get extremely bullish on bonds... at the worst possible time.

I say to do the opposite. Be bold and buy. Now is the time to do it.

"This late in a bull market, we'd expect investors to be excited," Steve says. "But as you can probably guess, that's not the case." Despite this mass fear, Steve is still pounding the table on stocks... Read more right here.

"Last month, one of my major 'red flags' for a recession went up... and trust me, it's big news," Steve writes. The financial media has been all over this event. But Steve's take might surprise you. Get the details here: The Yield Curve Just Inverted... Time to Sell, or Buy?

Market Notes
DEMAND IS STILL HIGH IN THE HOUSING MARKET

Regular readers know Steve is still bullish on housing. Mortgage rates are about as low as they come, increasing housing affordability. But prices remain high due to limited inventory. That’s good for homebuilders, as we recently covered with best-in-class homebuilder NVR (NVR). Today, we’re looking at another example…

PulteGroup (PHM) is a $10 billion homebuilding giant. It does business in 25 states and 47 major markets across the U.S. Pulte serves every kind of house-hunter, with 30% of its sales going to first-time buyers, 30% to folks looking to upgrade, 25% to seniors, and 15% to luxury homebuyers. And demand is strong today… In the company’s second quarter, new orders for homes rose to 6,792 homes, a 7% increase over the same quarter in 2018.

As you can see in today’s chart, shares of PHM have been steadily rising since they bottomed in October. The stock is up more than 30% in 2019, and it recently hit a new multiyear high. It’s another sign of the strength in U.S. housing today… 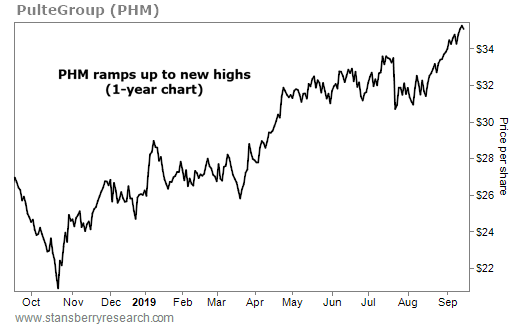