Last month, one of my major "red flags" for a recession went up...

It's called an "inverted yield curve." And trust me, it's big news...

You've probably noticed the financial media has been eating this story up. But what you probably don't realize is that they've got it all wrong.

They see the inverted yield curve as a bad sign. But in the short term, this is hugely positive for stocks.

It was the middle of last month when the yield curve I've been tracking first inverted. It happened only briefly during the day. But the financial media was all over the story.

Here was the headline on Yahoo Finance... 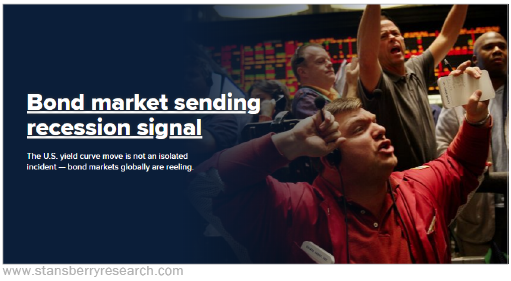 The clear reaction was fear. And that fear has continued... especially after the yield curve inverted again for several days in a row at the end of last month.

The financial media, and most investors, believe an inverted yield curve is the sign that the end is near. And ultimately, it is.

The yield-curve inversion is actually a major bullish sign for stocks in the near term. No kidding.

First, remember that an inverted yield curve is an odd scenario... After all, if you're locking your money up for 10 years, you should demand a higher interest rate than if you're locking it up for only a year or two. The reduced flexibility (and heightened risk) of long-term bonds should come with higher yields.

When this isn't true, it means something wonky is happening in the economy. And you can usually point the finger at the Federal Reserve.

Until July, the Fed had been on a rate-hiking spree. It has since reversed course – but that didn't stop the yield curve from inverting.

Now, let me be clear on a couple of things...

An inverted yield curve is the best recession indicator I know of. It's as good as it gets at spotting potential hiccups in the U.S. economy.

In addition, stocks tend to have their biggest falls during recessions. So if a recession is coming, the odds of a stock market bust are higher than ever.

There's an important caveat, though... Neither of those things mean a crash is imminent. I explained this back in January when the yield curve was getting close to inverting. But the story is worth repeating today.

Now that the yield curve has inverted, history says we should expect big gains over the next six to 18 months.

The financial media has completely missed this part of the picture. Instead, they play on our fears and start wailing that the end is here. That couldn't be further from the truth.

The last three times the yield curve inverted, the market didn't peak until 18 months later... each time. And stocks gained 21% on average.

In 1998, the inversion happened almost two years before stocks eventually peaked. Stocks soared 40% over that time.

Now isn't the time to be fearful and sell. It's the time to know your history... and stay long.

History says it should be a year or more until stocks eventually peak. And we'll likely see big gains between now and then. That's why I continue to recommend staying long.

P.S. I'm planning to share my latest thoughts on the Melt Up next month at our Stansberry Conference in Las Vegas. And while it's too late to join us there, don't worry... You can still watch our amazing lineup of guest speakers – and hear my presentation – from the comfort of your own home. Find out how to get your online all-access pass right here.

Stocks have been soaring since 2009... and many readers wonder how Steve can still be bullish today. He recently explained how stocks are cheaper than anyone realizes – and examined why the bull market still has room to run. Catch up on his two-part series here:

Market Notes
THIS LANDLORD PROFITS FROM THE BULL MARKET IN HOUSING

Today’s company is a one-click way to own 100,000 in-demand apartments…

Regular readers know about real estate investment trusts, or REITs. These companies own buildings, rent them out, and then pay out at least 90% of their income to shareholders. That means you get the profits of being a landlord without all the stress. During today’s bull market in housing, this REIT has carved out a lucrative niche…

Mid-America Apartment Communities (MAA) buys and develops apartment buildings in 17 states and Washington, D.C. Unlike some big apartment REITs, Mid-America mainly focuses on the American Sun Belt… not ultra-competitive markets like New York City or San Francisco. It’s been a good business… Mid-America’s average rent rose 3.2% in the most recent quarter. And it had tenants in 96% of its same-store portfolio, which covers 96,000 apartment units.

Over the past five years, MAA shares have returned about 115%, including dividends… and they recently hit a new all-time high. With Americans eager to rent its apartments, Mid-America is well-positioned for success… 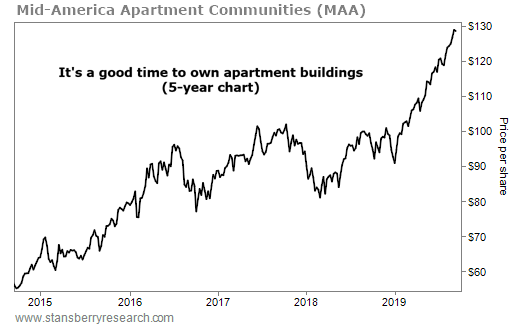