It's Still Smart to Bet on Housing
By Steve Sjuggerud
Tuesday, April 23, 2019

We are in the late stages of a massive wealth-creation event. When it's over, we likely won't see another opportunity like it for decades.

If you invested in housing in the last few years, you've likely made incredible gains... whether you bought a house or invested in real estate stocks.

I hear this all the time...

"Steve, home sales fell hard in 2018. Houses aren't as cheap as they were five years ago, either. Doesn't that scare you?"

The concerns are understandable. But these ideas miss the bigger point.

Yes, home sales had a rough year last year. And yes, home prices have moved higher in recent years. But when you look under the hood, the housing market is actually healthier than you think.

It's still smart to bet on housing now.

First, let me be very clear... I'm not calling for another decade of booming housing prices.

Today's opportunity isn't the generational one we saw back in 2011. But there are a couple reasons why we should expect housing to do well over the next couple of years.

The first is that housing is a better deal than a lot of folks believe. That's normal after a decadelong boom. But thanks to the recent decline in mortgage rates, housing isn't out of reach for most. 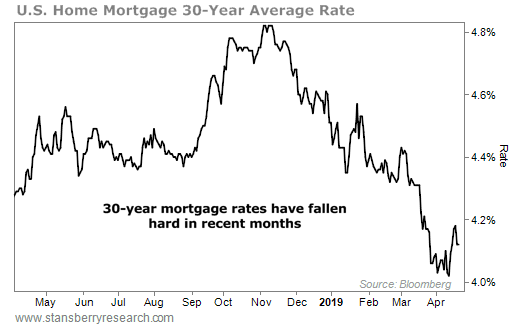 Falling mortgage rates tell us it's getting cheaper to take out a home loan. That's great for folks who are looking to buy in today's market – and it should continue to drive demand.

On top of that, supply in the housing market is still extremely low... Homebuilders can't keep up with demand.

You can see this by looking at existing home supply. It's based on how many months it takes to sell the entire supply of existing homes on the market, according to current sales rates. Check it out... 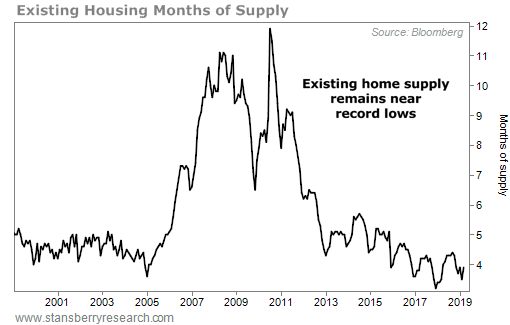 The housing market is extremely tight. The number of existing homes on the market is historically low today.

That creates an interesting scenario...

With mortgage rates falling, housing has recently become more affordable. That should increase demand, bringing new buyers into the market. But they'll be coming into a market with incredibly low supply.

This isn't what the average person would expect, of course. But it's the reality of what's going on in the housing market right now.

U.S. housing is much healthier than most people believe. And I expect the boom to continue in the coming years.

"If you're fearful of what's next for stocks... you're not alone," Steve writes. But instead of letting fear drive your decisions, he says investors need to look at the facts. A recent event points to more upside ahead... Learn more here.

"Rising rates, combined with higher home prices, put the affordability of homes further out of reach," Steve says. "That's the narrative, at least... But the reality is much different." Back in February, he debunked a common investor perception about the housing market. Read more here: The Housing Boom Isn't Over Yet.

Today, we’re revisiting the simple genius of “selling the basics”…

While companies that sell cereal, peanut butter, toothpaste, and trash bags may not be the most exciting for investors, they usually produce steady long-term growth. Like clockwork, folks consume these products on a regular basis – then go out and buy more. Today’s company is a perfect example of how great this business model can be…

PepsiCo (PEP) is a $177 billion maker of snacks and soft drinks. The company boasts well-loved brands like Pepsi (soda), Gatorade (sports drinks), and Lay’s (potato chips). While these products aren’t in high-growth industries, they have a large, steady customer base. And that’s great news for PepsiCo… In the first quarter alone, the company reported sales of roughly $12.9 billion, nearly 3% higher than the same period last year.

As you can see in today’s chart, PEP shares are rallying. The stock is up nearly 25% over the past year, and it recently hit a new all-time high. It’s more proof of the gains that are possible in companies that “sell the basics”… 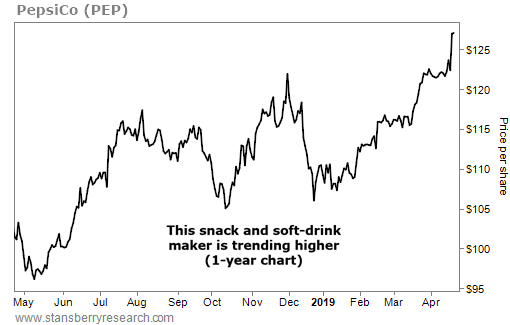