This Is Why the Current Correction Isn't a Melt Down
By Steve Sjuggerud
Thursday, January 10, 2019

Last week, I put more money to work in U.S. stocks than I ever have in my life...

How could I invest so confidently after the December crash? And why do I believe now is such a great time to buy?

I shared a few reasons why on Tuesday. But today, I'll share another major reason. It's even more important as to why I'm so confident – both right now and over the next 12 months...

You see, the big concern everyone has with buying stocks today is this...

How do you know that the current correction isn't the start of the next "Melt Down"?

I've got a simple answer that I'll share today. Actually, make that two...

Today, we're making another "regular check-in" on two indicators with near-perfect track records of calling Melt Downs before they begin. As I'll show you, these two measures get to the heart of why I'm buying stocks now, when so many other investors have been spooked out of the markets.

I can't know the future, of course. But if you ask me why I don't believe the current correction will become the Melt Down, my answer is simple...

As you likely know by now, I check up on several early warning indicators to measure the health of the bull market on a regular basis.

Two indicators I follow have flashed ahead of basically every market peak and recession of the last few decades. Importantly, they have NOT signaled yet this time around.

We're getting close to a signal on one of these indicators. But as I'll show you, that doesn't mean it's time to panic.

My first indicator is called the Leading Economic Index ("LEI" for short).

It comes from an independent research group called the Conference Board. The Conference Board's LEI for the U.S. looks at 10 different economic indicators – everything from employment to housing. If you want to get a broad look at how the economy is doing, this is one of the best ways to do it.

This indicator also has a powerful track record of predicting recessions (which tend to coincide with stock market crashes, as I showed you last month). 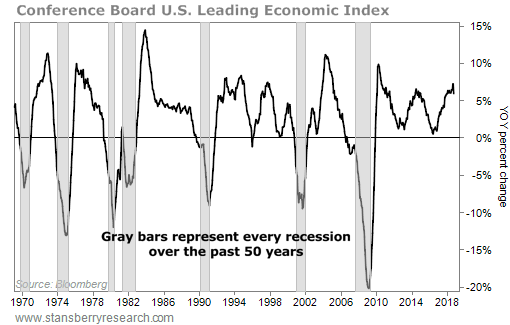 This indicator is reliable – it's only given one false recession signal. And right now, it's nowhere near dipping below zero.

That tells me that the economy is still growing... And a recession and stock market bust is NOT imminent.

This brings us to my second indicator. If you're a longtime reader of mine, you already saw this one coming...

In a healthy market, long-term rates should be higher than short-term rates. Investors demand higher payments when they lock their money away for a long time.

However, this historically normal relationship is changing now... The Fed has been hiking interest rates in recent years. Short-term rates have risen. Long-term rates have, too, but not nearly as quickly.

History tells us that when the yield curve inverts (and two-year yields move higher than 10-year yields), bad times are ahead in stocks. You can see it in the chart below... 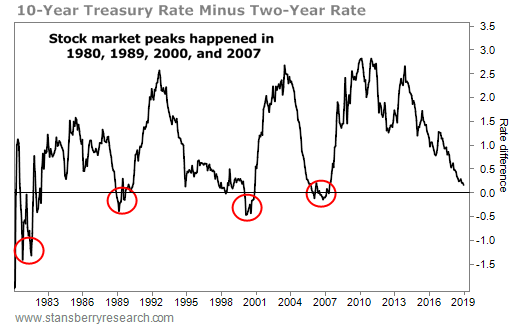 This has worked going back 40 years. Stock market peaks happened in 1980, 1989, 2000 and 2007. They happened every time the yield curve inverted and the line dropped below zero.

This indicator has been inching closer to zero in recent months, but we're not there yet. That's important. It tells me the current correction likely isn't the next Melt Down. History says the Melt Down shouldn't begin until this indicator moves below zero.

Not only that, but this tends to be a leading indicator. That last point is incredibly important: This indicator doesn't signal at the peak... It signals before the peak.

Generally, stocks have another 12 to 18 months of good times after the yield curve inverts. We haven't seen a yield-curve inversion yet. And even if we did, we should still be clear in stocks for at least 12 months, based on history.

That's why I have the confidence to buy when others are fearful.

I know from more than 25 years of experience that a worried market often gives us a major investing opportunity... But looking at these hard measures is what gives me courage in my convictions. It keeps me from making decisions based on emotion.

So it's OK if you call me crazy for what I did last week... by making my largest-ever commitment to stocks.

The incredible December correction created a buying opportunity. And the two indicators above (with great track records) tell us this bull market still has room to run.

In my opinion, based on my experience and my number-crunching... the "Melt Up" is back. And I'm simply getting positioned to take advantage of it.

I encourage you to do the same. Base your investing decisions today on hard data... not emotion. And as always, follow your trailing stops to protect your downside.

"This market fell roughly 24% from its peak early last year," Brett Eversole writes. "And that means right now, this group of stocks is dirt-cheap." Get the details about an opportunity in a specific sector poised for big gains ahead right here: This Market Is Record-Cheap and Ready to Soar in 2019.

"Today, a lot of folks are worried about the next Melt Down in stocks... But I'm not worried," Steve says. Learn more about how the health of the U.S. economy affects the markets right here.

These days, cloud services have gone beyond simple data storage to redefine how businesses operate. According to media company SiliconANGLE, cloud spending from businesses will increase 17% annually over the next several years. And some stocks in the sector are already seeing big gains…

For example, look at Twilio (TWLO). Its clients use Twilio’s cloud-communications platform to meld voice and text communication into their programs. It can even set up bots to hold conversations in real time using artificial intelligence. And with big names like Coca Cola (KO) and Twitter (TWTR) relying on its services, Twilio’s growth has exploded. The company reported a whopping 68% increase in year-over-year revenue for the third quarter, along with a 30% spike in active customer accounts.

As you can see, the stock is up more than 250% over the past year, and it recently hit a new all-time high. With the cloud-computing industry expected to blow past $400 billion by next year, businesses like Twilio are poised for massive growth… 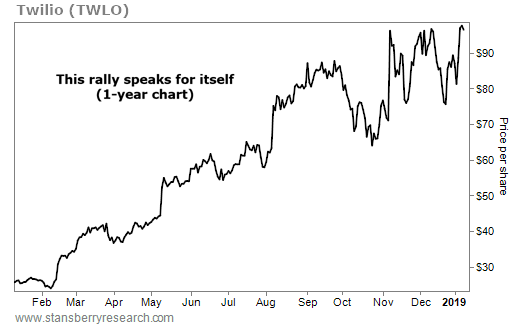