What I'm Doing With My Own Money Right Now
By Steve Sjuggerud
Tuesday, January 8, 2019

Last week, I made my biggest commitment to stocks – ever.

I invested more in stocks last week than I ever have before, by far.

Don't get me wrong here... I'm not saying that what I do with my money is what you should do with your money.

I am saying you should know – at this critical moment – why I'm buying stocks now... and what I expect from the markets after the frightening gyrations we've seen recently.

For a little background here, I don't do this often...

The last time I made a major commitment to stocks like this was back in late 2008...

Back then, I put essentially all of my financial assets to work in stocks – and then some.

I even took out a line of credit on my home and I invested it in the stock market. (I had never done that before, and I've never done it since.)

Why was I so confident? Because EVERYONE was scared. There was nobody left to sell.

And how did it work out? I doubled my money in 13 months in one particular hedge fund. I cashed out of that fund, repaid the home equity line with the proceeds, and let the other investments ride. (I still own one private fund I bought back then.)

I've told this story before here in DailyWealth. And I'm sharing it again today for one reason...

Why am I doing this now? Because the opportunity today is similar to what I saw back then...

"I'm scared as hell," one family friend told me at a holiday party two weeks ago. "Trump, the trade war, the market volatility... I'm getting OUT."

I couldn't say it at the party, but that "scared as hell" sentiment is what I live for as an investor.

When I see and hear that people are "scared as hell" – it's game time. It doesn't happen often. But when it does, that's when you tend to get the biggest upside potential – and you have to take advantage of it. I personally took advantage of it in...

It's been a few years since I've "backed up the truck" to buy, like I did with those trades.

I've been setting cash aside, waiting for the next "scared as hell" investment. Now, here we are. And I'm taking advantage of it...

So how did we get to this "scared as hell" moment?

It didn't happen all at once. It built up over time, with fear peaking right around Christmas.

Take a look at the daily stock market returns leading up to the holiday... 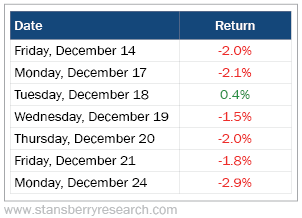 On the morning of December 26, it looked like the pain would continue... The benchmark Dow Jones Industrial Average opened around 22,000 and immediately fell a few hundred points.

Then, an interesting thing happened to finish the day...

Let me recap that day... The Dow fell a few hundred points at the open... then it soared more than 1,000 points to finish the day.

That was the moment.

That was the day.

December 26, right before 11 a.m., was the "puke point." (At least, that's what the New York traders I worked with more than 25 years ago would have called it.)

That was the moment where everyone who was going to give up, gave up. That was the point of maximum fear.

I've seen it so many times, in so many asset classes, all over the world. And that is exactly what it feels like.

The next day, the market did exactly what it should after the moment of maximum fear...

On December 27, stocks fell in the morning before closing much higher. Stocks climbed about 900 points from their lows around 2:30 p.m.

Since then, the market has held up just fine. Those December 26 intraday lows are a long way below us at this point.

The point of maximum fear typically marks the bottom. It shows us when nobody else is willing to sell. My experience tells me that December 24 will likely be the closing low for the recent correction.

So last week, I personally put more money in stocks than I ever have before. And if I'm wrong, I will cut my losses based on those December 24 closing lows.

You are free to disagree with me. You are welcome to say, "Steve, the trend isn't backing you up – yet." And you are right.

Again, I'm not saying that what I've done is right for you...

However, you should know this could be an INCREDIBLE buying opportunity. It's up there with some of the biggest successes of my career.

"Market sell-offs do have a silver lining," Brett Eversole writes. "If you're able to dig down and find the courage to act, you can quickly earn big returns." Get the details on a recent promising setup right here: We Have 31% Upside Potential in This Global Juggernaut.

"We want to be invested right now... while we can still capture this huge upside potential," Steve says. Learn why he's so confident during this tough market environment right here: I'm Still Not Worried About the Melt Down.

Today, we look at yet another recent plunge in retail…

We’ve covered a lot of struggling retailers recently, including mall staples like JC Penney, Sears, and even Build-a-Bear Workshop. Consumers have fully embraced shopping online, and the shift has weighed on many traditional retail stocks. Today’s company is yet another example…

The Children’s Place (PLCE) is a $1.5 billion children’s apparel retailer. The company operates almost 1,000 “Children’s Place” and “Baby Place” stores across North America. But the business is facing serious headwinds… According to financial-services firm First Data, sales of children’s clothes fell 5.9% in December. Plus, online retail is pushing out top competitors in the space – like Gymboree, which could soon file for bankruptcy for the second time in two years. Finally, last month, The Children’s Place slashed its earnings expectations for the fiscal year.

As you can see in today’s chart, investors have had it. PLCE shares have fallen more than 40% from their 2018 highs, and they recently hit a new 52-week low. We’ll see if this “retail apocalypse” victim can adapt in an increasingly competitive market… 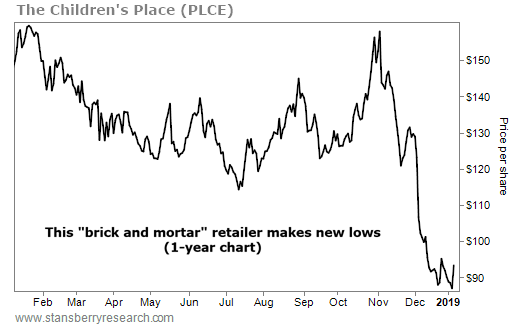