It might be the most important piece of information that most investors don't fully understand...

If you want to know when stocks will crash, look at the economy.

In yesterday's DailyWealth essay, I explained how every major stock market crash in the U.S. has happened during a recession. It's a simple yet powerful fact. And it's one way to gauge if you should be worried about the markets or not.

Today, a lot of folks are worried about the next "Melt Down" in stocks. The bull market is nearly a decade old. Combined with the fall in stocks last week, that has folks expecting the worst.

But I'm not worried. My indicators say that a recession isn't just around the corner.

Today, I'll share two indicators with fantastic track records of calling recessions ahead of time. They both show that investors have no reason to worry today.

Our first indicator is familiar to most folks. We're starting with unemployment... 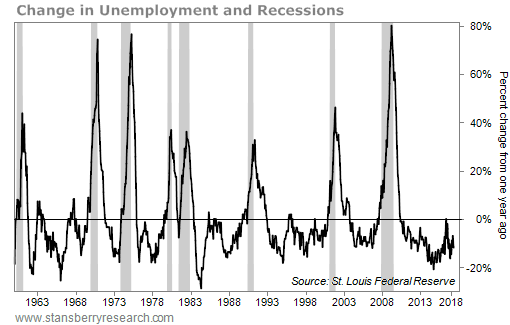 When the line moves above 0%, it shows an increase in the unemployment rate over the past year. That's bad. It means unemployment is rising... and the economy is weakening. These increases have occurred before every recession since the late 1950s.

We have seen some false signals along the way. Not every increase in unemployment means a recession is coming. But it's clear that a swift move higher is a bad sign. It often means the economy is in bad shape, with a recession on the way.

If you look at where we are today, you can see the unemployment rate in the U.S. has been falling for years. It peaked at 10% in 2009 and sits at 3.7% today. That's the lowest post-recession reading we've seen. So clearly, rising unemployment isn't a concern today.

That won't last forever, of course. But the unemployment picture will need to change dramatically before the U.S. sees another recession. We're not there yet.

The next indicator is the Leading Economic Index (LEI)...

It comes from an independent research group called the Conference Board. The Conference Board's LEI for the U.S. looks at 10 different economic indicators – everything from employment to housing to interest rates. It's as close to an all-encompassing figure as anything else that exists.

This indicator also has an incredible track record of predicting recessions. 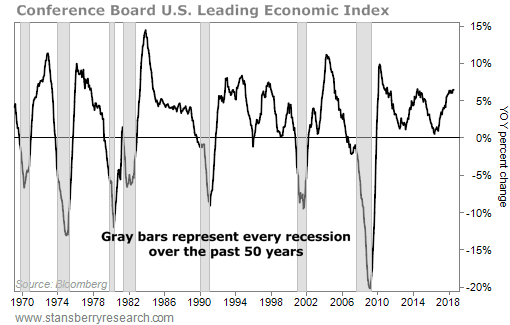 This indicator is more reliable than the change in the unemployment rate. It's only given one false signal. And right now, it shows positive economic growth.

We last checked in on this measure back in September. It's essentially unchanged since then. Despite the volatility in stocks that started in October, we're in no danger of going negative today. That means the economy is healthy.

I'll be worried when the LEI begins to fall... eventually leading to a negative year-over-year return. That will be a sign of a recession and tough times ahead.

We can monitor the economy in dozens of different ways. But these are two of the most reliable indicators for early warnings signs of recession. And neither says to worry today.

This also suggests that the Melt Down in stocks isn't here yet.

I believe this is only a minor pullback in the middle of the greater "Melt Up." We'll likely see several corrections along the way, like the one we saw in October. But as long as the health of the economy stays intact, you have nothing major to worry about.

Stocks still have incredible upside potential from here. Don't let a painful week scare you out of the stock market.

"We're nearly a decade into this bull market," Brett Eversole writes. "But while a bear market is inevitable, it isn't necessarily imminent." Learn why selling at the first sign of trouble is a bad idea here: Don't Fear This Bear Market Indicator.

"After so many down days lately, it's no surprise investors are feeling fearful," Vic Lederman writes. "But market volatility like we've seen is actually pretty normal." Get the details on another bear market indicator that has flashed warnings before every recession over the last 40 years right here.

Today, we’re taking a look at another utilities business in a steady uptrend…

No matter what happens with the economy, people will always need water, electricity, and gas in their homes. This is why we’re big fans of utility stocks. Utility companies often hold monopoly positions in their markets, which makes them great long-term investments…

Just consider UGI (UGI). The company owns a number of subsidiaries in the energy sector, most notably AmeriGas – the largest propane distributor in the country. UGI’s utilities business alone provides more than 600,000 customers with natural gas and 60,000 with electricity across Pennsylvania. Meanwhile, UGI reaps the rewards of providing in-demand services… In its most recent earnings report, UGI announced that total sales jumped 25% over the past fiscal year. And its profits grew 65% to nearly $720 million.

And as you can see, the stock has climbed nearly 20% over the past year. Shares recently hit a new all-time high. Meeting the energy needs of thousands of Americans continues to be a winning business… 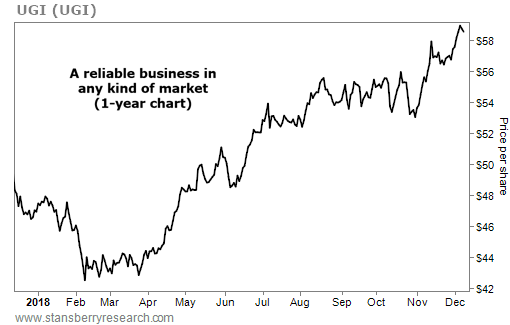