This Market Is Record-Cheap and Ready to Soar in 2019
By Brett Eversole
Monday, January 7, 2019

We have a simple recipe for making money in the markets...

Find something that's dirt-cheap... that no one else is interested in owning... and buy it once prices reverse.

My colleague Steve Sjuggerud calls this buying what's "cheap, hated, and in an uptrend." And it's a powerful way to invest.

Today, I'll share a market that meets two of these three criteria. It's record-cheap, as I'll show. And after a terrible 2018, investors aren't interested.

Similar setups led to 20%-plus rallies. We'll just need to wait for prices to rally. So read on... I'll tell you one of the simplest ways to put money to work when the time is right.

This market has gotten so cheap that it's one of the best values in the world today.

To find this fantastic value, we had to look outside the U.S. Specifically, we checked in on Asian markets. These stocks took a beating in 2018...

The "trade war" spat between the U.S. and China is mostly to blame for those big losses. And one of the worst-hit markets was Hong Kong.

The market fell roughly 24% from its peak early last year. Investors have no interest in buying after such a terrible year. And that means right now, this group of stocks is dirt-cheap.

We can see this through the price-to-earnings (P/E) ratio for Hong Kong stocks. The P/E ratio is a measure of valuation. It tells us immediately if a market is cheap (low P/E) or expensive (high P/E).

Today, as you can see in the chart below, the P/E ratio for Hong Kong stocks is near a decade low... 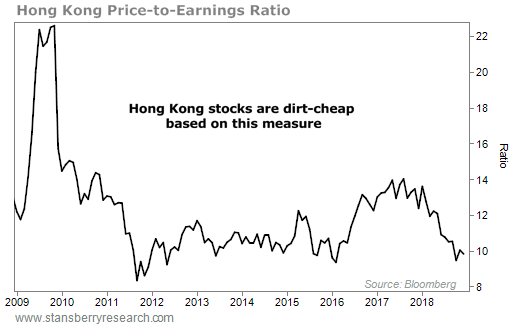 Not only has Hong Kong's P/E ratio crashed, it's now bumping into multiyear lows... and some of the lowest levels of the past decade.

Investors aren't buying Hong Kong stocks today. They're too spooked after a year of poor performance. But these ultra-low valuations mean big gains are likely from here.

Now, this sample size is small. But you can look at just about any asset over time and know that buying cheap is a good idea. Hong Kong is no different.

The recent sell-off has set up a fantastic opportunity to own Hong Kong stocks. Investors hate them, and they're near decade lows right now.

That's the "cheap and hated" part of the equation. Unfortunately, the "uptrend" in nowhere to be found. So you've got to be patient before taking advantage of this opportunity.

I recommend you keep a close eye on the iShares MSCI Hong Kong Fund (EWH). It's a simple fund that tracks the Hong Kong market. And it's the easiest way to make this trade.

If EWH begins to break out, consider putting money to work. An uptrend is all we need to seize this fantastic moneymaking opportunity. And once prices reverse, history says we could see a strong rally of 20%-plus from here.

"This simple model has been the key to my success," Steve says. Recently, he revealed an asset that's finally in "buy" territory, according to his "cheap, hated, and in an uptrend" strategy. Even better, he reveals the simplest way to make the trade... Learn more here.

Steve's three "rules of thumb" can help you make great buys. But how do you know when to sell? Ben Morris and Drew McConnell share their advice on knowing when it's time to walk away, and more. Get the details here: When Do You 'Get Up From the Table'?

Not many… The market turbulence continues.