Investors Are More Scared Today Than They Were in 2009
By Steve Sjuggerud
Thursday, September 12, 2019

This is not what we'd expect to see at the end of a major bull market.

We should see euphoria – investors throwing caution to the wind, taking big (and even foolish) risks.

That's what happened as the dot-com bubble approached its peak. I saw friends getting "paper rich" with stock options. Others quit their jobs to day trade full time. It was madness.

The same thing happened with housing in the mid-2000s. It seemed like everyone I knew had gotten their real estate license. I knew plumbers and contractors who quit their jobs to flip houses.

This idea just isn't playing out today. Investors haven't thrown caution to the wind. They haven't gone "all in."

In fact, investors are downright scared...

You only have to ask the investment community to figure out that fear is rampant today.

That's exactly what the American Association of Individual Investors ("AAII") does each week. Using a simple survey, it asks a group of investors if they are bullish, bearish, or neutral on stocks over the next six months.

This late in a bull market, we'd expect investors to be excited. We'd expect them to be bullish. But as you can probably guess, that's not the case.

Right now, investors are more bearish than they've been since 2009. It's crazy – but true!

According to the AAII Sentiment Survey, investors are more scared today than they were during the most recent stock market correction... the U.S. credit downgrade in 2011... and even the depths of the financial crisis.

That's nuts for a simple reason. We're not in a major crisis today... It's quite the opposite.

After 10 years of higher stock prices, the S&P 500 remains near all-time highs. The economy continues to show signs of strength. And interest rates are incredibly low, which tends to be rocket fuel for stock prices.

Still, instead of going "all in" like we would expect, individual investors are scared. You can't make this stuff up!

This is another reason why I'm so bullish on the broader market. Stocks are a better deal than most realize. And with bonds yielding next to nothing, investors should change course and buy equities in the search for yield.

Sure, there are plenty of reasons to worry. We're in an environment where a presidential tweet can move markets 2% higher or lower. It's new and unsettling, no doubt. But you have to ask yourself...

Do these fears matter, or are they just a passing phase?

To me, every doubt out there today is a short-term worry, not a long-term concern. And when you look at the big picture, there are plenty of reasons to be excited.

That's why I believe you must own stocks today. Most investors don't agree. They're at 2009 levels of fear. But that's creating an opportunity, my friend... Don't miss it.

"The financial media has been eating this story up," Steve says. "But what you probably don't realize is that they've got it all wrong." A recent major event sent investors into a panic... but Steve still sees opportunity ahead. Get the full story right here.

"The Melt Up is underway," Brett Eversole writes. "And that, more than anything, is what should drive your investment decisions." Investors rarely need to reinvent the wheel when it comes to investing. There's an easier way to take advantage of the upside ahead... Learn more here.

Longtime readers know why Stansberry Research founder Porter Stansberry loves property and casualty (P&C) insurance. You see, insurance customers pay their premiums upfront, and it could be years before they ever file a claim. A good insurance company not only collects more in premiums than it has to pay out… but also invests the money it holds, called “float.” Take a look at today’s example…

Alleghany (Y) is the $11 billion parent of three insurance and reinsurance subsidiaries, in addition to several smaller companies. In the most recent quarter, Alleghany made a $115 million profit selling insurance… and $143 million in investment income on its float. Both those figures are up double digits compared to the same period last year.

Shares of Alleghany are up roughly 80% over the past five years, and they recently hit a new all-time high. Strong, stable insurers can earn big money. And Alleghany’s gains show why Porter calls P&C insurance the “world’s greatest business“… 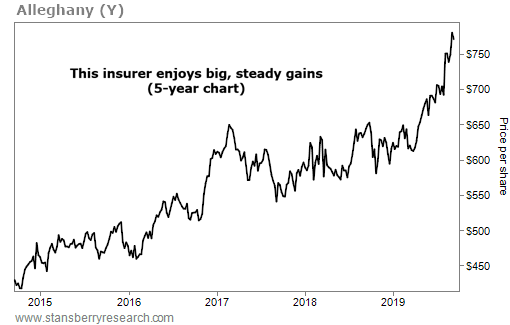