Money Flows to Where It's Treated Best â and That's the U.S.
By Steve Sjuggerud
Thursday, August 1, 2019

They involve millions of people making independent decisions. Each person has different motivations and incentives... And that leads to a system that is inherently messy. It can be difficult to read, and even harder to predict.

You can simplify the complex system into an easy-to-understand idea, though.

You see, motivations and incentives might be different for each person. But broadly, they're the same: to make the most money possible, with the least risk.

When you look at the world through that lens, you see an overarching truth that explains why things happen...

Money flows to where it's treated best.

If an investment offers a higher return than other alternatives, money flows there. Prices go up, and future returns go down. Eventually, the opportunity disappears, and money will flow somewhere else.

This cycle happens over and over again, throughout the world. And right now, this simple idea explains why the U.S. is the obvious place for global assets to flow...

The situation that's causing this might be the craziest thing happening in the financial world right now. But everyone's acting like it's normal.

That's right... Instead of earning interest on the money you lend the government, you pay interest.

Well, that's the case in Germany, Japan, and Switzerland, just to name a few places. Take a look...

Paying the government to hold your money makes no sense. These major governments offer safety and security. They won't be going bankrupt anytime soon. But is that security worth paying for?

The answer becomes obvious when you consider the U.S., which pays north of 2% on 10-year bonds.

Who would be crazy enough to lend money to Japan at a loss when you could earn 2% per year from the U.S.?

Let me ask it another way... Is your money treated better in Japan or in the U.S.?

Again, this is obvious. U.S. government bonds treat money better than the government bonds in Japan, Germany, or Switzerland. And that should cause money to flow out of those bonds and into the U.S.

Let's take it a step further, though.

The U.S. is the best option here... But it's the best bad option. Earning a 2% return isn't much incentive to lock up your cash long-term. It only looks good compared with the negative returns in places like Germany and Switzerland.

The better option, of course, is taking a bit more risk in the U.S. stock market. And that's the thing I expect a lot of global investors will realize in the months ahead.

The global situation in government bonds is crazy. Eventually, folks are going to wake up... And then, that money will flow where it's treated best... the U.S. And they won't stop at government bonds.

Investors around the world will show up for higher government bond rates and stick around for the booming Melt Up that's underway. They'll get a taste of the huge returns we've seen this year and load up on U.S. stocks.

This is the kind of virtuous cycle that can drive the Melt Up to stratospheric heights. And it's why I continue to recommend having your money invested in U.S. stocks now.

Steve says more gains in stocks are likely this year – and a recent event is one more reason to be bullish. This rare occurrence has led to double-digit gains on average... And it has a perfect track record. Learn more here: One More Reason the Melt Up Isn't Over Yet.

"You can't create wealth without savings," Dr. David Eifrig writes. "And without investing those savings, you can't retire comfortably." Now is the time to be bullish and buy... Read Doc's thoughts on the simplest way to start building your wealth right here.

Today’s chart tells us the economy is still going strong…

As longtime readers know, we use different sectors as “real world” economic gauges. When consumers are spending freely and businesses are shipping freight, it tells us that money is flowing around the economy. And when manufacturers are thriving, it shows that things are going well along intricate supply chains. Take a look at today’s example…

Carlisle (CSL) is an $8 billion maker of specialized products, including commercial roofing materials and wiring equipment. Its customers are in industries such as construction, aerospace, defense, agriculture, and medicine. So when Carlisle is making parts and equipment, it’s a good sign for the economy. The company’s sales hit a record $1.3 billion in the most recent quarter – a 6.4% increase year over year.

CSL shares are up more than 75% over the past five years, and they just hit a new all-time high. When a wide range of companies are rushing to buy Carlisle’s products, that’s a great sign for a broad swath of the economy… 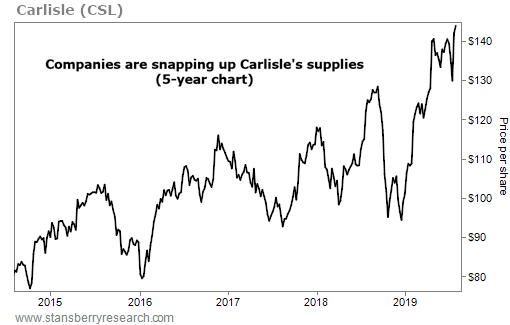