Investing in a small industry backed by the Chinese government is a recipe for huge returns.

That's what's happening with China's biotechnology sector right now. As I explained yesterday, China has targeted this industry for 116-fold (or "116X") growth in the coming years...

With China's stunning track record, investors stand to make huge triple-digit gains as this unfolds. However, I want to see more than just the backing of a sometimes unpredictable government.

So, before I share the best way to profit – here are nine more reasons why I believe investing in Chinese biotech stocks will be one of the best wealth-building opportunities of the next 20 years...

Catalyst No. 1: China's Version of the FDA

The National Medical Products Administration of China ("NMPA"), that country's version of the FDA that approves drugs, medical devices, and cosmetics, has transformed itself. It's now on par with its peers in the U.S. and Europe. That opens the door for the rest of the world to take Chinese biotech seriously – and for approved drugs in China to quickly spread.

China's massive population of nearly 1.4 billion people unfortunately means greater numbers of people who are sick. Twenty percent of the world lives in China, but it has 30% of all cancer patients, so the government is funding massive research into cancer treatments. China's population is also aging. Given the huge need for drugs over the next decade, simple economic theory points to a big boom in Chinese biotech.

The increasing use of artificial intelligence ("AI") in health care will lead to medical breakthroughs. With more access to gene-sequencing data, AI computers will be able to create drugs faster. China could be the best positioned country in the world because cutting-edge AI technology feeds off data, and China has vast amounts of health information on its citizens with its looser privacy laws.

Local cities and territories in China are trying to attract biotech firms. Think about the wealth that Silicon Valley created for surrounding areas in the U.S... It's no wonder cities are already throwing out big incentives to Chinese biotech firms to set up shop in their area.

Catalyst No. 5: Diversifying the Economy

Beijing has said it wants the pharma and biotech industries to lead China's growth in the future. By depending less on export-driven manufacturing, the country should be able to achieve a bigger economic boom domestically.

More American-educated Chinese are making their way back home. China is also dangling carrots to attract the world's top scientists through its Thousand Talents Program, which offers full professorships and other prestigious positions.

Gene editing is one of my favorite long-term investing themes within the future of medicine. Scientists are working toward curing diseases the same way you or I would fix a typo while writing up an e-mail. China had at least nine gene-editing studies taking place as of the end of 2018.

Catalyst No. 8: The Drug Trade

For many years, Chinese companies would license drugs from their large Western counterparts to sell in China. That is quickly changing. Chinese biotech firms are starting to license their drugs to U.S.-based companies to sell outside of China.

Catalyst No. 9: Just the Beginning

China's biotech companies used to be unable to list on a major Chinese stock exchange unless they were making profits. That rule has changed thanks to China's new tech-focused stock exchange, allowing capital to flow into Chinese biotechs. (Steve Sjuggerud has written about this idea at length.)

This shift is happening. The important question is how we'll take advantage of it as investors...

One of our favorite strategies in my Early Stage Investor service is what we call our "buy a basket" strategy, which is like building our own exchange-traded fund ("ETF"). This is a must for the Chinese biotech sector.

As you know, an ETF is a diversified investment fund that trades like a stock. Most hold dozens or hundreds of different companies. So they can lower your risk by giving you diversified exposure to a sector or country.

However, because ETFs typically hold so many stocks, an ETF buyer is virtually guaranteed to end up owning a lot of average companies (and even some crappy ones). You get the bad with the good.

On the other hand, if you want to profit from a big business or technological innovation, you can try to buy one single stock. That can pay off massively. But it exposes you to significant downside risk.

That's why I like taking the middle-of-the-road approach when possible... which is "buy a basket."

When I say "buy a basket," I mean pick three to six of the best companies in a sector and buy all of them.

By purchasing a handful of the best companies, you avoid owning the weak players. It's a smart way to invest in big themes that gives you an excellent balance of risk and reward.

The upside potential of the Chinese biotech sector is difficult to quantify, but you can see that it's big. If you are able to pick the few companies that create the next blockbuster drugs, the gains could be 50X your original investment.

Here's another way to grasp some of the upside potential. Amgen has a $107 billion market cap and did $23.7 billion in sales in 2018. China's rising biotech companies could generate similar sales in the next decade. We can buy these stocks when they are valued at $2 billion-$4 billion.

The basket approach has worked well in the past with biotech stocks, too. From the mid-1990s through the high in 2015, the Nasdaq Biotech Index was up 28-fold.

The Chinese government wants to dominate biotechnology and health care over the coming decades. My suggestion is to take it at its word... and own a basket of the best Chinese biotech stocks. It's one of the top "early stage" opportunities around.

Editor's note: Matt has multiple 10X opportunities on his radar. They include leading players in biotech, 5G, cannabis, and more... And we've made a deal with our affiliate, InvestorPlace, so you can learn exactly what he looks for – step by step. On Wednesday, July 31, he'll join us for one night only to share his strategy... Plus, you'll learn the name of his favorite stock recommendation right now. Get the details here.

China is finally giving its up-and-coming tech and biotech companies their chance... The country's "New Nasdaq" stock exchange kicked off with a bang on Monday. And that means these kinds of companies can go public for the first time ever. Get the full story here.

"Chinese stocks are currently offering the best value I've seen in my career," Steve writes. Most investors are still overlooking the opportunity in China – and that means now is a great time to buy. Learn more here: The Best Deal I've Ever Seen.

Today, we’re checking in on one of our “real world” economic indicators…

Longtime DailyWealth readers know we track several companies and sectors to get a feel for the economy’s health. We’ve covered this theme with industries like electronics and swimming pools. When these businesses succeed, it’s usually because people have a little extra cash to spend. Today’s company is no different…

Delta Air Lines (DAL) is one of the top airlines in the United States. It serves nearly 200 million people per year across 52 countries. When the economy is booming, people take more vacations. And it shows in Delta’s results… In the most recent quarter, the company reported sales of $12.5 billion, a new record high.

As you can see in today’s chart, DAL shares are trending higher. The stock is up more than 60% over the past three years, and it recently hit a new all-time high. As people spend more on travel, Delta should continue to thrive… 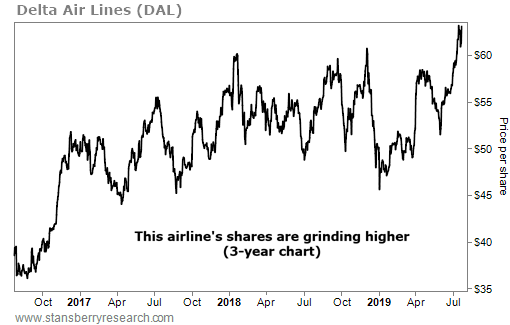