Why the World's Largest Company Should Keep Soaring
By Chris Igou
Tuesday, October 22, 2019

Not only is its stock up almost 55% in 2019, but as I write, the consumer-electronics giant has reclaimed its top spot as the most valuable company in the world.

It has had a stellar run this year. And importantly, the massive move drove shares to a new all-time high.

Most investors would view that as a bad thing. New highs tend to make folks feel like they missed it... like the biggest gains are behind them. But with Apple, that's simply not the case.

History says the rally we've seen should continue. In fact, a 25% gain is possible over the next year.

A near-55% rally in less than a year is impressive... especially for the world's most valuable business. And it might seem counterintuitive to buy after such a big move. But that gut feeling is wrong.

The simple fact is that new highs often lead to newer and higher highs. We want to follow the trend... And new highs typically show that the trend is strong.

That's exactly the case here. We've seen 18 other new 52-week highs for Apple since 1990. And 72% of the time, those new highs led to profits over the next year. 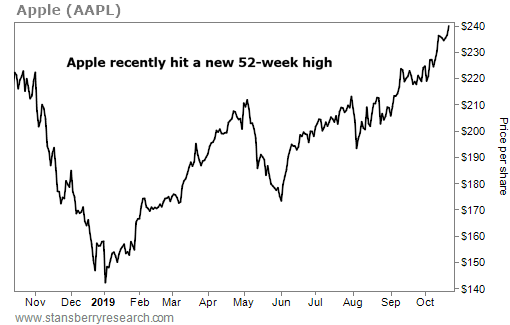 This stock has had a massive rally since December. And if you're one of Apple's investors, history says you can expect the uptrend to continue.

Since 1990, buying shares of Apple after similar moves has been a good idea. It would have even outperformed a simple buy-and-hold strategy for the past three decades. Take a look...

Simply buying and holding shares of Apple has been an incredible bet... returning 19% a year since 1990. But by waiting to buy after new 52-week highs, you can do even better.

Similar instances led to 12% gains in six months and a solid 25% gain over the next year. Those are huge returns and solid outperformance. And it means owning Apple today is a smart idea.

Apple is back at the top. It's back to being the world's largest company by market capitalization. And history says it will likely get even larger over the next year.

So if you're looking for a high-quality blue chip to add to your portfolio, this is one to consider... History says now is a great time to act.

"While we might be late in this bull market, there's no reason to expect a crash today," C. Scott Garliss says. He recently explained why the global stock boom isn't over yet, thanks to central banks... Learn more here.

"If you don't invest in medicine... biotechnology... or drugmakers... you're missing out on a massive part of the economy," Dave Lashmet writes. Many investors gain exposure to the sector by buying the big blue-chip companies... but Dave says there's another way to make huge gains. Get the details right here.

Market Notes
LOW PRICES ARE STILL AN EDGE FOR THIS RETAILER

Today, we’re looking at a company surviving the “retail apocalypse”…

While online shopping has hurt many traditional retailers, some have survived the carnage. In fact, many companies that have carved out specialties are thriving. Today, we’re looking at a business providing everyday necessities at low prices…

We’re talking about Dollar General (DG). The $42 billion discount retailer specializes in cheap groceries and other household goods. It boasts roughly 16,000 stores in 44 states, with many of those in small towns where other chains don’t reach. And it plans to expand to 46 states by next year. Thanks to the winning combination of convenience and low prices, it can successfully compete with online options… In the most recent quarter, Dollar General reported sales of $7 billion, up 8.4% from the same quarter last year.

As you can see in today’s chart, DG shares are in a steady uptrend. The stock is up more than 50% so far in 2019, and it recently hit a fresh all-time high. As long as people need everyday goods at big discounts, DG should continue higher… 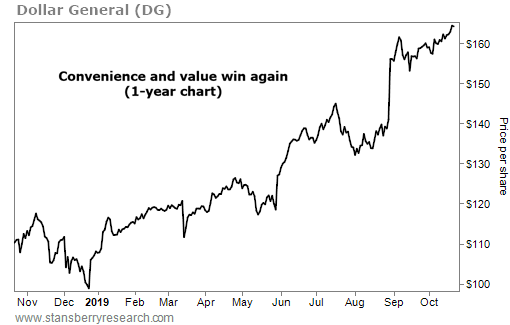