Why This 'Sure Failure' Ended Up a Success
By Steve Sjuggerud
Thursday, October 31, 2019

Before my True Wealth newsletter even got started, I was told over and over that it would be a failure.

"I don't get it," the newsletter experts said. "What's the hook?"

I told them it was simple... The "hook" is that you don't have to take big risks to consistently make big money.

The worst response I got was in my early days in the newsletter business. My publisher had hired a high-priced consultant. He punched some numbers into his "always right" computer program and said my newsletter had a 100% chance of failure. He strongly urged my publisher not to go forward with it.

Today, True Wealth is one of the most successful newsletters in America, with roughly a hundred thousand readers and an 18-year history of delivering exactly what we've promised... finding investments that don't require big risks to return big money.

The story of True Wealth goes back further than its 2001 launch, though...

Right out of college, I was a broker for a year or two at a firm specializing in global stocks and bonds. One thing that struck me was that most of my clients were big readers of investment newsletters... Mark Skousen's, Adrian Day's, and the Oxford Club's, among others.

That company also ran a small ($50 million) fund. And at 24 years old, I became that fund's vice president.

Running a global mutual fund was my dream job at the time. Unfortunately, the company knew it... So it paid me a tiny annual salary of $23,500!

It was a big pay cut from what I used to make as a broker. But I would have been stupid not to take that job. Because the fund was small, I wore every hat at different times... research, trading, bookkeeping, SEC compliance, accounting, writing the quarterly reports... It was a great experience.

After a year, though, when they offered me a small raise to $27,000, I would have been stupid to stay... I'd started studying for my Ph.D. while working for the fund. Between tuition and rent, my net worth was shrinking every day. So I quit.

I kept thinking about those investment newsletters, though.

My boss at the brokerage firm was kind enough to get me in touch with the CEO and publisher of the Oxford Club. And in just a few weeks, I moved and was writing a newsletter. By 1998, two years later, I was writing the Oxford Club letter, with 45,000 readers.

My real dream had come true... I was helping investors. And three years later, I landed an even better opportunity, working with Porter at Stansberry Research. He gave me a blank slate, telling me to write the newsletter I wanted to write.

Of course, we heard plenty from the naysayers back then...

The consultants thought my style would be a flop. They said I was too conservative an investor for the newsletter business. And I never recommended what was popular in the investment world.

To make matters worse, 2001 was a terrible time to get started. The Nasdaq had fallen from 5,000 to 2,000. Did the world really need another investment letter?

Apparently, it did... Against all odds, we made it. And I've been writing ever since – everything from True Wealth, to True Wealth Systems, to my special-situation services on China and commodities... And, of course, DailyWealth.

People still wonder why my newsletters work. I think the "secret" is simply that I'm passionate about what I'm doing... helping people grow their money safely.

Everyone thought you had to write about the hot ideas – the investments that got everyone excited – to sell newsletters. I wanted to show people something different. I knew you could make a lot of money, with much less risk, simply by going against the crowd.

As a DailyWealth reader, you know this, too... And that puts you way ahead of most investors out there.

I'm just thankful to be doing what I love to do. It amazes me that I'm able to reach far more folks today, doing this, than I did with the Oxford Club letter when I wrote it. For a guy who writes simple newsletters with no hot "hook," that's an achievement.

P.S. This week, we're celebrating the 20th anniversary of Stansberry Research... So I recently sat down with some of the other folks who helped build this company – like my friend Porter Stansberry – to give readers a "behind the scenes" look at how we got started. We shared some great memories. And we also made two big announcements about what's next...

One of them is three years and $5 million in the making. To learn all about it, check out our video here.

"Porter and I have changed a lot over the years," Steve says. "But our vision for Stansberry Research hasn't changed." Read more about Steve's reflections on getting started at Stansberry here: Why I Turned My Back on Wall Street 20 Years Ago.

"Is following your dream worth a shot?" Steve asks. "Can you turn that into a way to make money?" Learn more about an unconventional – yet rewarding – way to follow your passions right here.

Regular readers know that following game-changing technology trends typically leads to profits. That’s certainly true for semiconductors… the tiny chips that power our world today. From smartphones, to televisions, to even refrigerators, semiconductors are a central part of our everyday lives. And that’s good news for today’s company…

Taiwan Semiconductor Manufacturing (TSM) is a $265 billion giant in the semiconductor business. It’s the world’s largest chip foundry of its kind, and recently scored orders to make artificial intelligence processors for multiple companies, including tech giants Nvidia (NVDA) and Qualcomm (QCOM). It also provides 7-nanometer chips for the coming 5G revolution. The company reported strong third-quarter results earlier this month, with revenue up 10.7% year over year to $9.4 billion.

As you can see, TSM shares have soared. They’re up nearly 185% including dividends over the past five years. And as semiconductors continue to show up in our everyday items, that trend should keep going… 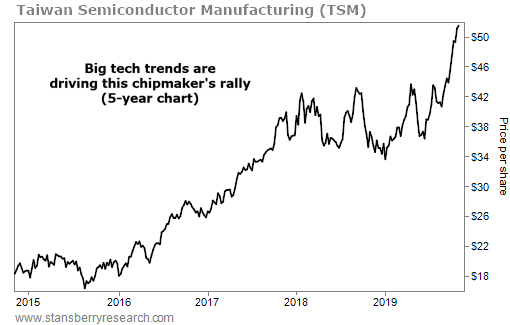