The Hong Kong Protests Will Give Way to Opportunity
By Brian Tycangco
Thursday, August 15, 2019

I never thought I'd be happy to leave Hong Kong so soon.

Flying into Chek Lap Kok International Airport last week, I was relieved that I was only there for a short layover before my connecting flight to Manila.

The airport had been swamped with hundreds of black-clad protesters the weekend before. More than 100 flights were canceled. So I was more than a little anxious.

I lucked out, though.

Our plane arrived a full hour early. There wasn't a protester in sight at the main terminal. And all flights leaving later in the day appeared to be on schedule.

This weekend, travelers to Hong Kong weren't so lucky...

A sea of protesters staged a sit-in at the arrival section. This is where I would normally order some roasted duck and pork dumplings at the Crystal Jade restaurant.

The sit-in started last Thursday. And the number of protesters swelled even more on Monday, forcing the Hong Kong Airport Authority to cancel all departures starting late afternoon. It's an unprecedented level of disruption for an airport that typically handles more than 1,000 flights a day.

These protests are starting to get some serious airtime in Western news outlets. Many countries, including Canada and Australia, have already issued travel warnings to the city.

From the outside, it certainly looks bad. But growing up in Asia's politically charged economies, I've seen much worse.

While these protests are unprecedented, Hong Kong is acquainted with political turmoil. And the results of these scuffles might surprise you...

Similar (though smaller) anti-government protests swept Hong Kong in late 2014. As a result, the region faced a severe drop in tourism – particularly from the mainland – for most of 2015.

Chinese mainlanders account for 80% of Hong Kong tourist arrivals today. So as you might imagine, that decline in 2015 viciously slammed the city's retail industry. Retail sales fell nearly 4% that year. It was a disaster for an economy that prided itself in having one of the most vibrant retail markets in the world.

It took a full year before Hong Kong's tourism industry and retail market recovered. But by the time the dust settled at the end of 2015, the crisis had opened up one of the best buying opportunities I've seen...

For instance, shares of the world's leading gold jewelry retailer, Chow Tai Fook, went on to double in value over the next 18 months.

There's no telling yet where the current political situation in Hong Kong will end up. It could get worse before it gets better... Or it could suddenly dissipate if the current administration is able to appease the protesters.

For now, it looks like tensions will keep rising. Protests have shut down the airport twice already, screwing up travel for tens of thousands of tourists and denting Hong Kong's once-pristine image in the international community.

But no matter what happens in the short term, I see a similar bargain-hunting opportunity opening up in Hong Kong's best and brightest companies.

The protests are scary and disruptive right now. But last time around, they created a major opportunity. And I expect that to be the case again this time.

It's best to be patient now as protests continue. Things will settle down. And when they do, you'll want to be in this market in the years to come.

"China is developing a potent antidote to Trump's trade war," Brian writes. "Despite trade tensions, China's antidote could cause billions of dollars to flow into Chinese stocks." Get the full story on this powerful development right here.

"I may have been the first person to really pound the table about the huge upside potential here," Steve says. "Importantly, though, I believe this is just the beginning." Learn more about a massive event in China with huge potential ahead for investors right here.

Market Notes
THIS CELLPHONE-TOWER PROVIDER IS POSITIONED TO SOAR

Pew Research estimates that 96% of Americans own a cellphone, with 81% of those being smartphones. And this trend is only set to keep growing… Especially as 5G service rolls out across the nation, allowing smartphone users to access their data 100 times faster. Today’s company is positioned to profit from this revolution…

Crown Castle (CCI) is the largest provider of communication infrastructure in the U.S. This company partners with wireless carriers, tech companies, broadband providers, and city governments – all for good reason. With its towers, antennas, and fiber, it provides cellphone service across the country… And it’s supporting the coming 5G revolution. The company recently reported stellar second-quarter earnings, with net income up 37% year over year… And it raised its 2019 outlook.

You can see the trend in CCI shares over the long term. The stock is up about 120% over the past five years, with dividends included. And as the 5G revolution rolls out, that trend should continue… 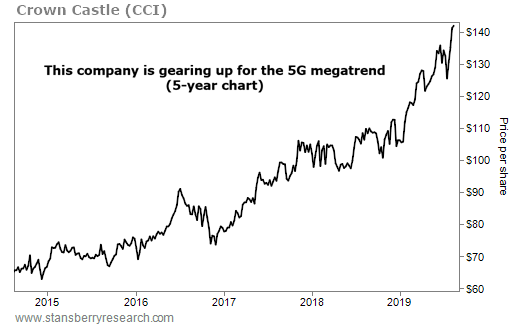