This Is China's Antidote to Trump's Trade-War Venom
By Brian Tycangco
Monday, August 12, 2019

China is developing a potent antidote to Trump's trade war.

More importantly, despite trade tensions, China's antidote could cause billions of dollars to flow into Chinese stocks.

President Trump campaigned on a bold promise to drastically cut the U.S. trade deficit with China, which hit a record of almost $420 billion last year.

He's already slapped tariffs on $250 billion worth of Chinese goods and warned U.S. companies, including Google, against selling "sensitive" technology to China. But nothing seems to work. China has been slow to give in to Trump's demands.

So on August 1, Trump announced that the U.S. would slap 10% tariffs on another $300 billion worth of Chinese goods, beginning September 1.

This new round of tariffs threatens holiday orders, which traditionally kick into high gear around this time of year. So the timing of these new tariffs isn't coincidental. Trump wants to inflict maximum pain on China's economy.

The thing is, China is no longer a manufacturing-led economy. That ship sailed a long time ago.

That's why these tariffs shouldn't hurt China as much as you'd expect. Chinese consumers aren't going to stop buying anytime soon. They're incredibly optimistic today – for one reason especially.

This brings me to China's antidote to the trade war...

I'm talking about China's stock market. It's transforming into one of the greatest wealth-creation machines in history. And it will help push China's consumer-driven economy forward.

As my colleague Steve Sjuggerud has explained before in DailyWealth, we'll see as much as $2.2 trillion flow into Chinese stocks over the next 10 years. That's all thanks to MSCI's inclusion of Chinese-traded stocks in its global indexes.

Moreover, because China's vast pension funds are able to invest up to 40% of their assets in A-shares, another $1 trillion is expected to flow into Chinese stocks by 2025.

People in China have good reason to be optimistic. In fact, consumer confidence among Chinese has been rising almost nonstop since Beijing announced the pension fund investment program in March 2016. Take a look... 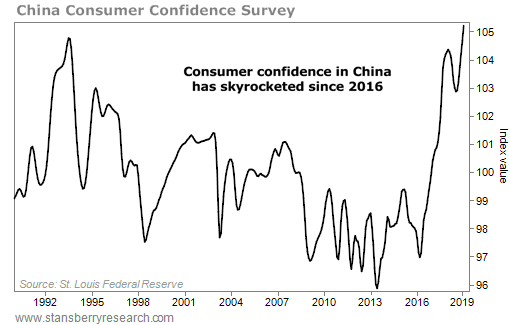 The "New Nasdaq" exchange is the latest in this string of market events helping to boost confidence among Chinese consumers...

And thanks to rules that protect smaller investors, interest in this market has been phenomenal. Leading up to the first day of trading, demand for IPOs exceeded the available shares by an average of 1,700 times.

That's convincing more of China's most promising companies to list locally instead of abroad. Indeed, one of the next IPOs slated for the STAR Market – Shenzhen Chipscreen Biosciences – reported excess demand of 3,000 times.

This means literally tens of billions of investable dollars are just waiting in the wings, ready to flow into Chinese stocks. If that doesn't speak to confidence, I don't know what does.

Sure, tariffs will hurt Chinese exports to the U.S. Anyone with common sense will be able to tell you that.

But it would also be a mistake to ignore the incredible wealth-creation potential of China's economy... and its stock market.

P.S. China's "New Nasdaq" is opening up huge opportunities for investors... But you don't have to invest directly in the STAR Market mania. This story is creating new ways to profit from some of China's biggest, most established tech giants. And even the trade war can't stop it. To find out what it could mean for you, check out Steve's presentation right here.

"It's the most exciting thing to happen to China's stock markets in more than a decade," Brian writes. "This situation is inherently different – and far more lucrative – than previous China stock bubbles." Get the full story on a new incredible opportunity in China – and why you should ignore the recent negative press – right here.

"Who has the best negotiating position in the trade war?" Steve asks. "If you ask most Americans, they'd say Trump. But they'd be dead wrong..." Get Steve's take on the trade war outcome here: Why Trump Will Do Anything to End the Trade War.