This 'Coffee Can' Trick Could Help You Get Rich in Stocks
By Matt McCall
Wednesday, August 7, 2019

Now that our days are filled with Starbucks trips and single-serve "K-Cups," it's easy to forget that large coffee cans were once fixtures in millions of American homes.

It might sound funny, especially after the high-tech-focused essays I've shared with you over the past couple weeks... but coffee cans can teach us an extremely powerful investment lesson. They're behind an enlightened way of thinking that could help you get rich in the kinds of stocks I cover in my research services.

Specifically, we employ a "venture capitalist" mindset, where "coffee-can knowledge" is especially important.

Here's what I'm talking about...

When it comes to extreme wealth creation, you can't do much better than simply owning a small company that grows large. An early investor in Microsoft (MSFT) could have made more than 9,000% during the 1990s. That type of gain turns every $5,000 invested into $450,000.

It only takes one of these big hits to make a huge amount of money in early stage companies – which is why the venture capitalist mindset is so important.

Venture capitalists are the early backers of startup companies. They are the grand-slam home-run hitters of the investment world. They don't look to make 300% on their investments – they look to make 3,000%... or even 30,000%. Make just one great venture-capital investment, and you'll probably never have to worry about money again.

"Coffee-can knowledge" is critical to this kind of success. It is truly one of the main differences between the rich and the poor.

The coffee-can story is most famously recounted by Robert Kirby, an investment manager from days past.

Kirby wrote, "The Coffee Can Portfolio concept harkens back to the Old West, when people put their valuable possessions in a coffee can and kept it under the mattress."

The coffee-can method of portfolio management is simple: You buy high-quality businesses with promising futures.

But instead of doing what many folks do – which is check on share prices every day, fret constantly about the portfolio's short-term performance, and trade in and out of positions – you do nothing but sit on the portfolio for years.

You stuff your shares in a figurative coffee can, put the can in the cupboard, and ignore it for long stretches of time.

The coffee-can idea came to Kirby while he was working at an investment firm. He had a client whose husband, a lawyer, had died. The client inherited the stock portfolio, which she brought to Kirby. Kirby writes:

I was amused to find that he had been secretly piggybacking our recommendations for his wife's portfolio. Then I looked at the size of the estate. I was also shocked. The husband had applied a small twist of his own to our advice: He paid no attention whatsoever to the sale recommendations. He simply put about $5,000 in every purchase recommendation. Then he would toss the certificate in his safe-deposit box and forget it.

By ignoring any "sell" advice and socking the shares away, the husband had allowed a kind of wealth-creation magic to happen...

Sure, he had some losers in the portfolio, worth less than $2,000. But he had several large holdings worth more than $100,000 each. And get this: there was also one gigantic holding worth more than $800,000. That massive return was born from a small investment in Haloid, which became a large amount of Xerox shares.

This utterly inactive portfolio approach stands in stark contrast to how most individual investors manage their money. They jump in and out of stocks, take profits too early, get too impatient, worry over meaningless day-to-day stock movements, and check price quotes all day.

Most folks would be better off managing their stocks like the lawyer from Kirby's story: Buy good, promising companies and sit on them.

In my investing services, we take a venture capital-style approach... We buy small, promising businesses with the potential to massively increase in value.

However, those massive increases in value don't happen overnight.

That's why sitting tight with the coffee-can approach in mind is often the most useful thing we can do on any given day. I came to this understanding the hard way...

In 2003, at the ripe old age of 27, I started my first investment firm, Penn Financial. I couldn't have done it without my first client, a former consultant at my prior company who had told me he would be my first client if I ever went out on my own. I took the gamble and have never looked back.

With only a few clients, every investment was that much more important. One of the first stocks I ever bought for my Penn Financial clients was a little-known, surgical-robotics company called Intuitive Surgical (ISRG). At the time, in early 2004, the stock traded around $15 per share ($5 split adjusted).

In a few short weeks, it rallied to around $20 (pre-split), and the position was quickly up more than 30%. Annualized out, we were looking at a big, triple-digit gain.

Even though I believed the company was in its infancy, I felt the quick 30% was too much money to risk losing, and I decided to bank the profit and make my clients happy. And yes, they were very happy... at the time.

I wish I had utilized the coffee-can approach in 2004. The important thing is, it is never too late...

Odds are high that we'll find more Intuitive Surgicals in the coming years. We're in the early stages of several game-changing trends, including 5G, self-driving cars, the Internet of Things, and more.

We'll see potentially dozens of companies on the rise... small companies that turn into big winners over time. And that's why the coffee-can approach will be an essential part of your investing success in the coming years.

Editor's note: Matt has a gift for finding the small, innovative companies that will emerge as industry leaders. Now, he's sharing a video giving away some of his favorite stock ideas for free... along with an in-depth walkthrough of his "10X" strategy. Here's the catch – this video will only be up for a short time. So take a few minutes today to watch it right here.

"Billion-dollar brands will become worthless virtually overnight," Matt writes. "New companies will spring up in their place and make their shareholders extremely wealthy." That's why he's tracking several massive market disruptors in a critical American industry... And they might surprise you. Learn more here.

"The next trillion-dollar companies – the next Amazon, the next Google, and others – are being hatched in research facilities and garages around the world," Matt writes. He says big tech innovations are about to transform our smartphones forever... And they're also giving us a massive wealth-building opportunity. Get the full story here.

Market Notes
STEADY GAINS FROM BOXING UP OUR EXTRA STUFF

In DailyWealth, we love finding big, secular trends to invest in. For example, retired Baby Boomers are downsizing their homes, while millennials flock to crowded cities. This means folks from every generation often just have too much stuff… And nearly 10% of American households turn to this company or its competitors…

Extra Space Storage (EXR) is America’s second-largest self-storage company. Its 1,752 warehouses offer a whopping 134 million square feet of rentable space. And folks are filling up that space… The company enjoys roughly 94% occupancy of its established stores, and sales reached $323.6 million in the most recent quarter – a 9% jump year over year.

EXR shares are up more than 45% over the past two years, and they just hit a new all-time high. As long as Americans continue to keep things that they can’t fit at home, you can bet on the self-storage boom… 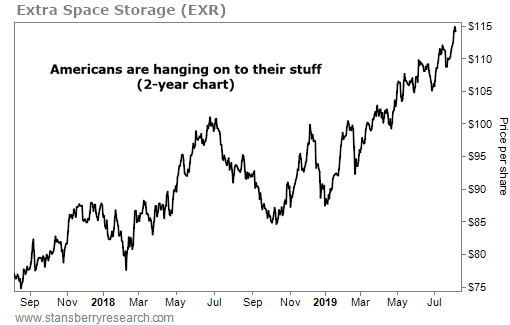