A 'Perfect Storm' Is Coming for This Dominant Industry
By Matt McCall
Friday, August 2, 2019

"Our industry is going to change more deeply in the coming 10 years than in the 100 years before."

Matthias Müller, then-CEO of German automaker Volkswagen, spoke those words in May 2017.

Just behind Toyota Motor (TM), Volkswagen is the world's second-largest automaker. And its industry is facing one of the most powerful and most varied set of disruptions in the history of capitalism.

Huge, seemingly dominant companies will go out of business very quickly during this time of epic change. Longstanding billion-dollar brands will become worthless virtually overnight. New companies will spring up in their place and make their shareholders extremely wealthy.

If you understand what's about to happen, you could make a tremendous amount of money in a short time. What's coming is going to be that powerful and that fast.

Think of the auto industry like a large dining table that took decades and hundreds of billions of dollars to set up... The tablecloth is about to get yanked out.

Let me explain the "perfect storm" of change coming to one of the biggest industries on the planet. While this perfect storm is terrifying to some, I hope you'll see it as a huge opportunity.

If the old auto industry is about to get demolished, here are the "four horsemen" of its apocalypse – the four major disruptive changes hitting the industry...

The first disruptive change is the decline of the internal combustion engine.

The 20th century was the age of oil... thanks in large part to the internal combustion engine. Some of the world's largest industries were created to extract fossil fuels, refine them, and burn them while getting from point A to point B.

But over the past decade, electric-vehicle ("EV") technology has advanced by leaps and bounds. Companies like Tesla (TSLA) and Toyota have invested billions of dollars in the pursuit of increasing the range and reliability of EVs.

In addition to technological improvements, EVs have governments on their side...

Thanks to environmental concerns, governments in China and Europe are moving to phase out internal combustion engines and phase in EVs. Bloomberg estimates that at least 50% of cars sold by 2040 will be electric.

What's coming is a profound shift in how the automotive industry works...

I don't believe we'll see the "death of oil" any time in the next decade. But we will see a continuing shift toward EVs. So instead of the best oil companies, I'd much rather own the best companies involved in EV battery technology and materials. That's where the biggest growth is happening.

The rise of ride-sharing services is the second disruptive change...

Thanks to ride-sharing services from companies like Uber Technologies (UBER) and Lyft (LYFT), the concept of "car ownership" has radically changed in the minds of many consumers.

Instead of going through all the expense and time associated with owning a car, many people – especially those younger than 40 – would rather just call an Uber to get where they need to go.

We're talking tens of millions of consumers that don't care about American "car culture." This is a radical shift from days past. And we're already seeing the impact on sales...

U.S. total vehicle sales rebounded strongly coming out of the Great Recession, exceeding 18 million per month in mid-2015. But except for a couple of spikes since then, sales have largely plateaued and even trended down.

Third, the rise of autonomous vehicles will disrupt the auto industry in the years ahead.

Just like EV technology, autonomous-vehicle technology has grown by leaps and bounds over the past decade.

Self-driving cars have gone from a science-fiction fantasy to actually operating in the real world. Waymo – owned by Google's parent company Alphabet (GOOGL) – is successfully testing self-driving taxis in Phoenix, Arizona. And Tesla (TSLA) has invested tremendous amounts of money into making its vehicles partially autonomous.

The final disruptive change for the auto industry is the growing importance of "tech" in cars.

From entertainment systems to navigational systems to voice-activated controls to autonomous-driving features, the role that hi-tech software plays in cars is growing every year.

For example, Alphabet leads the world in self-driving car patents. The technology behind digital assistants – which are operated with voice commands – is dominated by Big Tech companies like Amazon (AMZN) and Google.

These tech giants will wield increasing amounts of power in the transportation industry.

For generations, the auto industry didn't change much...

Carmakers sold cars with internal combustion engines. Ride-sharing services like Uber didn't exist. And the idea of a self-driving car was science fiction.

Today, most drivers fill up their cars the same way they did a century ago. The photo below is not much different than what you would see at your local gas station today... 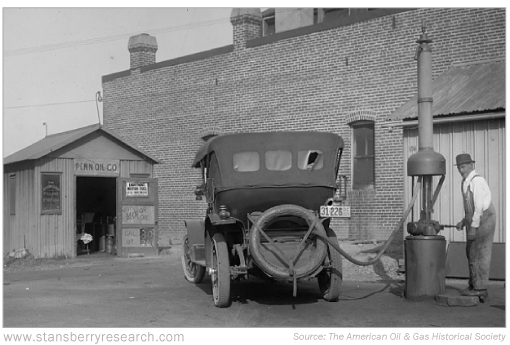 But everything related to the automotive industry is about to change radically...

Transportation will change more in the next 10 years than it has in the past 100 years.

Thanks to extraordinary advances in technology, an epic period of transformation is coming for the trillion-dollar auto industry.

If any of today's giants are unable to navigate the coming perfect storm of change, they'll quickly go out of business.

As with any major business change, I hope you see it as a huge investment opportunity.

Editor's note: Matt just gave away seven of his favorite stock ideas – completely free. And he believes any one of them could double your money in a matter of months. It's all part of what he calls his "10X" strategy. To hear how it works – and learn the names of these potential "megatrend" stocks – watch his short video before it comes offline.

Today’s company is an international leader in health care…

Regular readers know that our colleague, Dr. David Eifrig, believes health care stocks are set to soar. According to the U.S. Office of Disease Prevention and Health Promotion, 24% of the U.S. population will be seniors by 2060. That’s 98 million people. And as they grow older, they’ll need more and more health treatments. Today’s company is rising to meet this challenge…

Medtronic (MDT) started as a medical-equipment repair shop in 1949. Today, it’s the largest medical-device company in the world. The $139 billion giant operates in more than 150 countries worldwide… But the majority of its revenue comes from the U.S. That means it’s perfectly positioned to keep providing treatments for America’s seniors. The company’s sales have risen consistently for the past five years, reaching more than $30 billion for fiscal 2019.

As you can see, the stock is climbing, too. It’s up roughly 65% over the past five years… And as Boomers age and need more medical care, that climb should continue… 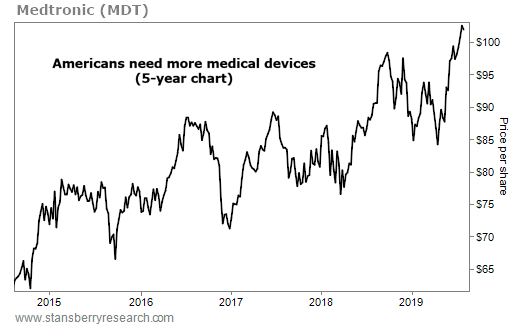