Unlocking the True Potential of This Trillion-Dollar Industry
By Matt McCall
Wednesday, July 31, 2019

By using the school's early version of the Internet, students could find out what drinks were stocked.

You probably know the nickname for this technology today. We call it the "Internet of Things" ("IoT"). That's the label we've given to the coming world of connected machines and their support systems.

Cars, homes, lighting systems, medical devices, industrial machines, oil rigs, and more... You name it, and it's going to use advanced technology to monitor itself, monitor its surroundings, and communicate via the Internet.

Although this technology has been around for more than 20 years, it has only recently advanced to the point of becoming cheap enough... reliable enough... small enough... and powerful enough to spread all over the world.

That's placing us on the doorstep of a massive technological revolution.

We're about to see an explosion in efficiency across our factories, our roads, our airports, our schools, our companies, and dozens of other key places.

You've surely heard about IoT technology. However, I'm confident you haven't heard about the most important way it will transform the world and make our lives better...

When most people think of the IoT, they think of neat consumer gadgets and tools.

For example, a connected refrigerator can monitor how much milk you have and order more from the grocery store when you get low. Another neat consumer IoT application is being able to change the temperature inside your house from your phone.

Given all the devices we use every day, it's no wonder Internet "plumber" Cisco Systems (CSCO) says 500 billion devices will be connected to the IoT by 2030. Spending on the IoT is forecasted to grow 55% and pass $1 trillion by 2022.

The IoT's consumer applications are interesting and valuable... But in my opinion, the IoT's truly huge value comes down to something I call predictive maintenance.

You've probably heard of preventive maintenance. This is regular maintenance performed on machines to keep them working. For example, a crane operator might regularly tighten the bolts on his machine or grease its gears. He has to watch its condition constantly.

On the other hand, predictive maintenance – made possible by self-monitored and connected machines – will reduce our stress, boost our productivity, and increase our profits.

Instead of asking humans to monitor machines and fix them when they break, machines will be able to monitor themselves, spot problems, and fix those problems at the "least worst" times.

This "predictive maintenance" will make us way more efficient and lower the price of everything.

To wrap your head around the gigantic money- and time-saving potential of predictive maintenance, just think back to the last time a flat tire or engine trouble left you stranded on the side of the road...

You probably spent at least an hour figuring out what went wrong and then fixing it. If it was a major problem, you simply didn't get to where you were going. If it was hot, cold, raining, or snowing, it was probably a miserable experience. If you had small children with you on the trip, it was an even bigger pain in the neck.

Now... just think if your car could have alerted you to the problem before you left the driveway... and even ordered a mechanic to come out and fix the problem.

Just think if the fix could have happened while you were cooking dinner the night before.

No changing a flat tire in the rain. No waiting on a tow truck. No missing work or appointments.

Just your car predicting the future... and changing it for the better.

This time- and money-saving dynamic – this predictive maintenance – that the IoT promises will transform dozens of major industries.

Money- and time-saving fixes will happen millions of times per day in dozens of sectors. We will fix problems before they become problems. Flying, building, driving, shipping, manufacturing, farming, and producing energy will get easier, safer, and more efficient. This will reduce costs in a big way.

I love the idea of my refrigerator doing my grocery shopping. But as a financial analyst and investor, I'm much more interested in the IoT's ability to unleash efficiency and cost savings across dozens of industries.

That's what will drive businesses around the world to spend hundreds of billions of dollars with companies that are making the IoT possible. That's what will create a big tailwind for companies like Rockwell Automation (ROK) with its factory-equipment automation, Cognex (CGNX) through its machine vision, and Nokia (NOK) with its networking equipment.

Editor's note: In the last decade, Matt has recommended more than 200 triple-digit winners in innovative sectors... plus, 16 stocks that soared tenfold or higher. Now, TONIGHT at 8 p.m. Eastern time, he's joining us to reveal what these "10X" stocks have in common. Tune in online, and you'll even learn the name and ticker symbol of a stock Matt believes could soar 1,000% or higher. Reserve your free spot here.

"Investing in industries with huge growth potential and gale-force tailwinds at their backs is how you set yourself up to make giant returns," Matt says. He's tracking several early stage tech revolutions today... but this one might surprise you. Get the details here and here.

"The age of customized, 'precision' health care is getting started," Matt writes. He says three big innovations are about to transform medicine as we know it... And they're giving us a huge wealth-building opportunity. Read more here.

Market Notes
HITTING A DOUBLE ON PAINTS AND SEALANTS

Today’s chart shows why “boring” businesses can be great investments…

When we say “boring,” we mean things like garbage collectors or air-conditioning manufacturers. While you want to own exciting, high-growth tech companies, you should also make some bets on “old reliable” businesses that don’t change over time. It isn’t a thrilling way to invest – but today’s example shows that’s not such a bad thing…

Sherwin-Williams (SHW) is a $47 billion paint manufacturer. Making paint isn’t a revolutionary business… but it’s a steady one, and it’s easy to understand. No coat of paint lasts forever, so folks always come back for more eventually. Sherwin-Williams sold $4.9 billion worth of paint, sealants, and related products in the most recent quarter – all with little to no research and development costs. And sales have risen each year for the past five years.

SHW shares have more than doubled over the same time frame… And they’ve surged since the company beat earnings expectations last week, hitting a new all-time high. It’s one of many “boring” companies that are performing well today… 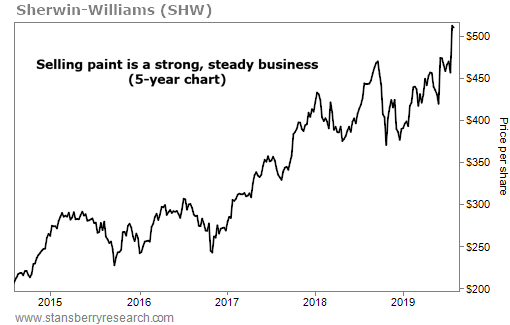