How to Profit From the Next Credit Collapse
By Mike DiBiase
Thursday, July 11, 2019

If you follow the investing world, you likely know all about Marty Fridson...

He's one of the most respected researchers and authors in the field of high-yield (or "junk") debt. Today, he is the chief investment officer at investment-advisory firm Lehmann, Livian, Fridson Advisors.

And each year, he hosts the High Yield Bond Conference in New York...

As you might expect from its name, during the two-day conference, speakers share their research and opinions on topics related to high-yield debt. The event is a great way to "take the pulse" of insiders in the bond market, while keeping up with the latest research.

That's why I made the trip in June...

Overall, the tone at the conference was surprisingly optimistic. Most of the speakers – including Fridson – don't think the junk-bond market is as dangerous as the mainstream media suggests. They don't believe the next recession and correction in the credit markets will be nearly as bad as the last one. And they don't think it'll happen within the next year.

With all due respect to Fridson and the other presenters, I don't agree.

We've been down this road before. In all the years leading up to the last financial crisis, outside of one presenter anyone at Stansberry Research can remember, neither Fridson nor any of his many presenters saw the 2008 credit collapse coming... let alone its severity.

As I noted yesterday, the dominoes are already starting to fall in corporate America.

Today, I'll share more about how you can get through a crisis – and even grow your wealth – by making smart investments in distressed bonds.

No one can argue with the facts... Corporate debt is at an all-time high. And the quality of that debt is much worse than it was before the last financial crisis.

That's why we launched our Stansberry's Credit Opportunities newsletter. And it's why every month, I work with my colleague Bill McGilton to scour the universe of U.S. corporate bonds.

We're searching for what we've called "outliers"... bonds priced far too low for their level of risk. When we're analyzing whether a bond is safe for us to recommend buying, we focus on a single important question... Can it pay us?

We only care whether a company can pay our interest and principal. That's all that matters when investing in bonds.

To figure out if a company can do that, we analyze two factors...

These can get a little technical, but stick with me. I promise, it's well worth it.

The first factor is the most important...

If the company can't afford to pay the interest on all of its debt (not just our bond), its lenders can force the company into bankruptcy. We'll never recommend a bond from a company that we believe will go bankrupt before our bond matures.

That's why we look at the company's "interest-coverage ratio."

For us, that's how many times the company's cash profits cover its interest costs. (Cash profits are the cash that a company produces from its core operations. The metric can be found in the statement of cash flows under the "net cash provided by operating activities" line.)

We use this measure because, unlike accounting earnings, cash profits can't be faked. That's because cash profits don't include any estimates that management can easily manipulate. You can't fake cash.

We like to see interest-coverage ratios of at least two times...

That tells us the company can safely afford its interest payments, with enough cushion to absorb unforeseen downturns in its business.

Next, by addressing the second factor, we can figure out whether the company will pay us our principal when it's due. If it looks like the company won't have enough cash in the bank at maturity to pay our recommended bond, we know it will need to refinance its debt with other loans to pay us. So if that's the case, we look for companies that should have no trouble finding financing when the time comes.

We don't care how we get paid, as long as the company is able to pay us.

In addition to these two factors, we also want to know our worst-case scenario... what would happen in case of a bankruptcy. So we perform a liquidation analysis for every bond.

For this, we run a simple thought experiment. We imagine that the company is forced to shut down its business at some point in the future and sell off all of its assets. We estimate what these assets would be worth in a forced sale.

The good news is... unlike stocks, bonds aren't worthless in a bankruptcy. On average, bondholders have historically recovered about $0.40 on the dollar in bankruptcies. For some of the bonds we've recommended, the amounts we estimate we'd recover in a bankruptcy are higher than the prices we paid for the bonds.

As I've explained, we'll never recommend a bond that we believe is in danger of bankruptcy before we get paid. Still, we can't guarantee that it will never happen.

Every investment comes with some level of risk. That's why we must always look for returns that are high enough to compensate us for these risks.

And it's why this strategy works even better during a credit crisis, when bond prices plummet. You see, bond prices and bond yields are inversely related. So as bond prices fall, their returns rise. The profits you make go up... while your potential losses go down. That makes them even safer investments.

The next crisis is approaching. That's when the best opportunities will appear.

The good news is, it's possible to earn huge, safe returns even before a crisis...

From time to time, severe inefficiencies in the bond market cause certain bonds to trade at much lower prices than they should. In turn, the yields of these bonds soar much higher than they should, based on their risk. We call these bonds "outliers."

It's only possible to identify these outliers by doing your homework... understanding where the bonds sit in the company's debt structure and whether they'll be paid in full.

That's where we come in. We do all the work of identifying these types of bonds for our subscribers in Stansberry's Credit Opportunities.

Since we launched in November 2015, we've recommended 30 bonds and closed 20 positions with an 85% win rate. Keep in mind... these recommendations all have legal protections that no stock can ever offer.

Meanwhile, the average annualized return of our closed positions is 20.9%. That's almost two and a half times better than the overall junk-bond market's return. If you had instead invested in the largest high-yield bond exchange-traded fund, the iShares iBoxx High Yield Corporate Bond Fund (HYG), you would have earned just 8.4% in the same span.

We even beat the return of the stock market... The S&P 500 Index's weighted return during the same period is 17.1%. And we accomplished this while taking on far less risk.

Keep in mind... we've booked these impressive gains before any panic has set in. The biggest opportunities are still ahead of us.

But that doesn't mean you can't profit today.

Editor's note: The coming wave of bankruptcies will open the door to tremendous opportunities... But you don't have to wait to start using this strategy. To show you just how lucrative it can be, we've teamed up with one of Mike's longtime subscribers. And as part of the deal, we've agreed to offer Stansberry's Credit Opportunities at its lowest price ever. Get the details right here.

"Make no mistake, a crisis is coming," Mike writes. "And if you wait until the signs are obvious to take shelter, it will already be too late." Get the details on risky junk bonds, "zombie" companies, and how this historic bull market will end right here.

Distressed bonds can be extremely profitable. Even better, you can make these investments without taking huge risks. Mike recently shared how, in one case, investors could have earned a 92% return in less than a year... Read the full story here.

Market Notes
THIS 'BORING' BUSINESS HAS QUIETLY TRIPLED IN VALUE

Too many investors only want to get behind an exciting new idea, seeking big gains from the next hot trend. But as longtime DailyWealth readers know, it’s often easier to hit a home run with a dull, established business. Companies that collect garbage or sell uniforms are investments, not speculations. That’s also the case with today’s “boring” company…

Lennox (LII) is an $11 billion manufacturer of refrigeration and heating, ventilation, and air conditioning (“HVAC”) equipment. That’s not novel or exciting. But folks will always need fresh food and comfortable spaces. While its latest quarterly results were mixed, Lennox pulled in $466 million in revenue for its residential segment… a first-quarter record. And it plans to buy back up to $400 million in stock this year.

LII shares just keep rising… They’ve soared roughly 230% over the past five years to a new all-time high. No, Lennox isn’t going to be the next Amazon (AMZN). But this safe, “boring” company still tripled investors’ money in a hurry… 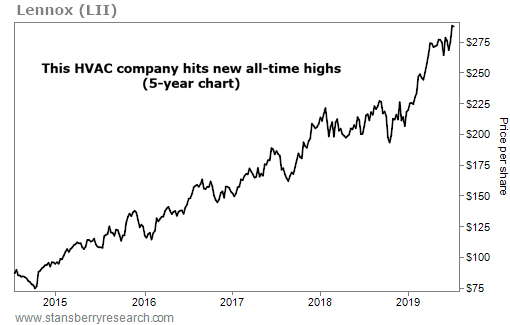