The Bull-or-Bear Outlook for 2019 Could Hinge on China
By Richard Smith
Friday, February 8, 2019 If you're asking what's in store for stocks this year, here's what you need to know...

The first possibility – one that many investors fear – is that we see a global downturn, a U.S. recession (the first in more than a decade), and a bear market in 2019.

The second possibility is that markets already saw their worst in the fourth quarter of 2018. You could count it as one of the quickest bear markets ever, with signs of a recovery already in place.

In this second scenario, bullish forces will send stocks to new all-time highs, resetting the clock on recession fears.

What might surprise you is this: A big potential catalyst for either scenario is not the United States... but China.

No economic theory has definitively established what causes a recession. But as the economist J. Bradford Delong points out, if we look at the four U.S. recessions of the past 40 years, we can see that all of them had unique triggers...

The recession of 1979-1982 took place when the U.S. Federal Reserve tried to "break the back of inflation" with sky-high interest rates.

The next recession in 1991-1992 came in the aftermath of the savings and loan crisis.

Then, the 2000-2002 recession came after the dot-com bubble burst. And the 2008 global financial crisis followed a subprime crisis and U.S. housing bubble.

So, recessions don't just happen out of the blue.

Here and now, Wall Street economists and investment bank research departments have made a wide range of estimates as to the likelihood of a 2019 recession.

But rather than play an impossible guessing game... I suggest you watch what happens with China.

One of the biggest questions facing the markets right now is this: Will the U.S. and China reach a trade deal?

The quick recovery we've seen in the major U.S. indexes – and also in crude oil, which is up more than 25% since Christmas Eve – suggests that investors are getting more optimistic. But a China deal will have to go through for that optimism to stick.

We can lay out two potential scenarios for what could happen:

The bullish outcome is the most likely... because both Washington, D.C. and Beijing have strong incentives to reach an agreement.

In Washington, the Republican-led executive branch is starting to think about the 2020 elections. The Republican Party wants a happy, healthy stock market if at all possible – not a bear market on its watch right before an election year. And delivering a trade deal with China is crucial to keep investors happy.

Meanwhile, the leadership in Beijing knows China's economy is in a tough position.

An estimated one out of five apartments in China's cities (65 million in total) are unoccupied. The country's real estate bubble is deflating. And the Shanghai Composite Index was one of the worst-performing global indexes last year.

Of course, the deeper issues causing tension between the U.S. and China are real, and hard to sweep under the rug.

However, a deal would be a major win-win for Washington and Beijing.

Last month, China made a stunning offer to buy an additional $1 trillion in U.S. imports over a period of six years. For now, President Donald Trump is still taking a tough stance. But if a new deal with a big, impressive headline number like this goes through, it could be a game changer for stocks.

Without a deal in place by March 1, tariffs are set to increase – so the pressure is on. Keep a close eye on the U.S.-China trade talks. We could see a decision in less than a month...

And it's one of the biggest factors that will decide the future of the markets in 2019.

Editor's note: Next week, Richard will discuss all the major forces at work in the markets... along with some of the most recognized bulls and bears from Stansberry Research and the broader investing world. Together, they'll answer the BIG question: What should you do with your money in 2019? Tune in for the online event on Wednesday, February 13. It's completely free... All you need to do is RSVP right here.

Regardless of how the markets move after a U.S.-China trade decision, it's more important than ever to have a plan in place to fortify your portfolio. Read more about Richard's system right here: Eight Simple Steps to 'Foolproof' Your Portfolio.

"We have a simple recipe for making money in the markets," Brett Eversole says. "Find something that's dirt-cheap... that no one else is interested in owning... and buy it once prices reverse." Right now, he has his eye on one market that could be poised to soar in 2019... Learn more here.

If you’re a longtime DailyWealth reader, you know we love making money – with or without “exciting” stocks. We’ve recently seen big gains from companies that provide everything from garbage collection to paint to lubricant spray. These businesses don’t get a lot of attention, but they keep chugging along in every kind of market. Just take a look at this “boring” business…

Lennox (LII) is a $9 billion company that makes heating, ventilation, and air conditioning (“HVAC”) and refrigeration equipment. That’s what it’s been doing for 124 years. Climate control might sound boring… But in each of the past five years, Lennox has delivered record-breaking revenue. Most recently, it brought in $3.88 billion in sales last year.

As you can see, shareholders have reaped the benefits. LII has roughly doubled over the past three years… And it recently hit a new all-time high. Until folks stop relying on heat and air conditioning, expect Lennox shares to keep grinding higher… 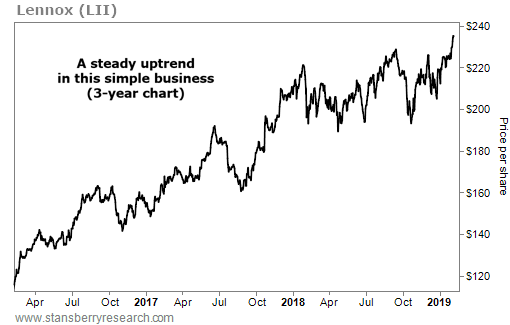